Recently, I had the pleasure of interviewing Efren Gonzalez at his home in Ajijic, a home he is building entirely from the sale of his paintings. For years he has struggled with the dream of living and supporting his family from his art; a dream he now realizes everyday, brick by brick.

Born on June 1, 1972, this 29 year-old, impassioned, local talent, stands out even in the pantheon of Lakeside greats. His paintings are intensely alive, full of color, meaning and insights into Mexico. Las Michoacanas, which graces this month’s cover, is an example of the artist’s work in oils.

“Art started with a pencil,” Efren says, “almost as soon as I could hold it,” and despite a few short detours, the journey to becoming a “working” artist began early. Efren Gonzalez grew up in Ajijic, winning local and regional drawing competitions as early as primary school. Although he preferred Art to Math and Chemistry in high school, he still didn’t know that one day it would be his career. Sometimes, he still lacks confidence, he admits.

After high school, Efren started out studying Architecture and then Plastic Arts, but shortly found that he hadn’t the patience for either. What career would suit him best? He had worked in restaurants, fabricas, and as a translator, but only to gain his daily bread, his sueldo, drawing and painting all the while, as a function of his being.

Still undecided as to what to do, Efren was offered a grant to study Art at a small college in Maryland. He made the most of the opportunity. More than anything he learned there, he was enriched by seeing in person, great works he had only admired in books. One year later, he returned to Ajijic and took up his brush.

He soon discovered that being a “working” artist meant being a “selling” artist, and for that, your work must be shown. He dutifully took his paintings to CABA, an artist co-op, which had recently opened at Lakeside to see if they would show it. It was there that Efren met his wife, Reina Galindo, who had the unpleasant task of telling the young man every Sunday, that again, his works had not been accepted for exhibition.

“She rejected me every week,” he says smiling, “and I fell in love with her, anyway.”

Married, and with his first child on the way, Efren had to make some responsible choices. He was referred to designer Billy Moon, who needed drawings for a book to be published. Efren went to Moon’s gallery to apply for the job, and listened to the requirements. When Mr. Moon asked what Efren wanted to be paid for the work Efren said, “Five Hundred Dollars.”

The sputtering Moon asked him, “What? Do you think I’m made of money?”

A few days later he returned. He presented the drawing to Moon who reached into his pocket and paid the artist on the spot. Then followed a commission for more drawings, and after that, a position in the design department. Efren worked for Billy Moon and his sueldo, and kept his young family going on the secure wages for nearly a year.

Realizing he would never get further ahead working for someone else, he confided to his wife that he wanted to make their living from his art. Would she let him try?

Reina gave her consent, but for the first three months Efren painfully remembers he was sometimes unable to afford buying milk for them. He says that all of the obstacles have made him more resilient though, more dedicated to his Art. He sold canvases in the plaza, on the street, at small exhibitions in hotels and restaurants. Then he received a commission to paint a mural for a woman on the condition that he accepted payment in floor tile. “These,” he says, pointing to the flooring in the room where we are sitting, “At the time, I didn’t even own a piece of land, but I took the job.”

Although he received only floor tiles and no further work from the person who commissioned it, someone who saw the mural was interested enough to track him down. Mal Baxter, an interior designer at Classic Design, became an enthusiastic source of reference for the young painter.

Leaving the hardships of the days when he peddled his work himself, Efren is now sought after by galleries here and in Puerta Vallarta. He is currently working on a mural inspired by the book, “Azteca,” by Gary Jennings, which deals with the conquest of what is now Mexico, by Spain. The mural, located at Escuela Saul Rodiles on Hidalgo in Ajijic, is scheduled to be unveiled on September 21, 2001, with members of the author’s family in attendance.

With continued exposure, word of mouth, and the support of a growing number of admirers, Efren Gonzalez is now a successful “working” artist, and will be, for as long as he cares to paint. He, Reina and their two children, Leonardo, four, and Paula Regina, almost two, are living in Ajijic, in the house they are building from his Art. 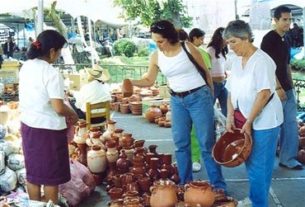