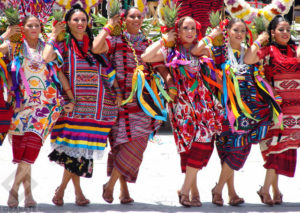 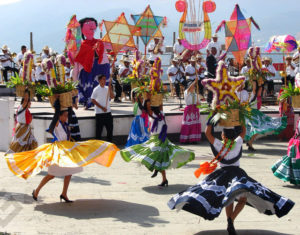 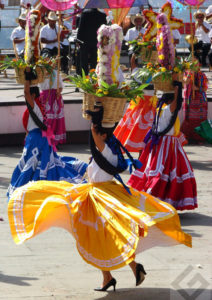 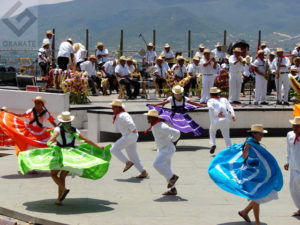 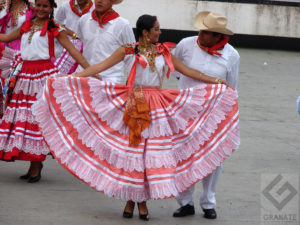 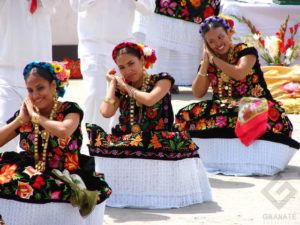 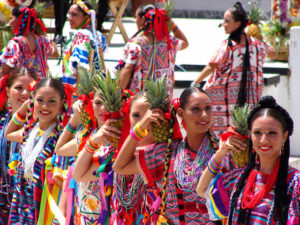 Monday, July 21, 2014, the colorful pageantry of Mexico’s Guelaguetza is reenacted once again during the Lunes del Cerro (Mondays on the Hill.

A Zapotec word signifying offering or offertory, Guelaguetza was the term used to describe the Oaxaca ceremony and celebration held each year to propitiate the gods in return for sufficient rain and a bountiful harvest.

More than three thousand years ago the indigenous peoples in what is now the state of Oaxaca began to cultivate plants to augment hunting, fishing and gathering. The most important of these was corn which formed the basis of their diet and, with the addition of tomatoes, beans, chiles and squash, evolved into a richly varied and delicious regional gastronomy. Thus the gods and goddesses involved with water and corn were vital among the hagiarchy and the tribute to them was a lively and colorful celebration of the music, dance and products of the people.

This offering of life’s gifts took place midway through the rainy season, when it was essential that the rains continue moderately and without excess to bring forth the best crops. The feast of Xilonen, goddess of tender corn, falls in this period on what in the modern calendar is July 16 and is the signal to begin the two weeks of celebration.

When the Spanish arrived in Oaxaca in 1521 they converted all the indigenous people and imposed the Catholic religion. One of their tactics was to “convert” to Catholic ways the deeply rooted customs honoring pagan beliefs. For example, razing temples and building churches on the ruins, conserving the holiness of the place but identifying it with the new religion. In the case of the Guelaguetza, the idea was to change it to a celebration of the feast on July 16 of the Virgin of Carmen and that is why the Guelaguetza begins with calendas, monigotes (giant “puppets” manipulated by persons inside them) and other festivities at the church of Carmen Alto.

The Spanish also introduced new products and techniques which resulted in changes to lifestyles and traditional dress. Where before textiles were made from cotton, now you will see silk, wool and glass beads in the clothing of the delegations to the Guelaguetza.

Overlooking the present city of Oaxaca is the hill now known as the Cerro del Fortín from the location of Aztec garrisons there in the 15th century. This Cerro was a very popular place for outings and came to be the traditional place for celebrating the Lunes del Cerro (Mondays on the Hill) when the Guelaguetza began to focus on the celebrations held on the two Mondays following July 16.

In 1932 the city of Oaxaca celebrated the 400th anniversary of its designation by Carlos V as a royal city. As part of the festivities the Lunes del Cerro were organized into the forerunner of what we may call the “modern” Guelaguetza, with representation of the ethnic groups from all the seven regions of the state. Over the past 57 years it has become a highly publicized major spectacle and in 1974 an amphitheater seating about 11,000 was built to accommodate this most impressive expression of Oaxacan folklore. Ancillary events have grown up around the basic two Mondays — some original indigenous traditions, especially in the villages, and some more modern innovations such as the contest to select the goddess Centeotl who presides over the festivities and the Bani Stui Gulal which is a dramatic presentation of how the Guelaguetza was celebrated in different epochs.

The “official” Guelaguetza is now organized and promoted by the state Tourism office (Sedetur). It is held on the two Mondays following July 16, unless July 18, the anniversary of the death of Benito Juárez, falls on Monday, in which case it is on the following two Mondays. There are a number of official events, the most important of which are the contest to select the goddess Centeotl on the Sunday before the first Monday and the Bani Stui Gulal on the same Sunday night, plus the presentation of the Legend of Donaji on both Monday nights in the Guelaguetza Auditorium. The goddess Centeotl is chosen from among the candidates sent by each delegation, not for physical beauty but for her knowledge of her area’s history, customs and traditions. The Legend of Donaji is the story of the last Zapotec princess, full of light, sound, fireworks and drama.

Monday dawns on the hill and people are already walking up the hill to the auditorium, with music, fireworks and pageantry. Around 9 a.m., the delegations and spectators begin to arrive, the seats fill up and the excitement builds. The morning is perfect with bright sunshine and no rain is permitted. Promptly at 10 a.m., the goddess Centeotl and all the delegations are presented and parade around the stage. Centeotl then takes her seat with the governor of the state and invited dignitaries (such as the President of the Republic, King and Queen of Spain, high officials and personalities from all over the world, guests of the governor for this fabulous spectacle) and the first delegation is introduced and the celebration begins.

As on the first Monday, so on the second — pageantry, music and breathtaking beauty, enlivened by the scrabbling to catch one of the pineapples from the Papaloapan, a sombrero de palma from the Mixteca, mezcal from Ejutla or any of the varied products of their region thrown by members of each delegation into the audience.

It is impossible to adequately describe the heart-stirring beauty of this spectacle in its jewel setting — the music, the color, the vivacity of the participants infecting the audience which remains spellbound until the final Danza de la Pluma around 1 p.m. and wishes that the morning would never end. You may see the dances performed in other places and it is wonderful but nothing compares to being in this place at this time taking part in the Guelaguetza.

Tickets are sold at the state Tourism offices at the corner of Independencia and García Vigíl. At La Casa de María Bed & Breakfast you may reserve your tickets when you reserve your room and they will be waiting for you on arrival. 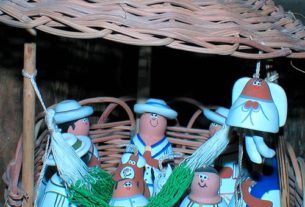