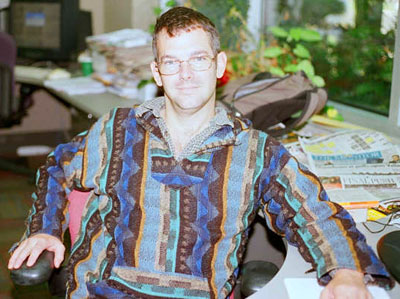 I have worked as a reporter for the Monitor newspaper in McAllen, Texas, since October 1998. I began traveling in Mexico in Feb. 2001, driving to Saltillo, Coahuila, exactly twice before deciding that buses and taxis were much more reliable (and less exhausting) than driving on my own.

My explorations of Mexico began initially to research a non-fiction narrative I was writing about a bullfighter; my experiences in that beautiful country, however, quickly took on a life of their own.

The culture south of the border has given me a welcome balance to the hectic routines of daily life. My life here on the Mexican border gives me the freedom of escaping quickly into another culture where life moves at a slower, more human pace. Often, when I begin to feel strangled by the boredom of predictability, I am drawn to the liberation of uncertainty south of the Rio Grande River. The unexpected flashes of color and human impulse energize me, and I take inspiration from the unabashed individualism that flourishes there.

I have had a life-long passion for travel, for the experience of exploring another way of life and seeing the world through the eyes of others. At age 19, I took a trip to the Amazon jungle in Peru with the Audubon Society in Portland, Oregon. I had picked up their travel brochure at an Audubon meeting in Corpus Christi, Texas, and the folks in Portland, as far as I know, still don’t know how the brochure made it to Corpus.

I’m glad the brochure did make it into my hands; on this initial trip abroad, I was immediately taken by the musical, culinary, artistic and human flavors of Latin America. Later, I had the priceless opportunity to live in the Republic of Panama for three years while serving as a U.S. Army photojournalist. During that time, I learned to scuba dive and explored old Spanish ruins. I made a second trip to Peru and also visited Ecuador.

After leaving the military in 1986, I earned a bachelors degree in English at Southwest Texas State University in San Marcos. After trying various jobs, I returned to the journalism profession and have worked for the Monitor ever since.

While writing is a full-time passion even in my free time I try to maintain numerous hobbies: painting, music, hiking, camping, cooking and snorkeling.

I’ve made two trips to Europe, but I find myself drawn to Mexico more than any other country. I have enjoyed my experiences there, the friendships I’ve made and the insights I have gained, and I have written numerous stories about Mexico for the Monitor newspaper.

My other writing credits include a story in the January 2006 issue of Texas Highways about Benito and Toni Treviño who teach people how to use native plants on their native vegetation and wildlife refuge, Rancho Lomitas. I also won the Associated Press Managing Editors award for Star Investigative Report of the Year Class AAA in 2005 for a series of stories on homeless people.

I look forward to an exciting new period of my life as I reveal my passion for Mexico to a much larger audience through Mexico Connect.

See all articles by Travis