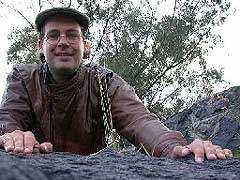 American born Jeffrey R. Bacon is a professor and research scientist at the Universidad Juárez del Estado de Durango, in Durango, Durango, Mexico. He currently teaches Ecology in the University’s Escuela de Ciencias Químicas and carries out reaseach related to Mexican oak systematics and floristics in the Área de Ecología Forestal, at the University’s Instituto de Silvicultura e Industria de la Madera. Bacon curates the University’s Herbarium as part of his research. He has lived and worked in Durango since 1994.