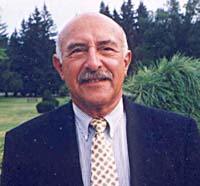 Marvin H. Perton is a freelance travel writer with “Mexico” as his specialty. For over three decades, Perton has traveled throughout Mexico, first as a tourist, then as a public relations executive for major hotel companies in Mexico (also was president of his own public relations firm), and for the past 12 years, as a journalist.

He is a charter member of the Mexico Writers Alliance, and in 1993, was awarded the Pluma de Plata, the highest award of the Mexican government to a foreign journalist.

Marvin Perton, who holds a bachelor’s degree in marketing and Journalism, as well as an MBA degree, is a new contributor to MexicoConnect. His first online article, “Tequila – More than Just a Margarita,” can be accessed on MexicoConnect now. Look for many other articles from him as he continues on his trek through Mexico. When he is not in Mexico, he makes his home in South Florida.

See all articles by Marvin H.

A small mound in the cemetery in Xoxocotlan, Mexico