This traditional Mexican meat stuffing for turkey is reminiscent of Spanish picadillo. Since only the breast — which tends to have less flavor than dark meat — is used in this recipe, the richness of the stuffing works well with the mild white meat. Cut into thick slices, it forms an attractive spiral pattern, perfect for presenting on a platter.

Heat the oil in a large skillet. Saute the onion and garlic until the onion is transparent. Add both kinds of meat and cook, breaking it up with a wooden spoon, until no longer pink.

Bone and butterfly the whole turkey breast, or have the butcher do this. Open it like a book, skin side down. Season the meat with salt and pepper.

Spread the stuffing evenly on the meat, leaving about a ½ inch border. Do not mound the meat, as this will make the turkey breast difficult to roll.

Roll the turkey breast like a jelly roll, tucking in any stuffing that falls out the sides. Tie the turkey roll every 2 inches with kitchen string.

Place the turkey roll seam side down on a rack that has been set on a baking sheet. Brush it with the melted butter and season with salt and pepper. Roast for 1 ¾ to 2 hours, or until a meat thermometer inserted into the center reads 150°F.

Remove the turkey from the oven, cover with foil, and allow to rest at least 15 minutes. The internal temperature will continue to rise during this time.

Slice the turkey roulade into ½ inch thick slices and fan out on a platter. Makes 8-10 buffet servings. 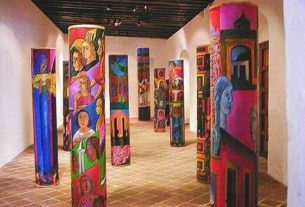 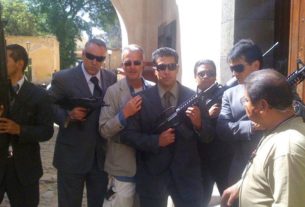