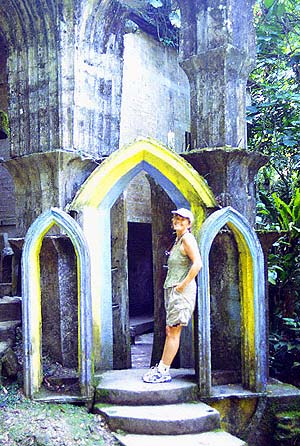 At the age of forty I left behind the roles of psychotherapist, wife and mother, and moved into the wilderness, alone, to seek a wisdom heretofore unknown. I imagined that I would live there one year, through the four seasons. At the end of the day, I had lived in my little cabin at the edge of wilderness for over five years. One never knows what soul has in store.

This solitary retreat is the subject of my first published book, Living on the Spine: A Woman’s Life in the Sangre de Cristo Mountains (“It is gentle, gracious and profound …” Library Journal.) It has recently been reprinted in a second edition by EarthTales Press. My second book, New Mexico’s Sanctuaries, Retreats and Sacred Places (Westcliffe Publishers, 2002), was a natural extension of my solitary experience. On the heels of experiencing the sacred relationship of landscape, body and spirit, I was asked to guide people to those places where they might experience a special moment. I chose the places and wrote the book.

In addition, I write for the Taos Journal of Politics and Art, “Horse Fly.” My essays have appeared in numerous magazines, including the “Santa Fean” and book collections that include Living in the Runaway West (Fulcrum publishers, 2000) and Writers on the Range (University Press of Colorado, 1998.) I was a featured writer in “Santa Fe Trends” winter/2003 article on sacred architecture and space. My travels have taken me into the Mayan lands of Mexico, Guatemala, and Nicaragua, across Canada and the United States, into France and Zimbabwe. My photos appear along with my writings in New Mexico’s Sanctuaries, Retreats and Sacred Places. I am the photographer for the book In Fire’s Way by Thomas Wolf, University of New Mexico Press, 2003.

Current writing projects include: Taos: Outpost (Recollections from the Land of Light) and To See My Breath At Twilight (Menopause and the Unlived Soul). I live and write in Taos, New Mexico, tucked between the magnificent Sangre de Cristo Mountains and the Rio Grande Gorge. As teacher, counselor and coach I assist individuals and groups with their writing efforts. Oh! and I love to teach women how to shoot.

Come and visit me at www.christinanealson.com

See all articles by Christina