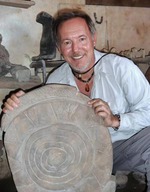 I live in Carmel – California and I am an independent filmmaker producing a television series titled Mysteries of Monterey for Monterey’s public access television station. The purpose of the show is to visit ancient sites that time has long forgotten in Monterey and elsewhere (“Mexico Revisited” was one of those shows).

I have sailed in the Sea of Cortez and traveled in the State of Nayarit, and have written several books about those travels.

See all articles by Alexander