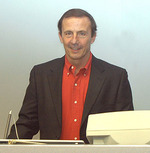 John G. Gladstein is currently Instructor of Modern Language at Amarillo College located in Amarillo, Texas. He has taught foreign language and Latin American Culture for twenty-four years in institutions of higher learning, including the University of Tennessee at Chattanooga, the University of Louisville and the University of Texas Permian Basin. He has been recognized with distinguished teaching awards and has written articles on various cultural topics for scholarly publications. He has lived for extended periods in the Yucatán and Mexico City, and has traveled extensively in Mexico, Central, and South America. He taught at the university level in Mérida, Yucatán and attended La Universidad Iberoamericana in Mexico City. Native cultures — Maya and Tarahumara — and Latin American culture are his interests. The author lives in Amarillo, Texas and spends his spare time on the Texas Gulf Coast or traveling to Mexico.

See all articles by John G.