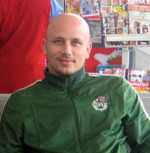 Henry Biernacki has traveled to more than 120 countries and continues to travel. He is a captain for Virgin American airlines. He holds a bachelor’s degree in romance languages and international affairs. He has lived in France, Germany, Taiwan, the West Indies and Mexico (Oaxaca, Guanajuato, and Chihuahua) before settling in San Jose, CA.

“Biernacki’s debut novel No More Heroes, is a beautifully written testimony to the art of living. It is a poetic and joyful reminder of those seemingly ordinary moments and interactions that are indeed so extraordinary. Henry Biernacki shares with the reader an uncommon sense of wonder and a profound sense of humanity. It is a rare gem in the form of a 180 page novel.”

See all articles by Henry

Wildlife of the Yucatan Peninsula: The Explorer Family’s Guide and Journal