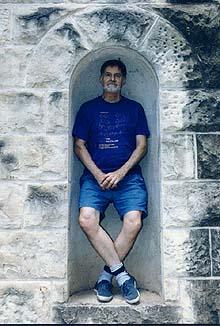 Born one Sunday morning in the piney woods of East Texas on All Saints Day in that state’s centennial year, he spent nearly half of his waking childhood climbing trees. Eventually he finished high school and enrolled in the University of Texas at Austin in the mid-fifties just after the last panty raid and graduated just before the first student demonstration. Fresh out of school, he worked on a grass ecology project back before grass meant marijuana and before ecology was a political term. From there he had a checkered career (better than a pin-striped one): high school science teacher, English teacher in a language school, bar room piano player, tour guide, museum curator, private tutor, proofreader for the Texas Legislature, assistant registrar at UT, and several other things.

In the midst of the sexual revolution in the 60s, his personal life was a mess, so he took the geographical cure and boarded a freighter in New Orleans and sailed to Barcelona. Europe, after syphilis and before AIDS, was a window of opportunity for personal growth, and grow he did. Although a friend said he abandoned his search for the Holy Grail and settled for a beer stein, he returned to the states two years later with a continental sophistication that didn’t wear off for months.

As he moved into his middle years, his life settled into a routine. Then in 1976 he met Charles Dews, and routine went out the window. Following Charles’s lead, he was to live in a vegetarian co-op, a Quaker meeting house, and a Sufi community. Five years ago, they moved to Mexico.

Although he did some technical and journalistic writing as a young man, his creative outlet was the piano. Thanks to the onset of Parkinson’s disease, diminished coordination made him give up the piano about ten years ago. He found an alternate creative outlet in public speaking through Toastmasters International. He won several competitions in humorous speaking. Then Parkinson’s flattened and softened his voice, so he gave up public speaking for writing, which is what he does today.

See all articles by David