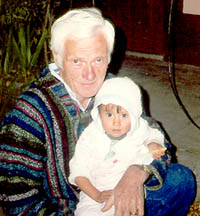 This is my little daughter, Citla

Citlali Tonantzin, and I. The picture was taken during the ’97 Christmas Season, about 4 months before her second birthday.

It isn’t easy writing about one’s self when one knows he is Revealing himself to the whole World. But here goes.

June 1941, “EXTRA, EXTRA. Read all aboutit! Germany Invades Russia.”, “Joplin News Herald, 3 cents, Paper”. A little kid hawking news papers in the streets of Joplin, Mo. It’s funny how some things stick in your mind after so many years.

1943. Central Missouri. Walking 2 ½ miles of country road to a one room schoolhouse. Living in a four room log house with a tin roof. Wood burning stoves and kerosene lamps. An out-house and dug well. A big iron kettle blackened with smoke for washing cloths. I spent my free time exploring the woods and fishing and playing in the creeks.

1945. Vidalia, Louisiana. Vidalia is on the Mississippi River, across from Natchez. I learned about math and science and literature. I learned to play ball and act in plays. I learned a lot about the pre-Civil Rights South.

1978 I found out that one of my grandfathers was Cherokee Indian, raised in Oklahoma Indian Territory.

1998 Have been living for four years in Tlaxco, Tlaxcala, Mexico with my lovely wife Chela, and we now have five children, Tavo, Karla, Vidal, Quetzal, and Citlali. I also have three grown children in the States whom I dearly love, Sager, Jordan and Ginger.

See all articles by Charles E.