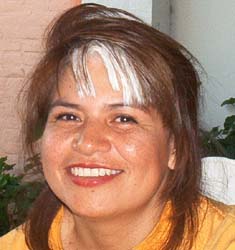 Adriana Perez Flores was born in Mexicali and moved to Guadalajara at the age of 3 months. She and her 11 siblings were all raised in a 3-bedroom house. Her parents supported the family by selling popcorn in the local parks all around the city. With other family members becoming accountants, lawyers, and dentists, Adriana decided on a legal career.

Adriana received her law degree at the University of Guadalajara in July of 1988, and completed her internship at the local Immigration Delegation in Guadalajara.

After 5 years working at various jobs in the United States to learn English, she returned to Mexico to start her career. With some encouragement from her mentor, her mother, Adriana opened her first office Lakeside in 1997.

After several moves to find her niche, she established herself in Ajijic on Calle Colon. Building an honest and reputable practice, she soon out grew of her office by the plaza. The decision to move to her current location was hard for Adriana as she had a special place in her heart for her little office on Calle Colon that brought her so much success.

Adriana Perez Flores is an Attorney at Law based in Ajijic, Jalisco for legal and immigration services throughout Mexico.
Her website

See all articles by Adriana