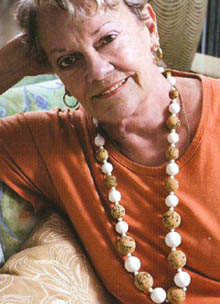 Jenny McGill and her husband, Howard moved to Puerto Vallarta, Mexico in 1973. She was appointed consular agent by the U.S. State Department in 1982, and spent the next fourteen years in that position.

Upon retirement, the McGills sought out the tranquility of the western Sierra Madres in a small village, Talpa de Allende, Jalisco. There she devotes her time to writing, promoting local artists, and gardening. She says, “My love of robin-egg-blue skies, breathtaking sunsets that only God could paint, and music that falls softly on my ear, is reason enough to be in Mexico.

Some natives consider Jenny to be more Mexican than a frijol.

The couple resided in Talpa de Allende for several years.

See all articles by Jenny

Mexican master ceramist Jorge Wilmot: the interval between before and after