My friend and I just returned from a special four-day getaway. At the recommendation of friends, we stayed in the Dolphin Cove Inn, known to locals and people giving directions as Playasol Las Hadas. This is important, because only the advertising and brochures bear the name Dolphin Cove Inn. Physically, there are no signs that match the promotional literature. Yes, we got lost, but a phone call cleared up the confusion.

Previously, I’d only viewed the Las Hadas area from across the bay. The Las Hadas area reminds me of the magnificent island of Santorini in Greece… including the hundreds of stairs connecting the condos to the beachfront, swimming pools and restaurants. At the end of our mini-vacation I had a telltale sunburn and well-developed leg muscles. But my, oh my, it was worth it.

Here’s a way to live the life of the rich and famous for a fraction of the cost. Stay at The Dolphin Cove Inn. The 40+ studio and one-bedroom condos are of white stucco and snuggled into the mountainside, all with breathtaking views, kitchenettes and ample bedrooms that include a table and chairs as well as a desk. They’re nicely equipped with a blender for margaritas, coffee pot and toaster.

Our room was close to the parking lot and up about three sets of stairs from the beach. The room was light, airy with both a fan and air conditioning. There are two swimming pools — one for the adults and one for the children. Next to the pools is a great, reasonably priced restaurant, all with fantastic views of the bay. Golf, tennis, fishing, and water sports are only a short walk away. We enjoyed daily maid service with fresh linens and washcloths, which seem to be a luxury in most Mexican hotels.

The condos are located next door to Las Hadas Hotel with it’s fantastic beach and amenities. This was a real asset for us. There is a gate at the beach entrance with a guard. We smiled and said “buenos tardes” and he let us right in. We dined the first day at their seafood restaurant just past the gate. We found it very expensive. The second day, we approached the guard with a beach bag full of towels, books, snacks and drinks. He asked if we had reservations. I replied, in Spanish of course, “Do we need them for lunch?”

He then asked if we were staying at Playasol Las Hadas. We nodded and gave him the room number. He looked at a list and opened the gate. Officially, I understand you can buy a day’s pass at Las Hadas for 100 pesos and get into the Las Hades Hotel grounds, but unofficially, a smile and, as my neighbor discovered, a small tip will get most of us in. That night we ate at the outside buffet restaurant. The salad bar was fantastic and after gnoshing all day, we found that splitting a hamburger was sufficient.

I love their beach. Open-air tents are provided along with comfortable chairs and lounging mattresses. The water is perfect and a short swim takes you to one of two floating rafts where one can indulge in instant sunburn if they are of the Norwegian persuasion.

One of the things I most enjoyed about staying on this side of the bay was the lack of peddlers. No one bothered us the whole four days asking if we wanted our hair braided or imploring us to buy silver jewelry. The waiters serve drinks at the beach, but after paying 45 pesos for a glass of wine the first day (55 including tip), I decided to bring my own. That’s getting right up there with California prices. I should have worn my “I work for wine” t-shirt.

We drove to Manzanillo from Ajijic. It took us about three and a half hours. The roads are nice all the way and it was convenient to have a car to drive into the city when we’d had enough sun, although there are ample buses and taxis if you prefer to take the bus or to fly into Manzanillo. There’s a big Commercial Mexicana shopping center only a mile away and many wonderful restaurants to choose from. I indulged myself with lobster one night as we watched the sun set and listened to live music.

And, on the way home from Manzanillo, my friend’s car started overheating. We’d just passed the halfway mark and she pulled into a Pemex gas station. Now these guys aren’t mechanics, they’re just trained in pumping gas and replenishing oil and coolant. However, we had four men and two boys working on cooling down the engine for well over half an hour. Finally, they put one of the boys, a 12-year old named José, into our back seat and instructed him to take us to the family mechanic.

We arrived there and the mechanic poked around. Said the thermo sensor wasn’t working and jury-rigged a fix. He gave Teresa a cable to use if the fix failed before we got home. He wouldn’t take a penny.

Two days later I was in Guadalajara with another friend in my Explorer. On the way home, it started overheating. Of course, this was Sunday and no mechanics work on Sundays. We made it to a gas station about 1/2 hour from home where the young boy (no men for me) spent about half hour pouring water and coolant into the radiator. Finally, the needle moved off the danger spot and I chanced heading up over the mountain. We coasted down into Chapala and into the next Pemex. Same story. Another half hour of cooling down the radiator. Now, I’m about 10 minutes from home and don’t want to leave my car in the street, so I chance it. One-half mile from home, the engine’s making horrible noises, the needle is beyond danger and steam is escaping from under my hood. I pull over to a side road and the car just stops. The engine has given up the ghost.

Some teenagers were close by, buying fruit drinks from a street vendor and I asked them to push it off to the side of the road. We walked home from there.

The next day, my friend drove to the mechanic, asked him to come to my house and get my car key, which he did and he took my car into his shop. It’s very bad news. One of my heads is cracked and the plastic radiator is damaged. It looks like a $250-$300 US repair bill. He hopes to have it done by Friday.

I guess the moral of this story is, “Don’t drive on Sunday.”

I only wish this could have been an April Fool’s joke, but no such luck. On the bright side, my folks are visiting from Boise the first two weeks in April. I’m looking forward to that, and I’m planning a two-week trip to Sardinia in May with a life-long friend. So all in all, things aren’t too bad, are they? 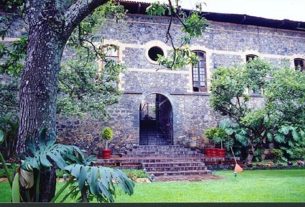