We were snapping wedding photos in the atrium of the church – that’s the big square in front of old Mexican churches where the Indians gathered to hear Mass – when the “next” bride and her wedding party arrived and politely shooed our party away.

We couldn’t complain. “Our” bride had shooed off a “previous” bride an hour earlier. It was evident that this historic church was holding a wedding every hour on the hour – and these were fashionable weddings, not cheap.

So it’s paying for itself. How many other old churches can say the same? And how many others are being kept open only as tourist attractions? In this colonial city there is no such thing as a new church in the city center. But there are fifteen old ones. And those percentages are probably true for most of Mexico’s colonial cities.

So we decided to investigate the “profitability” of old downtown churches. I should explain right here that my companion, Delia, has a colonial mind set. If we’re lost downtown she comes up with things like, “Well, over there is the cupola of XYZ church (she knows all fifteen by their distinctive cupolas) and therefore we must be on ABC street.”

Are we going East or West?

“Well, I don’t know but we’ll come to QRS church in a few blocks.”

That’s pure colonial thinking from the days when church spires marked the boundaries of the barrios and distances and directions were taken from them. The points of the compass were for sailors to worry about – or for people who came along later with computer-type mentalities.

Like me. I saw I would have to prove that we computer-types are valuable, too. We quickly found another church doing a brisk wedding business. As we had noticed in the first church, amidst its outside stone carvings, we could make out an unusual carving of a heart pierced by an arrow – a really memorable thing to see. The first church was named “San Agustin,” and this second church was named, “Santa Monica.”

So to prove the value of the computer-type mentality I went home, powered the computer up, typed in the word “Augustinian,” and in a second the good Augustinian friars furnished me with the logo of their order which was – guess what? – a heart pierced by an arrow! And their biographical info about St. Augustine said his mother was called Santa Monica! No wonder they carved the logo of her famous son on a church named for her! They even carved his bishop’s miter. 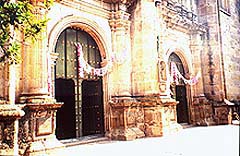 But why would there be two Augustinian churches built within seven blocks of each other? The architecture of the church of Santa Monica was very different from the church of San Agustin; it had twin entry portals on one side instead of a single impressive entrance like churches usually have.

So, back to the computer. An expert on church architecture said the twin portal entry was the way nuns of nearly all Catholic orders built their churches, which proved to us that the builders of Santa Monica were indeed nuns and were of the Augustinian order. They were called Agustinas Recolectas, we learned later.

Doesn’t the word “Carmen” sound close to the word “Carmelite?” We thought it did. We thought there might be a connection between the church “del Carmen” and the Carmelite order of monks and nuns. At the Carmelite website the monks showed us their logo. It consisted of a cross, flanked by two stars, seeming to rise out of a mountain. We were able to find that logo on the wall of the church del Carmen, just as it had been carved hundreds of years ago. It’s now a popular cultural center. In similar manner we identified the logo of the Dominicans as it had been carved on their busy old church.

And we hereby want to hold up for public censure the writer of one of the big-selling guidebooks who wrote, in what must have been a headlong dash through Mexico, that the logo of the Franciscans is the skull-and-crossbones – as if they were pirates! Go to the Franciscan website and learn that the logo of those gentle folk is two human arms, crossed, with no hint of anything else in the design.

All fifteen old churches of el centro are in use – but not all had logos we could read. We found only one church, closed most weekdays, that was being preserved for purely historical purposes. It’s the best preserved example of a “fortress” church in this city, consisting of one nave, windows high up as if expecting Indian attack, and quarters for the priest inside. Its large atrium and the walls surrounding it are perfectly preserved and in the middle still stands its atrial cross dated 1643. The interior arches are of a very old style. There are no monastic logos here; it was built by the local diocese.

And that’s a handy watershed in determining old churches from new. With the exception of cathedrals, nearly all the old churches of Mexico were built by monastic orders. After 1860 church policy changed, the local dioceses built and staffed churches, and the use of logos on churches was discontinued.

So we know, when we see a monastic emblem on a church, that it was built before 1860. And if you have a computer-type mentality you will also know if it was built by monks or nuns, and to what order they belonged. 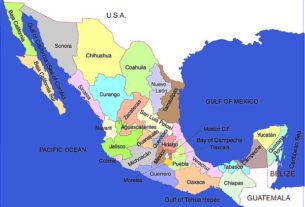 Embryography of a jeweler Raúl Ybarra