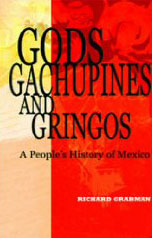 I have about fifteen feet of shelf space devoted to books about Mexico and novels set (at least in part) in Mexico. I have one foot of space for favorites, which include Carl Franz and Lorena Havens’ The People’s Guide to Mexico, Jay White’s The Rattler of Zacatecas, James Carlos Blake’s The Friends of Pancho Villa, and more recently, C. M. Mayo’s The Last Prince of the Mexican Empire. I have just added Richard Grabman’s new book, Gods, Gachupines and Gringos.

Here’s what the back cover says about it:

“The first complete history of Mexico for general readers in many years, and maybe the very first intentionally non-academic history of Mexico, Gods, Gachupines and Gringos is a solidly researched introduction to a surprisingly multi-cultural, multi-faceted nation.”

“Always conscious of the outsiders, the Gods, Gachupines and Gringos of the title, Grabman accepts Mexico as it is, not as we might like it to be nor how it possibly should be, with surprising wit and humor.

Gringo, a corruption of griego – Greek – and “not a pejorative at all,” simply means “outsider” and in this book gringo is used “as it is used in México – any non-Spanish speaking foreigner.”
Gachupín is pejorative.

“Originally a Náhuatl word referring to the spur on a fighting cock – by analogy, applied to the spurs a horseman wears – it became a rude term for the Spanish overlords: originally the only people who could ride a horse, and who wore spurs.”

The first section deals with the Pre-Conquest, “Ten thousand years (more or less) in a few paragraphs,” followed by the rise and fall of civilizations like the Olmecs and the Maya until the “meanest sons of bitches around… the people we know as the Aztecs,” after years of wandering in the desert arrived in central México and took over… that is until the Spanish arrived in 1519 and took over. Here and throughout his book, Grabman points out interesting details that are not generally known. For example, “The Mexica never called themselves Aztecs. The people came to be known as ‘Aztecs’ because of a mistaken translation by a French scholar.”

The last section deals with recent political activity in Mexico, the 2006 presidential campaign with Obrador and Calderón slugging it out. López Obrador as presented by Grabman is a very different candidate from the Obrador presented by the American press:

“López Obrador was not campaigning on a simple antigringo platform, but he was looking to renegotiate NAFTA to correct imbalances in agricultural and industrial policy, for continued Mexican government ownership of PEMEX and for loosening economic ties to the United States in favor of closer ties to Latin America, the European Union and the Asian countries. In U.S. media, he was described as a ‘fiery leftist’ or a ‘populist.’ ‘Populism’ – in mass media publications and even in military manuals – was described as a threat to the United States second only to foreign terrorism. Whether dispatched by the Bush administration or hired on their own, U.S. political consultants working for Calderón used every opportunity to describe López Obrador as a dangerous radical, a megalomaniac or simply a person wasteful of public resources.” Even so, “it appeared that López Obrador would be elected president on 6 July 2006. However, as vote counting progressed, a statistically improbable number of votes for Calderón came in, putting the PAN candidate only .58 percent ahead of his rival.”

Between the Pre-Conquest and the present, there are many other surprises.

At the time of the conquest, Tenochtitlán (which became Mexico City) “was larger than any city in Europe, and may have been the largest city in the world at the time (as Mexico City is today)…. It was cleaner and better organized than anything the Europeans knew.” Furthermore,

“Medical and dental care was well above European standards. Mexican doctors had a better knowledge of the human body (perhaps learned from Mexican chefs) than the Europeans had. The Aztecs had a wider range of pharmaceuticals (mostly from herbs), effective birth control methods and skilled surgeons.” In a footnote, Grabman adds that “The ‘pill’ – which revolutionized sexual relations in the 1960s – is a synthetic chemical version of an herbal recipe learned from traditional Huasteca healers.”

We also discover that the real weapon that “conquered the Americas” was not the military power of the Conquistadors but smallpox. It “entirely wiped out” the indigenous Cubans, and the Aztec empire – which had a population “somewhere from nine to twenty-five million” in 1520 – would, within a hundred years, “have only a million people.”

Even before Cortés had completed the conquest, he asked King Carlos for missionaries. To the surprise of many, Carlos sent Franciscan monks, “not an obvious choice,” and “they weren’t particularly known for diplomacy, administrative skills or scholarship.” It turned out to be a very good choice, however, and the first twelve “(naturally, they were called the Apostles) astounded both the Spaniards and the indigenous people by walking from Veracruz to Mexico City – barefoot. To preach to the indigenous people, they set about learning the local languages and peoples.”

“The Catholic Church ended up as the largest landowner and richest single organization in México. There were no banks, so the Church was also the biggest lender in the colony. Besides church buildings, schools, monasteries and convents, they owned everything from haciendas to apartment houses in Mexico City, ships, mines and factories. They even owned the largest pawnshop in the world, the Monte de Piedad (still in business, although the government took it over in the 1850s).”

As we approach the successful rebellion from Spain, a new cast of characters come in, including the elegant and refined Jean Lafitte – the gay pirate of New Orleans who time and again eluded Spanish authorities. And a few short years later we are introduced to the members of The Querétaro Literary Society who actually fomented and organized the rebellion. One finds their names on street signs in every town in Mexico: Allende, Aldama, Hidalgo, who marched their army of 12,000 “farmers, workers and miners” carrying “sharpened farm tools, pitchforks, clubs and axes” to attack Guanajuato, “the richest city in the world at the time.”

Grabman often charms us with little details that other histories of Mexico pass over. He asserts that Santa Ana

“did more for the Mexican economy in exile than he ever did as president…. For a time, he lived on Staten Island, New York, where he rented a room from a candy maker. North Americans had poor dental hygiene and paid no attention to how their teeth looked. Mexicans, including Santa Ana, worried about their teeth, which they kept clean by chewing chicle, a rubbery plant sap. The candy maker thought the ex-general’s chicle tasted awful but wasn’t bad if it was mixed with mint and dipped in sugar. He sold Santa Ana’s candy-coated tooth-cleanser as Chiclets. Mr. Adams, the landlord, became rich and famous as the inventor of chewing gum and created an entirely new agricultural export for Mexican farmers. Santa Ana never received the credit nor any profit from the idea.”

Grabman does not gloss over the U.S. involvements in Mexico (no one could call them honorable “foreign relations”). He believes that between Henry Lane Wilson [U.S. Ambassador to Mexico and no relation to the president] and Woodrow Wilson… more violence was unleashed in México than by any foreigner since Hernán Cortés.” Attempting to assist Carranza, Woodrow Wilson, without being invited, actually sent U.S. troops into Veracruz, once again displaying the arrogant idea that the U.S. was really “in charge” of Mexico. He did not consult Carranza first, who was the “legitimate” Constitutional Chief of México. Carranza ordered Wilson to immediate evacuate Veracruz. “Wilson was furious, but Carranza had made his point. He… was México’s legitimate leader, and only he had the right to determine México’s foreign policy.” Latin America sided with Carranza, and “the United States was again seen as the aggressor in México.” Grabman tells us the official name of Veracruz was changed to “Three Times Heroic Veracruz – its citizens had risen against invaders from Spain once and from the United States twice.” That U.S. military intervention “was solely for Woodrow Wilson’s political benefit. Bill Clinton finally offered an official apology in 1998.”

Are you a Pancho Villa fan? Grabman tells us Villa obtained “marriage certificates for at least twenty-thee wives, making him one of the champion bigamists of all times. None of his wives ever spoke of him as anything but loving and gentle. His many children, both by his wives, by several girlfriends and by the one-night stands, all remember a particularly fond and doting father.

Villa was a revolutionary in more than one way.

“He had made his hacienda a model farm along the lines of Madero’s visions. It had the schools, clinics, decent housing, its own electrical plant and telegraph office. Like the old haciendas, it had a company store, but with a twist. The hacienda was too far from Hidalgo del Parral for the workers to go shopping, so the hacienda bought wholesale and sold items below retail to workers and neighboring villages – a sort of revolutionary ‘Sam’s Club.'”

Gods, Gachupines and Gringos no more resembles the typical “history of Mexico” book than a rushing river resembles a dried-up arroyo.

I was reading the book at the Lake Chapala Society in Ajijic this morning when a couple of buddies joined me. I told them about the book, and read them a few of the passages above as a little sampler. When I finished I looked up. They responded in unison, “Where can I buy a copy?”