For the second year in a row it was a time of drought in Mexico. At the time of year when the life-giving rains should have been falling each day, they had come and gone, dropping just enough moisture on the crops to stir up the dust.

A peasant living in the poorest barrio near the village of Ajijic was having a hard time growing enough stunted ears of corn and dwindling vegetables on his tiny patch of poor land to feed his family. As the drought deepened, the peasant ate less and less, saving everything to feed his wife and large number of children.

One day, so faint from hunger he could hardly drag himself to his field, the peasant realized that if he didn’t eat soon he would die from hunger and his family would be left alone and starving. In desperation, he decided to steal one of his neighbor’s spindly chickens, take it up in the mountains, and cook it and eat it all by himself.

He waited his chance, and one day noticing his neighbors were leaving for a walk to the fishing village of Ajijic in hopes of trading a chicken for fish, the farmer crept into his neighbor’s yard, and grabbing a chicken stuffed it in a sack.

Hunching down, he began climbing up the mountain, slipping on the rocks loosened by the powdery soil. Finding a spot hidden from view above and below, he cleaned the chicken and set it to roasting over a fire on a spit he made out of sticks.

As the chicken cooked, he spied a man coming up the mountain, dressed in a dusty flowing garment and leaning on a staff. Quickly throwing a sack over the chicken, the fisherman leaned back against a rock.

“Hello, my good man,” said the stranger. “What are you doing up here all alone?”

“I came here to collect firewood and stopped to rest,” said the farmer. “What are you doing here?”

“I’ve been meditating alone in the mountains for the last couple of days, now I’m on my way to the town of Ajijic,” said the stranger. “I smelled the odor of chicken cooking, and I’m so weak from hunger I stopped to ask if you would share a small portion of it with me.”

“It’s been more than three days since I had a meal myself, stranger,” the farmer answered, “And not eating makes me cold. I built this fire to warm myself.”

“The smell of roasted chicken is very strong here, my friend. Are you sure you have nothing to eat?” Asked the stranger.

“Okay, stranger, I’ll be truthful with you,” sighed the farmer. “I brought a chicken up here to cook because I’m so close to starving, I promised myself I would eat it without sharing it with anyone.”

“You’ll share your chicken with me when I tell you who I am,” said the stranger with a beatific smile.

“I doubt that,” said the peasant. “But tell me anyway, who are you?”

Opening his arms in embrace, the stranger replied: “I am God. Now, will you give me a piece of your chicken?”

Jumping up with more energy than he’d had for days, the farmer answered in a strong voice. “If you are who you say you are, I am more certain than ever I will not share my chicken with you. You only distribute the bounties of life to your favorites. To some you give large haciendas with land fertile enough to feed entire villages and sustain large herds of cattle. To others you give horses for riding and burros for tending crops. You even provide some with cows and goats that give milk and good fresh meat for feeding their families. But to peons like me, you give only poverty and hunger. We poor ones can’t even afford to feed our children and send them to school. No, Señor, with you especially, I will not share my chicken.”

“I am sorry you feel bitter, my friend, but I bless you anyway,” God replied, and continued on His way.

As God disappeared down the path, the peon had just taken his chicken off the fire when he spied another stranger walking up the mountain. Throwing the sack back over the chicken he again lay back against his rock.

“Good morning, friend,” said the stranger. “Will you share that chicken you just took off the fire with a hungry stranger?”

“I have no food to share. I built this fire just for warmth,” replied the farmer.

“I think you are hiding a cooked chicken under that sack,” said the stranger with an impish grin. “I guarantee, you’ll share with me when I tell you who I am.”

“I’m sorry, stranger,” answered the farmer. “I do have a roasted chicken, but I will not share it. Why God, Himself, just passed, and I gave Him the same answer I’m giving you. But tell me anyway. Who are you?”

“I am Death,” the stranger replied, and taking off the large hat he wore, dropped his head to show two small red ears sticking up from the sides of his head.

With that, the peon brought out the roasted chicken he’d been hiding under the sack, and standing with a sweeping gesture, invited Death to join him.

This is one of the stories that appear in Ross-Merrimer’s latest book: “Tall Tales & True Stories of Mexico.”
Published or Updated on: January 1, 2006 by Ruth Ross-Merrimer © 2008 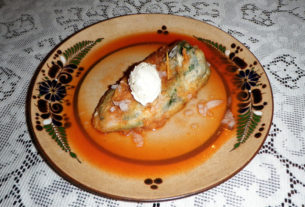 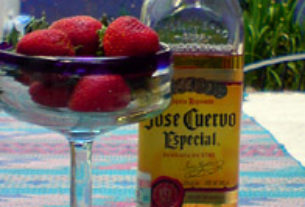