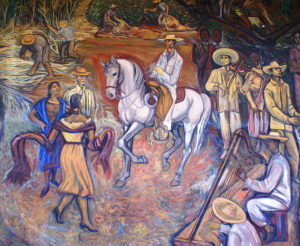 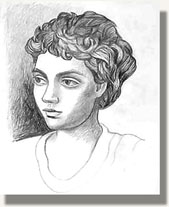 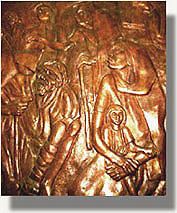 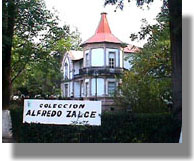 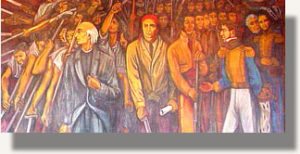 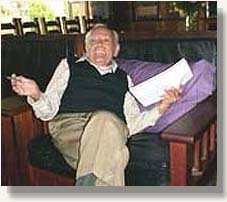 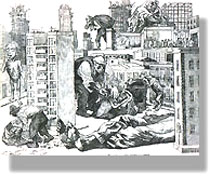 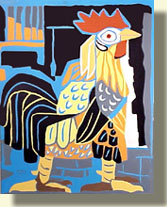 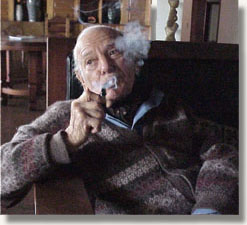 He was born in Patzcuaro, in the state of Michoacan, on January 12, 1908. During his early years he became friends with Mexico’s older great artists, including Rivera, Tamayo, Siquieros, Orozco, and Kahlo. He founded art schools and organizations which still function and are of current importance. Sotheby’s describes him as “the most important living Mexican artist up to date.” When the President of Mexico last visited the Vatican, the one gift from Mexico chosen as a gift to the Pope was a small painting of a Mexican village painted by Maestro Alfredo Zalce.

Unlike other artists, Zalce has spent an entire lifetime avoiding fame and fortune. He simply wants to paint. His artistic versatility is partially demonstrated by his total mastery in producing art with oil, acrylic, batik, pencil, watercolor, engraving, serigraph, bronze, stone, ink, pastel, ceramic, monotype, and on and on. His art has been exhibited in every country of the free world, and his numerous gigantic murals and statues represent a vital part of Mexican history. Zalce nevertheless remains a humble and people-loving man who would rather draw and paint than sell art. He hasn’t dealt with art galleries because they only want him to paint what they can sell, and he paints for enjoyment rather than money. Nevertheless, celebrities and politicians worldwide wait in line for years to obtain artwork from him.

Zalce has earned almost every available honor for artists, which he has usually accepted against his will. After declining the “Premio Nacional de Arte” (Mexico’s highest honor for artists) two times, because with it came fame and money, he finally accepted in 2001. When the Government of Michoacan changed the name of its museum of contemporary art to the “Museo de Arte Contemporaneo Alfredo Zalce” (pictured here) he had to be tricked into attending the inauguration ceremony or he would not have attended. He loved being with the people at the event, but would have declined having his name used so prominently.

Probably the first art that Zalce produced was at the age of 6 or 7. He had made drawings on the white parts of a linoleum floor which featured large white and black square patterns. He says that his drawings were not very good, but that his Mother, a professional photographer as was his Father, had complimented the works rather than punishing him for drawing on the floor. This encouragement from her may be what prompted him to continue drawing. Zalce feels that if a person cannot draw with skill, he or she cannot be a truly fine artist. He also feels that along with artistic talent, imagination is necessary. Neither is adequate without the other—talent and imagination. If one uses no imagination yet produces art to the perfection of a photograph, why not just use a camera? Zalce is quite capable of producing art to the perfection of a photograph, of course.

In more recent years he concentrated on “batik.” Batik was probably developed in Java, and is normally thought of as a way to make patterns on cloth, using a wax process to keep the colors from bleeding into one another. But with Maestro Zalce, batik became a way of producing fine art. Since it requires days to produce due to the wax processes, and since errors made are uncorrectable and require that the cloth be washed and re-used, he considers his works in batik to be as or more important than his watercolors.

Through his skills in drawing, he became one of Mexico’s first acknowledged great engravers. He has made engravings using all engraving techniques. His plates have included zinc, bronze, wood, and linoleum, but all engravings first required skill in drawing.

Zalce considers one of his hundreds of engravings, “Mexico — Transforming into a Major City” to be somewhat autobiographical. One night on arriving at his home, located in Mexico City at the time, he told the taxi driver, “Let me out by that mound of trash over there.” The city was outgrowing itself. When he left the taxi he saw a man, not drunk, talking to a dog that was eating from a trash barrel. The man told the dog to leave that trash alone because it could eat anywhere and he had to find food for his entire family. This inspired Zalce, and the engraving shows hunger, crime, desperation, large buildings under construction which caused much noise throughout the nights, as well as the man and the dog. Zalce says he couldn’t even give this large engraving away at the time because Mexicans love their country and didn’t like the concept of crime and poverty. This work was produced in 1947 and is just as true today for any large city in the world.

As with all of Mexico’s revolutionary muralists, Zalce’s murals include morals. In his mural “Abogados”(“Lawyers”), located in the Procuraduria General de la Republica (Federal District Attorney’s building), Zalce shows lawyers hiding their faces as they uncaringly step over the body of a losing client. A historical mural, which is some 280 square yards in size and is located in the Palacio de Gobierno in Morelia (State Capitol building), pictures on one section Spanish General Iturbide extending his hand in friendship to Mexican General Guerrero. On closer examination, the extended hand can be seen to be covered with the blood of Mexicans and that Iturbide is hiding a crown behind his back, because secretly he wanted to be Emperor of Mexico. Another huge 17 yard long bronze (a section shown here) located in the Camara de Diputados in Morelia (House of Representatives), shows people in poverty and a document in the hand of Mexican General Morelos to teach the politicians working in the building that they work for the people who need them, not the other way around. In one of Morelia’s small parks stand three huge cement columns, “The Estelas.” On all four sides of each Estella, Zalce carved images representative of Mexico’s three constitutions. Also, in Mexico City, Zalce’s giant murals contribute to the atmosphere of the world famous Museum of Anthropology.

The name “Zalce” is not a household word only because Zalce has never promoted his art nor permitted others to promote it, including galleries. He would not accept promotion, while many other artists relish it. This does not mean that he is not one of the best artists, or perhaps even the all-round very best artist ever produced by Mexico. Zalce’s accomplishments and skills are only now becoming generally recognized, and his works are just now beginning to be considered of great value. He doesn’t like that because he wants people to enjoy his art, not the financial value of his art. Those purchasing his art directly from him are never his clients, but rather are always his friends. Everyone loves the man and his acute sense of humor. Zalce always has time for people, and is never too busy to spend as much of his time with friends as they wish. He is and has always been surrounded by his people, many of whom are his loving lady admirers.

Zalce has been consumed with art since his childhood and is one of the few artists that has continued painting, rather than dedicating himself to abstract art of questionable integrity. Alfredo Zalce is one of Mexico’s better kept secrets, one of its finest human beings, and is very much a living legend.

Sam Houston A., author of this article, worked as lead TV weathercaster in Albuquerque, Denver, Washington D.C., and San Francisco prior to retiring in Mexico in 1986. He has been an admirer and a friend of Maestro Zalce since they were first introduced by a member of Zalce’s family in 1990. Between 1990 and 1999 Sam traveled to Morelia from Mexico City almost every month to visit with Maestro Zalce, and when possible, to acquire art. His “Houston Collection” of the art of Alfredo Zalce is considered to be one of the the finer Zalce art collections. It can be viewed along with much more information about Maestro Zalce with a mouse click here: zalce.com 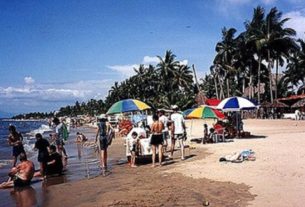