Semana Santa in Morelia means a vacation at home for me. For one thing, I don’t want to become a statistic by hitting the open road, and for another, I don’t like crowds. But most importantly, I bask in those times when the help are gone and it’s just me and my Doberboys.

By Thursday, the road to Patzcuaro was beginning to resemble the Dan Ryan Expressway crammed into two lanes. Some folks driving a Mexican-plated car must’ve really been lost, because they asked me, an obvious gringa with Texas plates, the way to Uruapan.

Walmart and Costco were booming with more shoppers than during Navidad, so we darted in just for the bare necessities. After all, the cocina economica down in Col. Vista Bella was cooking up some much-promised tortitas de camaron. Con romeritos.

Friday morning started with a jaunt to Super Leyva for the daily newspaper, LaVoz, but somehow I found myself sidetracked by street vendors selling fried fish. The newspaper was sold out anyway, but I treated myself to a breakfast of fried fish and freshly squeezed orange juice.

Friday afternoon turned into an invitation to Ramiro’s house for comida, and that’s always gourmet dining. His wife, Lupe, who cooked at the Villa Montana for years, is a reigning goddess of fine cooking, grease-free with just the right seasoning. Pescado frito (I am in heaven, fish twice in one day!) and sopa de mariscos, served on their third-floor balcony overlooking the city. Pan de leña and tortillas, hecho a mano. To top it all off, the regional Viernes de Dolores “Lágrimas de la virgen,” agua de betabel, a refreshing blend of cooked beets, orange and banana slices, garnished with shredded lettuce. A pitcher now sits in my refrigerator.

Ramiro and Lupe’s kitchen serves up the best food in all of Morelia, and fortunately, it remains an exclusive club. After all, where else could we engage in our favorite activity –- dishing others! Whoops, I mean discussing current events. No one knows personalities better than our local Cholly Knickerbocker, but I’m sure not going to repeat any of it here!

On the way home, I meet up with the Procession of Silence. The ‘hood had been a dead zone, not even the usual dogs barking. At least two thousand mortals carrying lanterns marched, well, in silence, a black-clad Mary bringing up the rear. Now, most of those walking along were locals whom I recognized and sort of expected, but along with them were the cholos, and in a strange way, they were part of the community for this small slice of time.

This morning I decided that I absolutely must go downtown for no apparent reason, so I rang up a friend to join me for breakfast at the Virrey de Mendoza. The dining room’s packed when we arrive, but we’re served coffee, complete with silver service, in the lobby while we wait. Chilaquiles con pollo for me, and huevos Tarascos for my friend. $120 pesos for both of us. White tablecloths, elegance, and most of all – live piano music!

Afterwards on our way to the Museo del Estado, we amble over to check out the Hotel Alameda Colonial, and Casa del Portal’s new gift shop alongside it. Morelia, and its new stone sidewalks, just keeps getting better and better. And hotel occupancy is at 100%. The museum’s decorated in papel picado in purple and white, each piece hand-cut by Monica, the local expert whose students’ work was featured in an incredible exhibition last Muertos in Patzcuaro. This time, Monica’s creating papel with tiny dangling butterflies and suns, all sort of done in freehand.

The art show at the park beckons, and surreal Jesus seems to be the theme of the day. Over at the Conservatory of the Roses, all is quiet in its peaceful courtyard. Two madrigals step out, clad in black velvet, headed for the main plaza. Even in 90-degree weather, there’s nothing like men in tights.

It’s time to head back home, but we’re lured by an open parking space right in front of the Casa de Morelos, and what the heck – I haven’t been there for a while. If Jose Ma. Morelos can campaign throughout Mexico on horseback (did you know he traversed the distance from Huetamo to Uruapan in a single month’s time during one campaign?), I’ve got time to contemplate what he did for Mexico.

Back home, my siesta’s interrupted by the sounds of a band outside! Yes, it’s the toro! Bearing a giant jester with an 8-ball in each hand. The parade stops, as if it already knew I wanted to run back into the house for my camera. And the toro poses – with one simple request. That I kiss the Judas of my choice. I had no choice but to bestow a beso upon the cutest of the lot – a young man in black-face, dressed in purple velvet, an earring dangling.

Tonight is Saturday night, and the drums and crazy band repeats the rhythm throughout the ‘hood. Goodman’s running back and forth in the yard, testing out the motion-detector lights to be sure they’re working, and all’s well. Who know’s what tomorrow will bring? Only one thing can be certain – Monday will definitely be St. Lunes.

Pesach? Well, that sort of found itself passed over this year. Maybe I’ll get around to organizing a seder next week. Or the next.

Semana Santa in Bahia de Kino is not really a religious holiday. Rather it is Spring Break, July 4, Labor Day and Easter all rolled into one.

The 2 major streets from Old to New Kino have become one way streets. The entire infrastructure has undergone a metamorphosis. We have police on motorcycles, navy patrol boats on the sea, quads with Marines on the beach, a REAL ambulance, portable emergency medical stations, lifeguards with lookout towers ,helicopters,mechanical street sweepers, garbage cans, parking regulations, tow trucks to transport vehicle casualties back to Hermosillo( or the wrecking yard).

Vendors are selling kites, tubes and other floating devices, T-shirts, beach towels, hats and sun glasses. And of course Tecate and Dos Equis have huge tents with loud music, sexy young girls with a minimum of clothing and cold Beer. Semi trailers have been bringing in Sodas and Beer all week.

Homes which are normally deserted are filled with sounds of happy families.The beaches are totally occupied: families camping in tents, sleeping in trucks,eating in the shade of palapas, and some brave teenagers simply sleeping in the sand. The boom boxes and roaming bands play till the wee hours.

Enterprising recyclers have set up a compound complete with a scale. Men with large sacks gather the empty Aluminum cans and take them to the central compund. An old pickup truck is driven over the cans to crush them for transport to Hermosillo. The 110 km highway from Hermosillo to Kino is bumper to bumper. Army and police checkpoints attempt to control the traffic.

By early Sunday morning all will come to an end. The tents will fold and the tourists will all return to: Sinaloa, Chihuahua, Arizona, and every part of Sonora. The vendors and puestos disappear. Monday morning the Ayuntamiento will do their best to clean up the aftermath. A formidable task . . .

The expats come out of their homes where they have been sequestered for 3 days. Peace and quiet return. All good things must come to an end. 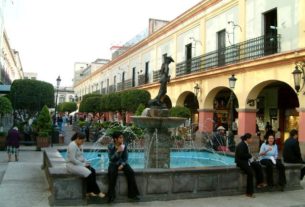 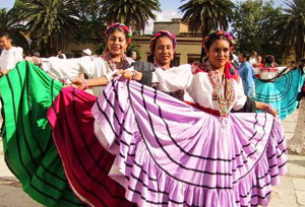