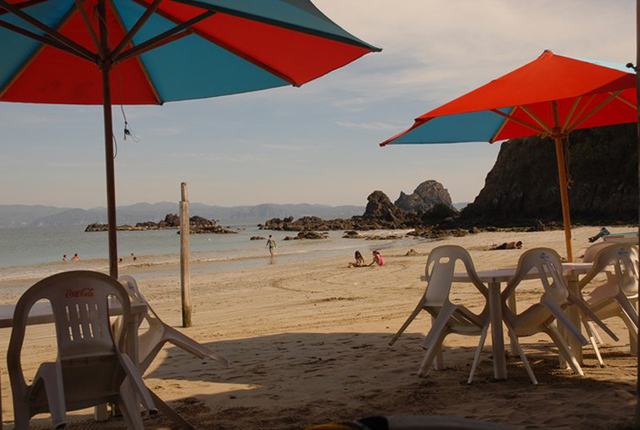 White gold sand, the soft slope of the beach and shallow water gently warmed by the sun make this a perfect playpen for young families. The livin’ is easy. So is swimming. According to the latest census, there are no sharks or spiny sea urchins.

The bay is a safe harbor for sailboats. Snorkelers think they are inside an aquarium. The bay is also a big deal.

La Manzanilla, at one elbow, is a construction zone. Villas are sprouting from the rocks and cactus overlooking the town. What once was a simple fishing village is about to become a vacation mecca. Well, maybe.

Elsewhere, super spenders have seized some of the best hillside miradors and developed expensive all-inclusive resorts with magnificent views. There’s a golf course with ambience and dual traps for hookers and slicers, Pacific Ocean on one side and a jungle on the other. There’s even a show place where you can shed all your clothes.

The beautiful bay is off Mexico highway 200, closer to Manzanillo than Puerto Vallarta. Unless you drop in by helicopter or parachute, just getting there is a trip through a picture book. There are exciting curves, sensational scenery, a banana plantation or two and several coconut groves.

We drove toward the water on Jalisco highway 541, past a few speed bumps and a remarkable little store with the WalMart mentality in the community of El Rebalsito. It was an informal gas station (five and 10-gallon plastic reservoirs with a little hose for gravity delivery). A very large no-smoking sign was prominently displayed. Health care is important in Mexico.

The store was stocked with chips and dips, picks and shovels, tarps and ice cream and rolls of rope. It had several of nearly everything. What a place!

We slowed at first notice of the school zone and came to a complete stop at La Esquela de Tenacatita. The student drum and bugle corps was engaged in morning practice. The bugler was parked under a palm tree, on an upside-down five-gallon bucket. Eight drummers were doing their best to walk and drum at the same time. Nobody asked me but I hope the parade is a few days away.

The tiny village of Tenacatita, so small it is not listed on some maps, offers an assortment of photo ops. Pelicans sometimes park atop outboard motors on the back of small fishing boats. Jagged rocks rise up unexpectedly from the shallows to form a perfect backdrop.

Tenacatita keeps changing between visits. It appears the outside world is becoming more of an influence. There are whispers that government planners (schemers) want to open the area to major development and that locals are fiercely determined to defend their turf. One of the mysterious whispers says the difference of opinion has already cost one life. It wasn’t a local. Of course nobody saw anything. Nobody knows who did what — or if anything really happened.

Tenacatita has more beds than before. In the beginning were campsites. Next came the little cinderblock hotel that is still painted a bright shade of tangerine. Hotel Paraiso rooms cost 200 and 300 pesos. Showers for sailors and beachcombers are 10 pesos. Pay five for a bathroom stop.

Another hotel is up and running. A third looks about ready. It has a pool. Los Amigos Hotel, a yellow two-story, is open for business but the beach is at least 35 feet away. Air conditioners cost 50 pesos extra.

The building in front of the trailer park is now renting three rooms. Progress is all around.

Unless I miscounted, there are now 11 palapa restaurants along the main line. They all serve seafood, breaded and fried, grilled in garlic butter or drizzled with fruit juice. Beware of fish diablo. It is hotter than Hades.

Go for Rollo de Mar, fish filet stuffed with chopped shrimp and octopus, wrapped in bacon and covered with almond cream sauce. Not for dieters.

Fiesta Mexicana offers off-street parking. That means you probably won’t get stuck in the sand. Restaurant Chito features Mrs. Chito standing beside the road, waving you in with a menu. She has at least a grasp of English and a bright sense of humor.

In reaction to my Pittsburgh Steelers cap, she shook her head, pointed to her palapa and said “We’re Number 1.”

Tourists contribute additional charm to this charming place. A giant motor home, the size of a full-grown Greyhound bus, somehow wiggled into a parking place above the beach. The owner was using his secondary wheels, a Toyota that looked like a Jeep, as scaffolding. He was standing on top, reaching up to install a satellite dish high on a wooden pole. The bus generator would provide power for Canadian TV, and to heck with the cost of diesel fuel.

Jacques and Maria somebody, teachers from France, are taking time out in their 40s for extensive travel. They are two years into a three-year sabbatical that started in Buenos Aires and is pointed toward Montreal.

For meals and sleep, Jacques and Maria fit into a small Mercedes camper-van. They have the happy, tanned, weathered look of Wyoming cowboys. They take a lot of walks along the beach.

So, how long will you stay at Tenacatita?

And what do you do at Tenacatita?

“Nothing. That’s the best part.” 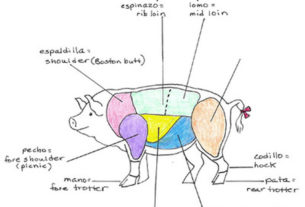