In my experience as a cross-cultural consultant, the issue that seems to most bother non-Mexican businesspeople about their Mexican counterparts is their apparent lack of frankness in dealing with conflict. Depending on how they take it, this apparent difficulty in dealing directly with conflict is interpreted as insincerity or insecurity. This is often apparent when Mexicans avoid words like “no” when asked to do something. Some specialists recommend that instead of asking subordinates questions like, “Can you have this ready by Friday?” managers should ask, “When do you think is it going to be ready?” Similar to Japanese culture, the word “no” sounds a bit aggressive to many Mexicans, since it is refusing to grant a favor or required information.

Show Me the Way

Many foreigners in Mexico know that when they ask street directions, few will admit that they don’t know the answer, preferring to offer their best guess. For many non-Mexicans, this is highly annoying. However, most Mexicans say they have the same experience in asking for directions. But, they can tell the difference between someone who knows and gives you the right directions, and someone who is just giving you “polite answers.” The tone of voice, the vague look, the slight stuttering, and many other non-verbal clues are clear indications to Mexicans that the person really has no idea, and is instead playing out a cultural ritual.

This is a classic case of how insiders and outsiders to a culture interpret the same behavior differently. To Mexicans, who are used to paying a great deal of attention to non-verbal language, the words “I don’t know” are not needed, since that message is transmitted in many other ways. Many non-Mexican Westerners, who are more accustomed to relying on words than on non-verbal communication, are easily fooled precisely because they do not hear the words “I don’t know.”

Most people, regardless of their cultural background, say they prefer a “straight and direct” approach to dealing with conflict. Perhaps it’s all those communication and psychology books that have convinced the world that being direct is so much healthier and better.

Yet, even people who come from cultures that are considered to be very direct, like New Yorkers, Israelis, Argentineans and Spaniards, have a limit to how much directness and frankness they can handle. This reminds me of a former German student who used to complain about the lack of Mexicans’ sincerity, since she preferred people to be direct when they disagreed with her. However, when I asked her if it would be all right for me to tell her at the end of the course that her final paper was complete trash, she found that kind of extreme directness unpleasant.

“It could lower my self-esteem,” is how she explained it.

And I agree: If I have to choose between a style that guarantees I will feel lousy about myself (directness) and one that may “fool” me into thinking I am a decent and reasonably intelligent guy, I’ll be frank and direct with you, I choose the latter. 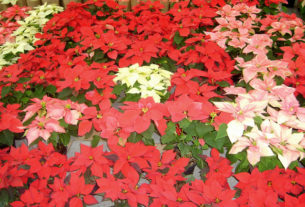 The poinsettia, Mexico’s Christmas gift to the world

Pancho Villa as a German Agent…