After numerous forays into Mexico over the past six decades, I’ve learned a few things about Mexico and Mexicans. Most of our southern neighbors are honest, trustworthy and friendly to a fault. However, do not trust a Mexican amigo when it comes to accurate walking distances. I don’t care if you’ve known the person for years, do not have any confidence when he or she says, “It’s just a few blocks up the street.”

I’m convinced most Mexicans are the hardiest and finest walkers in the world—with the possible exception of a few villagers in the upper regions of the Himalayas. Other than besides the beaches and a few small areas, the country is one of hills and mountains. Most Mexican cities are colonial and perfect for pedestrian, rather than automobile traffic. As far as I can determine, if it’s not “outside the city” it’s a short walk in Mexican culture.

My last three experiences of walking a couple of blocks with a friend were: six, fifteen and thirty-two blocks respectively. I didn’t pack a lunch for the thirty-two-block jaunt. However, the experience solidified the idea of questioning my host a bit more before taking off for a short walk.

My advice to newcomers to Mexico is, take the walk if an amigo wants to go somewhere. But, if you aren’t Olympic-trained, be prepared for a week’s worth of exercise. If it’s uphill, you will quickly discover if it’s too far a walk. I’ve learned to fake twisting my foot to beg off gracefully. If the trek is downhill, it won’t be a problem—as long as you have the cab fare to return. The main thing is to take the walk. More doors will open, and you’ll see more of the culture and everyday life with a native than on your own. Just be certain to find out how far “a couple of blocks” are—to be certain you have the stamina to keep up with your companion.

William B. “Bill” Kaliher has traveled Mexico at every opportunity since 1964 by car, bus, train and motorcycle. He has written for the Mexican Ministry of Tourism. Although known for his Mexican travel articles he’s sold work to over 600 publications including The World & I, The Pragmatist and Down Memory Lane. as well as online magazines such as MexConnect.

His book, Mexico by Motorcycle: An Adventure Story and Guide, has garnered mainly five-star reviews, been covered in several magazines, and recommended by expats who have resided in Mexico for years. Perhaps, the top compliment was by a reviewer who wrote, “This reads like a novel.” 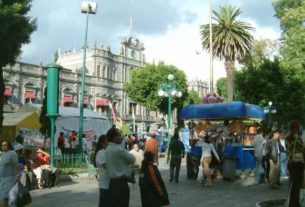 2 thoughts on “Should You Walk with a Friend in Mexico?”