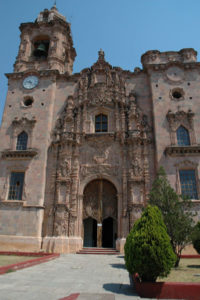 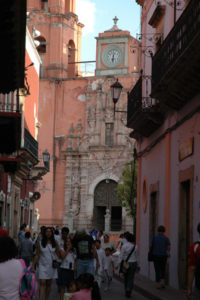 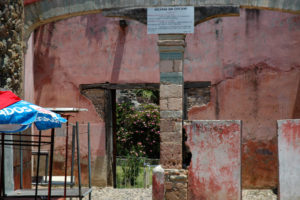 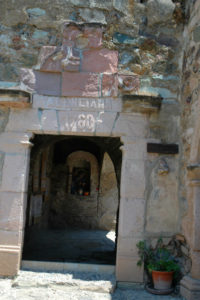 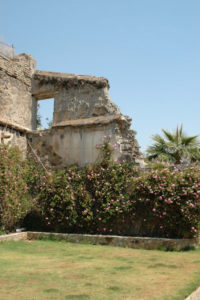 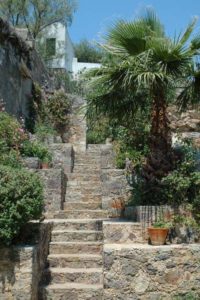 The stairs that take me down hug the curves of the mine as it twists and turns. The walls are coarse with cut stone.

I have followed the narrow Carretera Panoramica (Panoramic Highway) that winds up from the Colonial city of Guanajuato to La Valencia, a charming village that overlooks the broad valley where the city lies. The day is warm and the dirt streets somewhat dusty as I get out of our car and climb the steps to the Temple of La Valenciana, also known as San Cayetano, an imposing 18th century church made of pink stone. It’s facade is intricately carved in the style known as churrigueresque, common here because of the Spanish influence that dates back for centuries. Located near the Valenciana Mine, the church was completed in 1778. Since then, the building, its golden laminated altar and altar pieces, and its magnificent old art works have stood as a reminder of the incredible wealth that the Valenciana Mine and others like it produced.

La Valencia came into being when silver was first discovered in this area back in the mid 1600s. A century later, this area of Mexico produced 70% of all the silver in the world. And even today, though the mines are less productive, silver is still found, making Guanajuato a great place for those who want to buy items fashioned from the gleaming metal.

But the history of the mine offers another look, beyond the magnificence of the basilicas and mansions that were built with the riches it produced. The Spaniards ran the mines and the people of Guanajuato worked in their depths. The life span of those who descended into the heart and heat of the mine to pull out ore was, at the best, ten years from the day they first began their work.

There are tours of the mine but. before I go below, I visit several shops near the church that are filled with high quality art and craft works. Then I wander along a walled cobblestone roadway that lead to the mine. Here are open stands selling jewelry, clay pots and handicrafts. I stop to look and for just a few dollars buy silver earrings and a pretty silver bracelet. The vendors are surprised that I don’t negotiate on the price, but they already seem so reasonable that to me it would be an insult to try to pay less.

The tour of the Valencia Mine starts with a ramble through a series of rooms set in a long low building with wood planked floors. Each of the rooms is given over to the history of the mine. Displays feature old black and white photos of the mine and its owners and workers through the years as well as other artifacts from centuries of mining. In the last room are cases filled with a stunning, display of gleaming silver jewelry, plates, pitchers and other items crafted from the metal that sits deep in the earth beneath us.

I leave the treasures behind and, donning a white helmet, enter the opening of the mine. It’s a long descent, several hundred feet, but not nearly as long as many of the workers took in the centuries before us. The mine shaft here goes down to 545 feet and, though Valencia is still a working mine, I see no mining on that day. I have been in many caves but this is my first visit to a mine. The feeling is the same for me — of being enclosed by a vast amount of heavy rock. And though that can be a daunting thought, there is also a sense of wonder, of being under the earth in caverns carved by the work of men and a chance to view history in a place so remote that many will never get here. The stairs that take me down hug the curves of the mine as it twists and turns. The walls are coarse with cut stone. If the walk seems somewhat precarious, the guide reminds me of what it must be like for those who carried their equipment down with them and the silver back up.

We have lights with us and there are lights on the walls, but still some of the cavern is shadowed by darkness. It would have all been candlelight and oil lamps even one hundred years ago. Now a yellowish glow casts enough illumination that we can see the deeply cut walls though the seemingly endless stairs disappear in the shadows below. I am reassured when I hear that we won’t be descending as far down as the workers go. Indeed, as much as I enjoy hearing the history and experiencing the mine, am glad when it is time to turn and climb back up the steep stairs.

Sunlight is welcome after we reach the surface, entering a small room whose small doorway admits the day. Removing my helmet, I step outside into a grassy courtyard where bright pink and red bougainvillea blossoms spread against the stone and frame a stairway that leads to a higher terrace. It’s a charming spot and a good place to pause end enjoy a soft drink. I think if it feels so good for me after just an hour down below, how it must have felt to the men who toiled here so long ago.

Crossing over: embracing my Mexican life

Bliss, paradise and no tipping