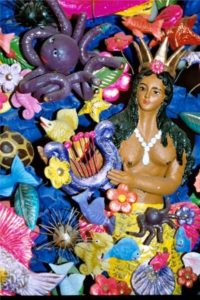 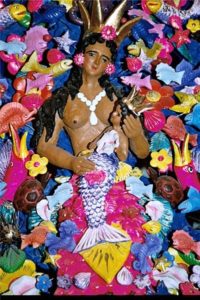 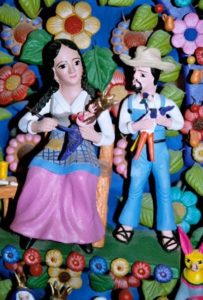 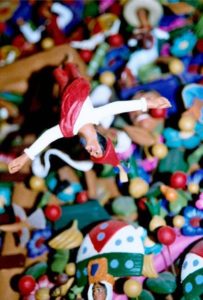 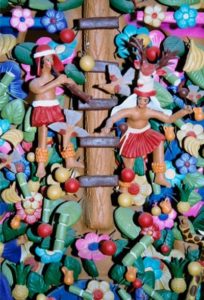 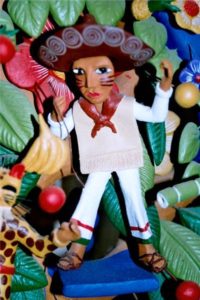 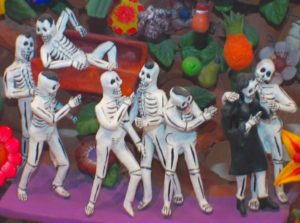 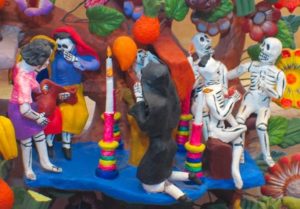 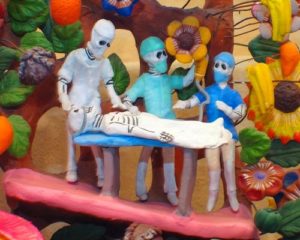 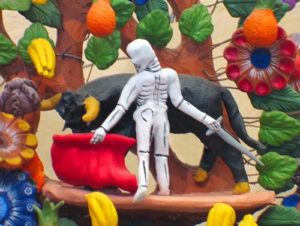 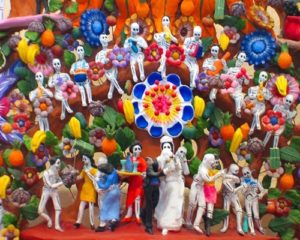 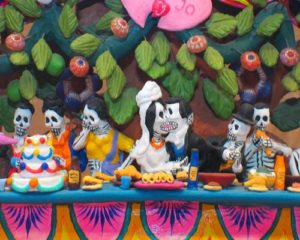 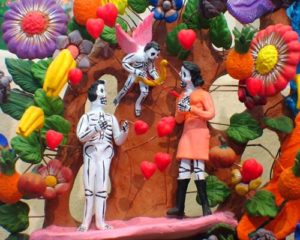 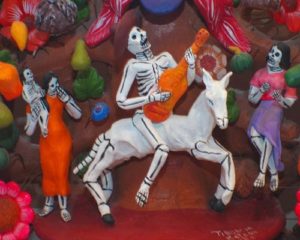 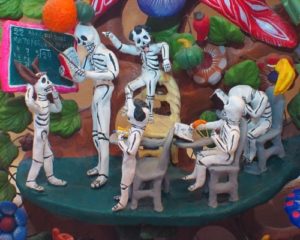 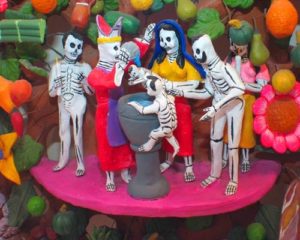 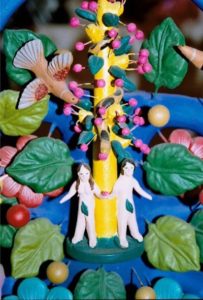 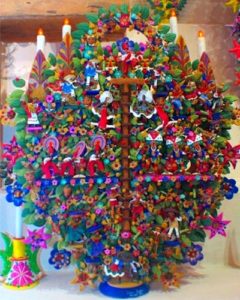 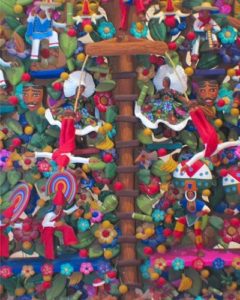 For the Soteno brethren of Metepec in the State of Mexico, creating the sculptures known as árboles de la vida (trees of life) is more than an art form – it is a family tradition.

It all began in the 1930s, when Modesta Fernández – wife of Darío Soteno – began making clay sculptures. According to her grandson Oscar Soteno, Modesta started out with whistles and molded them to look like a variety of animals – horses, lions, rabbits and the like.

“I try to make stories – stories in each one of my trees,” Tiburcio notes. One of his sculptures on display at La Casa del Arte Popular Mexicano in Cancun, for example, traces the life of a skeleton that is ironically named Tiburcio. This sculpture represents “the everyday life that is going on in Mexico – going to school, going to parties, all of that,” the artist explains. In this arbol de la vida, the skeleton Tiburcio is shown in various stages of his life, which include scenes of him getting baptized, goofing off in class, getting married, acting like a ladies’ man, becoming a bullfighter, dying in the hospital, and then popping out of his casket when he realizes that a friend is flirting with his widow. After his life has ended, Tiburcio is shown being judged in the afterlife and is depicted as a man instead of a skeleton in this final scene.

Tiburcio is always open to exploring new themes, as many of his pieces are commissioned by clients who have specific ideas in mind. When he receives a specialized order, Tiburcio thoroughly researches the topic before he begins sculpting the arbol de la vida. When it came to his interpretation of Mexican author Laura Esquivel’s novel Como Agua Para Chocolate, for example, he read the entire 256-page book on which the sculpture is based. “I had to really study that book in order to make a tree measuring 60 to 70 centimeters,” Tiburcio notes.

The duration of time it takes the artist to complete an arbol de la vida varies, then, according to the amount of research involved. Size and complexity of the sculpture are also factors, as Tiburcio explains.

“I can make a tree in one day – not a very complicated tree, but a good quality one,” he says. Other times, the artist can take up to two months of 15-hour workdays to create one of his sculptures.

And the measurements of each arbol de la vida vary according to what the client orders. “We make all different sizes,” Tiburcio comments, explaining that his sculptures measure from as small as 20 centimeters to as large as a meter or more.

Tiburcio’s árboles de la vida are comprised of relatively few materials, including clay, water, and the tule flower that is also known as plumilla. The sculptures are fired in either a gas or a wood-burning kiln and painted with anilines, acrylics or at times, enamel.

“We try to be a complete workshop,” Tiburcio notes. “People come and they order something, and one of the virtues of this workshop is that we say yes to everything.”

The workshop has long been a family operation, as Tiburcio’s wife Amelia helped him back when their three sons were young. Now that the children have grown up, they sculpt alongside their father. “All three of them have a lot of ability,” Tiburcio says of his sons.

The youngest, 19-year-old Saul, currently molds flowers, leaves and other decorative details that adorn the árboles de la vida. He will soon begin working on more complicated sections of the sculptures, as Tiburcio notes. “We are training him to start sculpting bodies, hands, faces and all of that.”

The oldest, 27-year-old Carlos, “is doing excellent work,” according to Tiburcio, who explains that his son is creating diverse árboles de la vida that range from mermaid-themed pieces to sculptures that recount the history of Zapata.

And Israel, at 23 years old, “also has a special gift,” notes Tiburcio, recounting that he and his middle son were recently honored for an arbol de la vida that they entered into a contest together. “We won a prize and they held us up as an example because we are following the tradition of a father teaching his sons,” Tiburcio says.

Tiburcio himself started sculpting when he was only six years old, following the lead of his older brothers and sisters. “We were 12 siblings – of which two died and the other 10 of us dedicated ourselves completely to pottery,” notes 53-year-old Tiburcio.

And now, the tradition has been passed on to a third generation, including Tiburcio’s nephew Oscar Soteno. Oscar is the son of Alfonso Soteno, who is one of Tiburcio’s older brothers.

“My father taught me,” comments 34-year-old Oscar, who said that he began sculpting as a young boy, just like his uncle. “From childhood, I started playing with the clay, with the paints,” Oscar notes. “And then, in 1988, I began dedicating myself full-time to árboles de la vida.”

Oscar and his wife Maria work together in a family-run workshop. “I make the trees and she is in charge of painting them and decorating them,” Oscar explains. “(And) I have three other family members that work with us.”

The árboles de la vida that Oscar and his family produce in their workshop usually measure one meter high and 85 centimeters wide. However, the artists do produce much smaller or larger pieces, depending on what a client wants.

And just like in Tiburcio’s workshop, Oscar and his team use clay, plumilla and water as the materials for their árboles de la vida. They mainly paint with acrylics, but do use anilines upon request.

Oscar, like Tiburcio, has branched out from the traditional type of árboles de la vida. “Each of us has our own style,” Oscar comments about the trees that he, his father, his uncle and other Soteno relatives sculpt.

One of Oscar’s distinctive pieces is an arbol de la vida dedicated to Mexican dance that is on display at La Casa del Arte Popular Mexicano. “I presented the most important dances of Mexico (in this tree),” Oscar says. The piece is comprised of more than 20 different figures captured in various dance poses. The representations depict everything from el jarabe tapatio (Mexican hat dance) to the dance of the voladores de Papantla (Papantla flyers).

Another of Oscar’s unique trees is one that he created in honor of his grandmother Modesta, who died in 1987. The focal point of the prizewinning sculpture is a figure that represents Modesta, sitting in a chair and painting a tiny mermaid figurine. A man is standing alongside her, holding a miniature animal sculpture. The rest of the tree is filled with scaled-down versions of typical Mexican handicrafts, such as a nativity scene, animal whistles and an arbol de la vida scene of Adam and Eve with the serpent. This homage to Modesta “represents everything that she started off making,” Oscar notes. “In the beginning, she made mostly whistles and piggy banks… the tree represents all of the designs that she made in those years.”

The artistic tradition that Modesta began in the 1930s lives on seven decades later, as many of her children and grandchildren are still sculpting árboles de la vida. The Soteno artists have garnered acclaim both at home and abroad, as their sculptures are part of museum collections in Mexico, the United States, Canada, Europe and South Africa.

On 12 different occasions, Tiburcio has been invited abroad as a representative of the Mexican art world. And on five of those trips, Carlos was selected to accompany him. “We give exhibits and we give lectures,” Tiburcio says. This upcoming year, Tiburcio and his sons Carlos and Israel will travel to Spain, where they will sculpt a six-meter arbol de la vida featuring the story of Moctezuma and Hernán Cortés.

Despite their national and worldwide fame, the Soteno family remains close to their roots, as they have all chosen to keep living in Metepec, where Modesta created her first arbol de la vida.

Oscar hopes that his nine-year-old daughter and three-year-old son will someday follow the same artistic path that Modesta carved out for her family. “It would be my biggest dream that they would carry on with the tradition.”

Tiburcio echoes this sentiment, saying that he hopes the Soteno legacy is passed down to his grandchildren and great-grandchildren. “One of the ideas that I have always had is that my work will continue on (through them).” 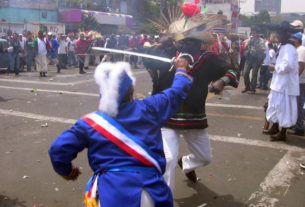