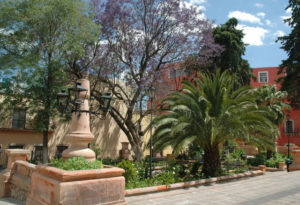 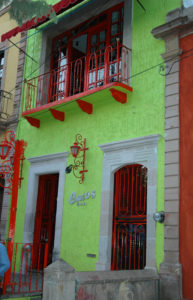 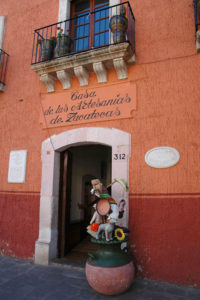 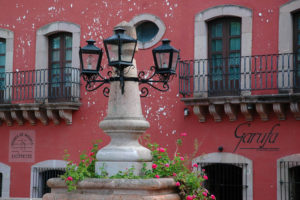 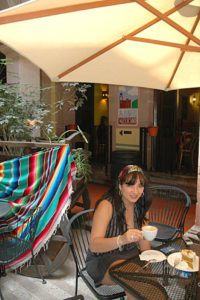 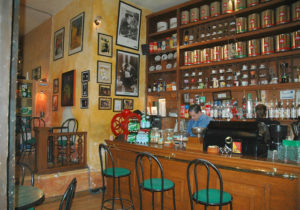 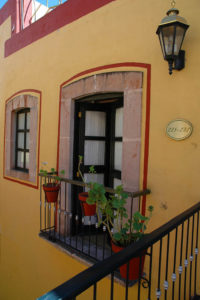 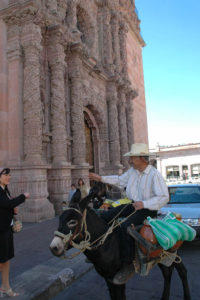 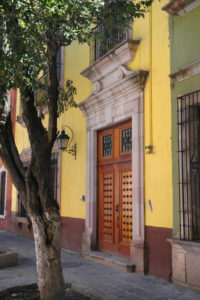 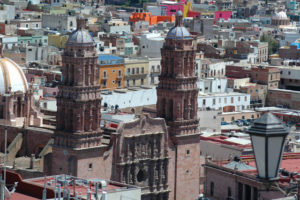 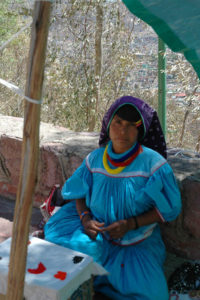 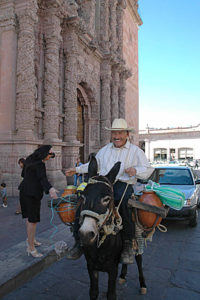 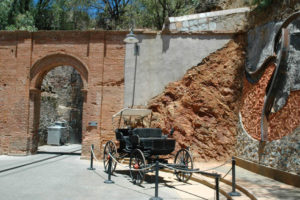 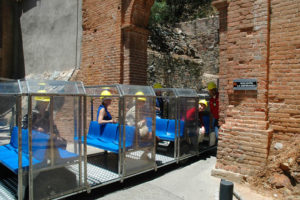 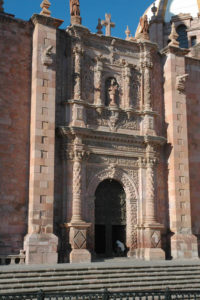 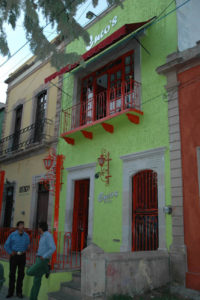 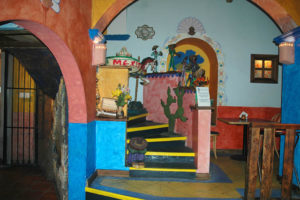 We follow a meandering street that twists and turns like the best of any Medieval European city. But that, in a way, is what Zacatecas is.

A soft dusk has settled over the cobblestone streets of Zacatecas and we can hear the sounds of the fountain in the small garden across from our hotel and smell the sweet Mexican tuberose that only blossoms at night. Petals from the purple jacarandas drift down, covering the sidewalk. It is a lush, full night and the garden entices one to linger.

But there is so much to do that, after just a glimpse of the fountain, we hurry over to the Alameda Jardin where the tamborazos zacatecanos are beginning to play. These strolling musicians – similar to those who perform in the callejoneadas in Guanajuato, another colonial city tucked away in the highlands of Mexico – meet at dusk in the plaza. Then, as the crowd assembles, they begin to wander through calles (streets) and callejones (alleyways) almost like Pied Pipers except we know we can return willingly if we want to.

The difference between the callejoneadas and the tamborazos zacatecanos, my friend Liliana tells me, is not one of geography but the types of instruments. In the callejoneadas, musicians play strings, such as guitars, whereas the music of the tamborazos consists of winds and percussion sounds. (Tambor is Spanish for drum.) It is said that the tamborazos had their origin in miners who would meet after emerging from the mine and make music on their makeshift instruments. Although the mines that made this area rich are gone, the tradition of the music – and the mescal that many drink while following the musicians – remains.

Following the tamborazos zacatecanos is more than just the chance of enjoying the festive feel of wandering Zacatecas on a sweet spring night. Since we arrived here several days ago, Liliana and I have been on a different mission. Each evening we leave the wonderful Meson de Jobito, with its ochre and yellow stucco walls, courtyards and winding walkways, to walk the streets of downtown Zacatecas in search for the ultimate in street food.

Liliana, who is from Puerto Vallarta but now lives in Chicago, speaks flawless English and Spanish (and passable Mandarin but that is a different story), has talked to all the meson’s personnel in search of the best sweet tamales, semita (bread) and taquerías.

Even though most of the stores are closed, Zacatecas is filled with people and energy. The outdoor cafes are busy, people crowd the plazas and vendors line the streets. In a plaza off of Avenida Hidalgo, the main street in the historic downtown, clowns perform for free, itinerant merchants sell balloons and candies, and children run and play. In the background, cars make up a parade with teenage girls dressed in their finery riding on the hoods. Each evening that we’ve walked past this plaza, there’s been activity. One night, a concert and on another, stalls had been erected selling trinkets and food.

But Liliana is particular and we bypass these stalls to find the places on her list. She tells me that, as young girls, she and her sisters would buy semita to dip into cups of chocolate caliente (hot chocolate) before going to bed.

So we follow a meandering street that twists and turns like the best of any Medieval European city. But that, in a way, is what Zacatecas is. A colonial city in the highlands on the slope of Cerro de la Bufa, Zacatecas was founded in 1546 and for centuries was rich with the affluence of the silver that sits beneath its surface. The riches underground translated to magnificence above. The Spanish called the shots during this period of affluence and, during that time, the Catholic Church built 12,000 churches and cathedrals throughout the country. Today, Mexico has more Spanish colonial era monuments, museums, architecture and art than any other place in the world, including Spain. You can see it everywhere in Zacatecas, a UNESCO World Heritage Site – in the elaborate wrought iron filigree baloneys, the Churrigueresque style façade of the ultra elaborate pink cantera stone Cathedral with its two peak towers and in the Plaza de Armas, just across the street, a private residence built in 1727 that is now a public building.

In the daytime, we had crossed the wide plaza to view the multi-dimensional mural painted by Antonio Pintor Rodriguez. We were accompanied on that trip by Arturo Villanueva, a professional guide working on his doctorate in Mexican history. Villanueva seems to know an immense amount about everything, including intricate details of this two story, three wall mural depicting the history of Zacatecas State.

We had also shopped at Gonzalez Ortega Market across the street from the Cathedral, looking at shoes, linens, jewelry, antiques and even saddles in this wonderful arcade of stores. Zacatecas has a lot of ranches in the rural area and saddle shops are common in the capital. Our journey also took us to the Guichito Candy Store where I stocked up on cocadas jerezanas (candies made of coconut and milk), pulparindo (tamarind paste candies), dulce de guayaba (guava candy) and as peanut marzipan.

We had also clambered aboard Teleférico, the Swiss-made gondola that rises some 500 feet to Cerro de La Bufa, which is the highest point of land around here. Below us, as we glance down on our climb, we see the city skyline, the towers of the cathedrals, vividly colored houses in Crayola colors of pink, green, orange, yellow and blue, and patches of emerald green gardens centered around elaborate fountains. La Bufa, we are told, is the mountain where Pancho Villa lead a Mexican Revolution battle known as the Seizure of Zacatecas or La Toma de Zacatecas.

At the top of La Bufa, the road is lined with women and their children, all garbed in the brightly colored traditional clothes of the Huichol, an indigenous group of people with their own customs and language. Known among themselves as Wixáritari, which means “people,” the Huichol are famed for their embroidery, yarnwork and painstaking beadwork. Estimates indicate that there are about 26,000 Wixáritari in Mexico, and many of them live around the city of Zacatecas.

Their jewelry, so intricate and beautiful, poses a dilemma – what to buy? The women are patient while I chose bracelets, earrings and necklaces to take home. The prices? Absurdly cheap.

Then we continue on to the museum, which is dedicated to La Toma de Zacatecas, as well as the Capilla del Patrocinio, a small church, several gift shops and what is advertised as the longest zip line in Mexico. Our group was divided into two, those who thought making the ascent by cable car to La Bufa was adventure enough and those, like Liliana, who immediately allowed themselves to be strapped in and took off, traveling by zip line so far into the distant landscape that they were only specks.

We also traveled to Mina El Eden, a now defunct silver mine that contributed to the riches of Zacatecas for centuries. A tram took us down into the mine’s depths where there’s a wonderful disco, the only one like it in the world. Below ground is also a fabulous museum filled with minerals and ores, and a walking path through the tunnels with views into the canyons and craters created by the miners. Displays, such as a man and a young boy climbing a perilous-looking ladder ladened down with baskets, showed how dangerous the job was. In the background, the constant tapping of picks against the hard rock can be heard. Once above the surface again, we stop at one of several gift shops selling mine memorabilia along with jewelry, pottery and tee shirts.

The lust for silver is part of the area’s complicated and often bloody history and, after visiting the Zacatecas Silver Market on the outskirts of the city, it’s easy to see how the beautiful metal stirred the senses. The market, which I had expected to be open stalls, is instead a gallery of shops where artisans make their jewelry in full view and glass cases filled with exquisite pieces make it hard to make up one’s mind. I finally select necklaces of intricate silver and wonderful silver hoop earrings at Arte y Plata. The prices are so amazingly affordable that I pick up several extra necklaces to take home to friends.

But in the evenings we are less interested in art, architecture even jewelry, and care much more about food. Zacatecas boasts wonderful restaurants and we’ve eaten in many including El Mural at the Santa Rita Hotel, and La Cuija, where we tasted one of the traditional dishes of Zacatecas. Often served at weddings, asado de boda is made with pork simmered in a rich dark mole sauce. Liliana and I have become friends, in part because of our love of Mexico, and we decide to leave our group back at the meson, believing that one way of really experiencing a culture is through food.

We talk to several women (or really Liliana does since, I speak very little Spanish) about their tamales before Liliana finally tells me I can hand over my ten pesos in exchange for one made with coconut and pineapple. Then we stop in a panadería, or bakery. Picking up a plastic cafeteria tray and tongs (that’s how they do it here), we move from case to case, choosing pastries. But the semita Liliana wants and remembers isn’t up to snuff here and so after paying, we’re back out on the streets, taking more twists and turns. Finally, in front of a small taqueria where meats and vegetables are sizzling on two huge comales, she sees the semita we want. The cost? Five pesos, about fifty cents for a large bun, big enough for both of us to share.

We return to the Meson de Jobito with our haul and enter El Mesonero, the fine dining room with its white tablecloths and pianist playing tunes on the grand piano. We order chocolate caliente, which takes ten minutes to make – no powder added to milk here. It is served in large brown clay cups with flowers painted in bands around the center. Dipping my half of the semita into the lush creamy brown beverage, I take a taste.

Our street odyssey has taken an hour as we wandered this centuries-old city. I know it is a journey I will repeat every night I spend in Zacatecas, and will long for once I return home. 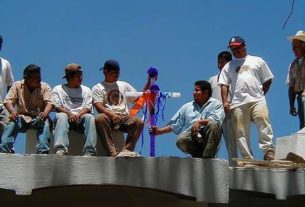 The Day Of The Holy Cross – May 3rd