Ever since the discovery of “lost” cities in the jungles and rain forests of Middle America, theories about the origins of Mesoamerican civilizations have proliferated at a great rate and there is no end in sight. Books, articles, Internet postings about the supposed origins of the Olmecs, the Maya, the Aztecs and others have turned into a profitable business for some and a source of confusion for others. What sense can we make of it all?

First let us define our terms. “Middle America” is a geographical-geological term that includes some nine major cultural areas, such as Western Mexico, the Basin of Mexico, Oaxaca, the Maya Lowlands and Highlands. This is the general area occupied by the modern nation states of Mexico, Guatemala, Honduras, El Salvador, and by Belize. “Mesoamerica” is a cultural term defined in a 1943 article by Kirchoff that describes the area characterized by a common cultural basis and common traditions. Geographically, it extends from central Mexico to central Honduras and western Costa Rica, more specifically from the Soto La Marina River in Tamaulipas and the Fuerte River in Sinaloa southward. Some 50 cultural traits were listed, although this classification has its limitations. Among these features are the ritual flying game, certain forms of self-sacrifice, ball courts with rings, and hieroglyphic writing, to name only a few. This now includes western Mexico, which for a long time was regarded as outside the Mesoamerican sphere of influence.

Comparisons between the Old and the New Worlds were inevitable from the beginning of European contact with the indigenous peoples of Middle America. Bernal Diaz del Castillo, chronicler of the Spanish invasion of Mexico, described in glowing terms the wonders of Tenochtitlan. The Aztec capital was even compared with the European Venice, as if the Aztecs were incapable of such civilized achievements on their own. The Spaniards were much less impressed with the remnants of Classic Maya civilization. But even here the architecture and the monuments were attributed to the Egyptians, the Israelites, the Chaldeans – anyone but the Maya. The search for the origins of Mesoamerican civilizations was on.

For historical reasons, more attention tends to be focused on the Aztecs and the Maya than on other equally important indigenous peoples of Middle America. Classic Maya civilization came to an end centuries before the arrival of the Spaniards, but the Maya left splendid architectural and monumental reminders of their past glory. In spite of the almost total destruction of the Maya hieroglyphic codices by the fanatical Spaniards, recent advances in the decipherment of the Maya script have opened up new chapters in the history of the Maya. Aztec civilization was brought to an abrupt and violent end by the Spanish Conquest. But shortly after the destruction of Mexico-Tenochtitlan, the Franciscan Sahagun and other religious and secular chroniclers and historians recorded Classical Nahuatl, as well as many Aztec traditions and ceremonies. Although the basic purpose of the religious writers was to destroy all vestige of the native culture, they preserved much of it in spite of themselves. Consequently, we have much more actual documentary evidence for the Aztecs and the Maya than for most other cultural groups in Middle America.

The history of Mesoamerican research is filled with colourful characters endowed with vivid imaginations. The early explorers were not trained archaeologists and so perhaps may be excused for their unbridled enthusiasm and wild speculations. The late 19th century writer Augustus Le Plongeon convinced himself that the ancient Maya had not only sprung fully developed from the Lost Continent of Atlantis but that they then carried the Maya culture back to the Mediterranean area. Another early explorer, Count Frederick Waldeck, saw pre-Columbian elephants everywhere in ancient Maya ruins. He therefore concluded that the Maya must have known about elephants from their ancestors, who, of course, must have come by ship from Africa or Asia with prior knowledge of elephants. Waldeck was so adept at discovering elephants that he sketched them where no one else can see anything resembling an elephant. On his theory, the trunk-like stone nose of the rain god, Chac, on the facade of the famous Codz-Pop or Palace of Masks at Kabah, Yucatan, was transformed into an elephant’s trunk. Likewise, some recent “alternative” historians see a man of “Asian” features and the heads of two elephants with turbaned mahouts leaning on them on Stela B, a stone monument at Copan, Honduras, dated to A.D. 731. In this field of enquiry, the human imagination knows no limits.

The elephant theory illustrates what happens when fact and fancy begin to cross lines. There is nothing inherently impossible in the idea of pre-Columbian trans-oceanic voyages. However, before engaging in unfounded speculation, we should at least look at the available evidence first.

The remains of two imperial mammoths, along with the flint and obsidian weapons used to kill and butcher them, were found at Santa Isabel Iztapan in the Basin of Mexico, close to the then swampy shoreline of Lake Texcoco. These finds are currently dated to around 7700 to 7300 B.C. There is thus no doubt that early man in Mexico had knowledge of mammoths. But while revisionist historians may acknowledge the existence of mammoths and mammoth hunters in Middle America, they go far beyond the evidence when they assert that the Maya must have used models and depictions of elephants which they brought with them from Africa or Asia. While it is conceivable that the Maya may have retained some kind of tribal memory of mammoth hunting in more ancient times, it does not follow that any of their immediate ancestors crossed the ocean carrying with them knowledge of African or Asian elephants. This is typical of the fallacious arguments used by pseudo-historians and pseudo-archaeologists to “prove” their origin theories.

According to the orthodox academic view, small bands of hunters and gatherers crossed over the Bering Straits via a bridge between the Asian and North American continents during the Wisconsin Ice Age, which ended some 10,000 years ago. However, precise dates cannot be given and estimates differ wildly. This widely accepted theory too has its limitations, sometimes raising more questions than it answers. But at the moment, this explanation has more to recommend it than wild speculations and unsubstantiated theories about lost continents and superior lost civilizations or visitors from outer space. Consequently there is sharp disagreement between professional archaeologists and certain popular writers about the early movements of peoples and the origins of civilizations in the Americas. Alternative or revisionist historians quickly dismiss what they regard as “traditional” or hard-line academic views on the grounds that professional scholars have a vested interest in hiding the “truth” from the deluded public.

Books by Erich von Daniken, Graham Hancock, Robert Temple, Zecharia Sitchen and other popular writers on the origins of civilizations and the human race sell millions of copies. Meanwhile, meticulously researched academic studies on the same topics languish in research libraries, unread except by other specialists and completely unknown to the general public. Best-selling writers on Mesoamerican subjects capitalize on this fact. Who wants to plough through a dull tome on the ceramic sequence from Uaxactun when you can read how extraterrestrials used the cenote at Chichen Itza as a launch pad for their space ships? Personally, I would be fascinated if an abandoned space ship were to be found on some mountain top in Peru, but, until it is, I prefer to try to make some sense out of the evidence at hand.

To support their theories of pre-Columbian trans-oceanic voyages, revisionist historians sometimes point out that not all the skeletal remains of the earliest human inhabitants of the Americas are of the strictly Mongoloid type. This is taken as evidence that different racial types from many different parts of the world reached the Americas centuries before Columbus. Of course it also challenges the Bering Straits theory. This is, of course, an important line of research involving geology, paleontology, physical anthropology, and other research areas. However, we are here concerned primarily with the origins of the major civilizations of Middle America.

Mesoamerican research has taken two main directions: diffusionism and independent inventionism. As a legitimate anthropological term, “diffusionism” refers to the study of the origins of cultural characteristics and their spread from one society to another. The extreme version holds that all cultures originated from one main centre of high culture. A more reasonable view is that there was more than one major cultural centre or place of origin, but that cross-cultural influences took place over time. Independent inventionism, on the other hand, is the view that the culture or civilization in question, such as that of the Classic Maya, developed more or less independently from any major outside influence. Any external influence that did occur would have had minimal effect on the development of the culture in question.

“Hyper-diffusionism” is an extreme form of diffusionist theory. This is the approach generally adopted by what we may call pseudo-archaeologists or pseudo-historians, researchers and writers whose theories of the origins of Mesoamerican civilizations are based on little more than mere speculation and dubious manipulation of the available evidence. Unfortunately for the general public, many of these hyper-diffusionists or alternative historians are not only very persuasive writers but they also give the impression of having carefully researched the subject. However on closer examination, most of their theories fall apart under their own weight or simply lack any concrete evidence to support them.

In Part Two we shall look at some specific diffusionist theories of the origins of Mesoamerican civilizations and the writers who hold these unorthodox views. 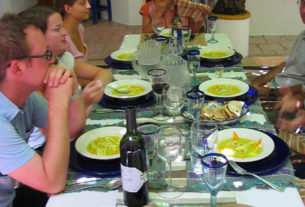 Sterilization of Indians in Mexico

The Power and the Glory by Graham Greene