A friend in Puebla recently arrived at a party with a handful of pamphlets on a symposium dedicated to the topic of aphrodisiac foods. While this largely conservative central Mexican city is not the first place one would imagine such a conference being held, it turns out that this event has taken place for a few years running. Coincidentally, an invitation to the presentation of a book on the subject in Mexico City just arrived.

All of this inspired an investigation of so-called “aphrodisiac foods” and revealed that many of those listed as such are Mexican natives. In fact, the two heading most lists, chile and chocolate, are probably the foods most commonly associated with Mexico, theoretically making mole poblano the most aphrodisiac dish imaginable, if one believes that some foods do indeed have libidinous effects.

While the U.S. Food and Drug Administration maintains that these results are based on folklore, rather than scientific fact, it is going against more than 5,000 years of tradition in several cultures throughout the world, beginning with the ancient Greeks, who named these substances after their goddess of love and beauty, Aphrodite. Aphrodisiacs are defined as “substances claiming to increase libido” and fall into two groups.

Psycophysiological aphrodisiacs are those which are not taken internally, but rely on other senses such as visual, tactile and olfactory. An example of this is vanilla, whose scent, rather than any food value, is cited as an aphrodisiac and said to be the most popular mood-lifting aroma.

The second category includes food and drinks. (It also covers medicines, whether homeopathic or pharmaceutical.) It is in this category that foods native to Mexico make a prominent appearance.

The Aztecs, Maya and other Mesoamerican people, like most ancient cultures, considered procreation an important moral and religious obligation, and recognized the connection between nutrition and fertility. Food was harder to obtain than it is now, and great importance was placed on the nutritional value of certain foods as affecting the ability to reproduce.

However, not all of the credence placed in the aphrodisiac qualities of particular foods was based on nutrition. Resemblance to genitalia, especially in certain fruits, was sometimes thought to indicate a connection between that food and human fertility. A good example of this is the Aztec view of avocados, discussed below.

Whether or not some foods can function as aphrodisiacs, the fact remains that the most powerful stimulus of all is the mind, and if people believe a food to work in a certain way, the hope for a positive response might very well lead to that response. Even if there is no scientific basis in the libidinous qualities attributed to the following foods, most of them are pleasing to the sense of taste, sight, smell, or all three. Who can argue the appeal of the smooth, creamy texture of avocado, the heady scent of vanilla, the golden gleam of honey or the rich taste of chocolate?

The following list of foods are some Mexican menu suggestions for Valentine’s Day or any occasion calling for the leisurely enjoyment of a good meal.

avocado (aguacate) Persea americana: The Aztecs called it ahuacatl, meaning “testicle tree,” because of what they perceived as its resemblance to that part of the male anatomy. It does contain significant amounts of fiber, potassium, riboflavin and vitamins C, B6 and E, necessary for hormone production, as well as the antioxidant lutein. The delicious taste and smooth, sensual texture can’t hurt, either. William Dampier, a nineteenth century English adventurer, said of the avocado, “It is reported that this Fruit provokes to Lust, and therefore is said to be much esteemed by the Spaniards.”

chile (chile) Capsicum annuum: Chile, in its many sizes and shapes, is perhaps the quintessential Mexican cooking ingredient. It has possibly been associated with the libido because of the “rush” of heat it often produces. Chile is used in suggestive references in Mexican song and slang, as in the classic “La Llorona”- “I am like the green chile, hot but tasty.” Bawdy references aside, chiles provide quantities of vitamins A and C, as well as increasing the metabolism by as much as twenty five percent after the ingestion of a chile-laced meal.

chocolate (chocolate) Theobroma cacao: The most popular of all Valentine’s gifts, chocolate was so highly prized for its flavor and invigorating effects that cacao beans were used as money, and even counterfeited, during the days of the Aztec empire. The tale is told that the Emperor Moctezuma drank fifty golden goblets of chocolate a day to enhance his libido and assure the continuance of his line. A complex food source, chocolate contains theobromine, a substance related to caffeine, which explains the energy boost it provides, as well as phenylethylamine and seratonin, mood-lifting agents. These last two have been found to have a stronger effect on women than on men. Perhaps Casanova, who ate chocolate before attempting any of his many conquests, should have shared some with the ladies.

damiana (damiana) Turnera diffusa: This herb, native to Mexico’s Baja peninsula, is used to make a tea widely believed in Mexico to be an aphrodisiac. It does have mild tranquilizing properties, and perhaps a relaxed feeling is the basis for this otherwise improvable assertion. It is used to make Damiana brand liqueur, which not-too-subtly promotes its claims by being sold in a bottle shaped like a pregnant woman. Be careful though, because too much has quite the opposite effect. As the porter in Macbeth said of alcohol, it “provokes the desire but takes away the performance.”

honey (miel de abaja) Mel mellis: The basis for claiming honey to be an aphrodisiac probably has root in the misplaced belief in the libidinous effects of alcohol, since the Mayans made their ritual alcoholic beverage, balché, from honey. Today a delicious liqueur made from the honey of Mayan stingless bees is sold under the brand name Xtabentun, produced in the Yucatan. While it does not claim to have aphrodisiac effects, it does make a very good after-dinner drink and would make an exotic finale to any Mexican dinner.

oysters (ostiones) Ostreatus angasi: High in protein, oysters also contain large quantities of zinc, essential to the flow of oxygen through the bloodstream, essential to male reproductive ability. Because of their nutritional value, oysters were a high-status source of nourishment for Maya noblemen, who exerted political pressure on each other by controlling the distribution of oysters and other seafood.

passion fruit (maracuya) Passiflora edulis This is undoubtedly an example of the physical characteristics of a food being associated with fertility. Seeds have been universally taken to symbolize fertility, and the passion fruit is literally filled with them, as well as with a large quantity of juice rich in vitamins A and C. In Oaxaca, passion fruit pulp is mixed with mescal to make a cocktail characteristic of the region. While the aphrodisiac characteristics of this drink are uncertain, it does add to the conviviality of social occasions.

pineapple (piña) Ananas conosus: The taste, scent, and sweet juiciness of the pineapple have long been noted as being particularly appealing to the senses. The sixteenth century Spaniard Fernandez de Oviedo, instrumental in promoting Mexico’s pineapples in the Spanish court, said that they “appealed to every sense but that of hearing.” High in vitamin C, pineapple has frequently been used as a homeopathic treatment for impotence.

tomato (tomate, jitomate) Physalis, solanum lycopersicon: Although native to México, and an important part of the diet since pre-Hispanic times, the tomato was promoted as an aphrodisiac not by the Mexicans but by the French, who called it the “love apple.” Perhaps its former exotic status as being a food from the New World contributed to this perception, and it may be because of this that some claim that the forbidden fruit in the Garden of Eden was not the apple at all, but the tomato.

vanilla (vainilla) Vanilla planifolia: The heady aroma of vanilla is said to increase desire, and whether or not this is true, its lovely scent is definitely a mood enhancer. Mexico’s Totonac people, whose region is the original home of vanilla, tell a folk tale in which Xanat, the youngest daughter of a fertility goddess, fell in love with a Totonac youth. Since she was a goddess and he a human, they were unable to marry, and to express her eternal love, she transformed herself into the first vanilla plant, whose aroma would always provide him with pleasure. Scent and flavor aside, the story itself inspires romance.

Following are some suggestions for food to serve on Valentine’s Day, which in Mexico is also known as El Día de Amor y Amistad — The Day of Love and Friendship. Whether the aforementioned foods are truly aphrodisiac or not, the act of preparing food for someone is in itself an expression of affection. 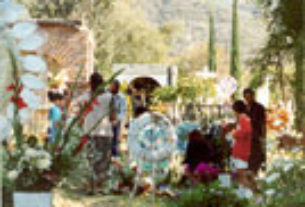 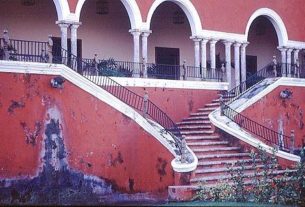