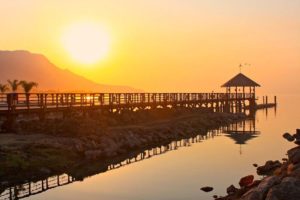 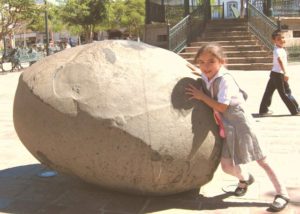 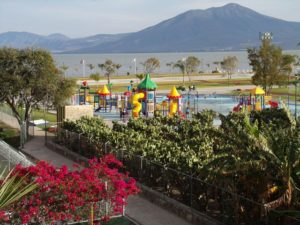 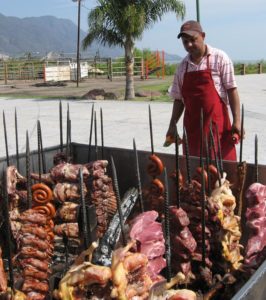 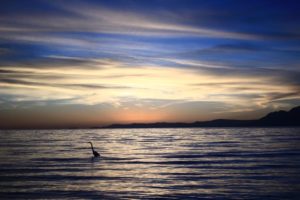 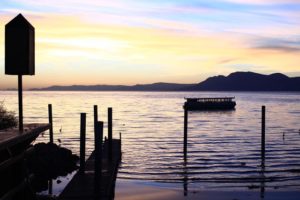 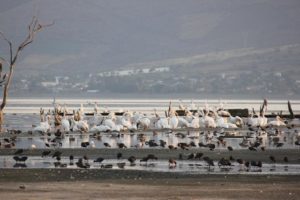 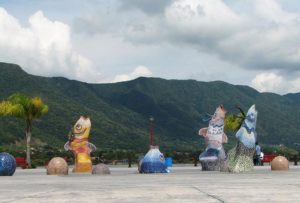 Okay, maybe not in the way Christopher Columbus did his thing. It appears several somebodies previously found Jocotepec — or maybe it was never lost. But it has been mostly ignored or taken for granted far beyond politeness.

A plaque in the plaza says Jocotepec has been at the west end of Lake Chapala, in what became the interesting state of Jalisco, for the last several centuries. Parked on the plaza is a boulder, estimated to weigh 6845 pounds, that looks like a souvenir from the stone age. Children call it the pushover rock.

Jocotepec is 35 or 40 miles from somewhat-better-known Guadalajara, 730 miles from the Texas border, a three-hour drive on toll roads from Pacific beaches.

Being that explorer from the first paragraph, I must admit we have wintered a few hundred yards from Jocotepec, in the bedroom community of Nestipac, for 14 years. We sometimes went into town for shopping or dinner at China Inn. Good chicken and broccoli, good sauce, very good.

Once a year we went to pay our tax bills, property and car, plus a fee for water. Costs keep creeping up but the total remains minimal.

Once we went to the street market. We almost went again but couldn’t find a place to park.

Once we went for rich ice cream. We have so far not tried the highly recommended birria goat stew.

Once we paid a distasteful bribe to be excused for turning the wrong way onto a one-way street. We didn’t pay much. The directional arrow was covered by tree limbs, which was probably why the policeman was where he was.

Back in the old days, we drove through Jocotepec rather regularly to visit Tom and Manuela Sandilands, out near Highway 15. They sold excellent pizza and salads and he, a world-class provocateur, gave away the most cantankerous conversation in the county.

Alas, Tom is dearly departed and so is the famous painter in oils and watercolors, Georg Rauch. Fortunately, other intriguing people are doing their best to fill the void.

The economy is alive. This is a natural agricultural zone. Berry farms that sell to Driscoll and Dole are flourishing. There is no need for unemployment compensation.

I get the impression Jocotepec has a new and more appealing outlook. It may even be moving up in the world. It is a friendly, genuine Mexican village, not plastic or pretentious, quite unlike the gringo subdivisions not too far away.

The cost of living is a nickel less and, believe it or not, visitors can arrange free guided tours without being indebted to a realtor. This is hospitality!

Jocotepec has a new leader and ambassador, Juan Francisco Cuevas O’Shea, el presidente, mayor of the municipality, a personable, positive-thinker who envisions a brighter future.

Juan O’Shea likes his job. On inauguration day, even when he found the coffers below zero, he could see better days. He pledged to improve health care. Federally funded hospital construction is underway. He plans other improvements. In fact, a new, scenic slate-surface walkway with sturdy benches and new trees is developing in our community.

The modern malecon gets better and better. There are surprising art objects to analyze, appreciate and photograph, copies of Toltec heads and what may be an Aztec god.

There is talk of finally running a water line to the water park. Children love the playground. Teens flock to the skateboard ramp. Dozens of families go for Sunday strolls. There are permanent shops and portable food stands. Entertainment comes and goes. Do not miss the exercise dance class.

There are other sites and sights to see. You must arrive early to watch fishermen come in with their catch. There are soccer matches at different levels. The culture center is very interesting. At Los Dos bed and breakfast are several Georg Rauch paintings and his studio, preserved and shown by appointment by Phyllis Rauch.

There is a surprising cluster of fish restaurants not far away, near San Juan Cosala. Piedra Barrenada was first, more than 50 years ago. Some illustrious names are on the guest lists.

On Privada Gonzalez Ortega is the unique Special Education and Development Center. It started in 1979 as the school for the deaf. Two Canadians, Roma Jonas and Jackie Hartley, recognized the need. The Canadian government contributed to the growth. The state of Jalisco embraced the idea.

Solutions? In most cases, money.

Jocotepec has never been a tourist target. When Lake Chapala lucked into international publicity for having the second-best weather in the world, the town of Chapala had the correct name. Cost of living was encouraging, especially to those just getting by on Social Security.

Jocotepec, on out the road when the lakeside road was built, was just there, a long-ago wagon stop along the trail between Mexico City and Guadalajara.

The 15,207 residents seemed very happy being who they were. They were faithful to traditions. They now and then shot a neighbor who misbehaved but generally met each others’ needs. Farming and fishing were the primary industries. A few herded sheep and used wool for distinctive weaving. A few manufactured tile. Two guys made saddles, harnesses, sandals and belts.

The big church remains a landmark. It overlooks the plaza. It has roots to the 16th century. The current sanctuary is probably 220 years old. A focal point is a legendary wood carving of Jesus on the cross.

Tony Burton, in his book, Western Mexico, A Traveller’s Treasury, says there were once two wood sculptures and more than one story. One version credits a local Indian with the discovery of a guaje tree all aglow. He and a fishermen friend did the woodwork.

Another version, supported by church historians, is that a young girl saw flames coming from a guaje tree — on the south side of the lake. The tree was obviously sacred. She did not do the carving.

Aida Aguilar Perez, in her book, Photo History of Jocotepec, raises an eyebrow but reports that the statue in the church was credited with an assist in the remarkable termination of the cholera epidemic of 1833. Others say it also helped stop an influenza attack and assisted with many personal miracles.

The other statue was supposedly lost. Surely nobody would steal Jesus.

The church and the carving are attractors for religious tourism. Many who have moved away return for a few days of festivities each January. The final Sunday evening is the main event, a procession by the devout, some crawling in repentance.

In English, that’s The Lord of the Mountain.

If religion can bring back the natives and bring in visitors, so could entertainment events, craft fairs, cultural presentations. There is a bull-fighting ring with a no-kill policy. Fights are really tail-grabbing shows, far more fun than blood. Bands make loud music.

El presidente has a committee thinking of things that might bring in other visitors. Former New Yorker Fred Habacht, another positive-thinker, has persuaded Plymouth, California to become a sister city. There will soon be an exchange program.

Mexico is known for large families. Fred may find other sister cities, maybe from Canada, maybe Europe. He is also helping shape a promotional video and even a city slogan — something like “Jocotepec is more than you can imagine.”

City manager Gonzalo Flores Amezcua is in the loop. He is planning to erect historical markers with explanations in Spanish and English.

“Jocotepec is an attractive town, filled with good people,” said O’Shea. “We have our fair share of the lake and the mountains. We have a rich history. We think when visitors come to Lake Chapala for any reason, they should see Jocotepec. They might be pleasantly surprised.”

Yes indeed, Juan Francisco O’Shea Cuevas says it in English. His father was a subway conductor in New York, a direct descendant of Irish immigrants who fled the potato famine. The man came to see Mexico and found a bride.

After his father’s untimely death, young Juan and the family lived in California for a while, in part for elementary schooling.

“Jocotepec is home. That’s where the heart has always been.”

Nine years ago, O’Shea wanted to be county mayor. He lost that election by 80 votes, perhaps because he was labeled a gringo. Instead of complaining, he just went to work on the future, opened some small businesses, became a berry farmer and kept saying “buenas dias” to everybody he met on the streets.

Last year, Juan won by more than 3000 votes. It is possible the people believed his vision for a better Jocotepec. It is possible he got a boost when the national political pendulum swung.

Could be many appreciated his smile. They may have recognized leadership ability. Maybe they just liked him or the fact that his wife, Lillian Olmedo, would help in his administration — without pay.

Jocotepec is renewed, improved, very interesting. Sorry I was so slow discovering it. You know how we explorers are. We sometimes start far away and work our way home.

Nine steps to a happy life in Mexico

Charitable foundations in Mexico and elsewhere