Semana Santa — Holy Week — is the observance of a solemn religious occasion. But the mood in most of Mexico during Easter time is far from solemn. With the exception of the Good Friday reenactments — passion plays and processions that take place on some level in even the smallest village — the atmosphere is festive, with people taking to the streets and beaches, released from the winter confines of the house, ready to celebrate spring and rebirth.

Spanish rule was overthrown nearly two centuries ago, but the Spanish liturgical calendar was kept and its important holidays were given a decidedly Mexican interpretation. As they have since the days of the Aztec empire, fiestas provide a venue for decorations, processions and, not least, popular food and drink. In the weeks before Christmas, neighbors exchange tamales and punch at the parties known as posadas. At Día de los Muertos — All Souls — traditional food is prepared and shared with the living and the dead, and children of all ages enjoy the sugar skulls and sweet breads associated with this holiday.

Semana Santa also has a strong culinary tradition, one that partakes of the popular food of the streets in a season when everyone seems to be outdoors.

Historian Jeffrey Pilcher cites a description of Semana Santa from the 1800’s era memoirs of Guillermo Prieto. “From Holy Thursday to Easter Sunday throngs of people danced through the streets, in a movable feast of popular cuisine. Thirsty revelers guzzled aguas frescas, refreshing waters flavored with pineapple, melon, tamarindo, and chia seeds, dispensed by women from palm-frond and flower-decorated stands. Holy Week also marked the traditional start of Mexico City’s ice cream season, these frozen treats made with ice carried down from the slopes of Popocatépetl.”

Ice cream-making now relies on refrigeration technology rather than the volcano, but remains an important element of the seasonal street food. Pushcarts, loaded with tubs of ice cream and the fresh fruit ice bars called paletas, wheel their way through the streets. Raspadores — the vendors of the snow cone-like shaved ices known as raspados — are parked in front of schools on weekdays during the hot spring season. During Semana Santa, vendors of ice cream and raspados push their way through the crowds gathered in the plazas in front of churches, calling out their distinctive nasal cry of “nieveeees nieveeees,” “snows” or frozen treats.

My first impression, many years ago, of the scene in front of a Mexican church during Holy Week was a bit of culture shock. Recalling the somber, silent and often gloomy mood of churches in the north at this time of year, I walked from our house in Cholula to the colonial convent of San Gabriel, site of the town’s major religious events. The sound of a thousand matracas, the wooden noisemakers carried by people of all ages during Semana Santa, heralded the carnival-like scene before me. Startled though I was, practicality took over as I made my way to one of the beautifully decorated aguas frescas booths for some relief from the heat. Refreshing drinks made from jamaica, horchata, melon and other seasonal fruits were ladled out from large, clear glass containers. The booths themselves were adorned with flowers, palm fronds, paper cutouts and fresh fruit. Other booths, also decorated, sold the small, donut-like cookies called roscas and the nut bars known as muéganos.

Also at this time, our neighborhood had a local fiesta in honor of Nuestra Señora de Dolores, Our Lady of Sorrows, whose feast day is the Friday before Good Friday. Some people say that on the meatless Fridays of the Lenten season chicken is proscribed along with “red meat”; others say chicken is acceptable. Either way, our street fiesta had something for everyone. Delicious pambazos, Central Mexican filled rolls bathed in a spicy salsa, came with a choice of chicken or cheese filling. Plátanos, fried plantains topped with sweetened cream, and the ever-present mini “hot cakes” topped with marmalade satisfied the sweet tooth of anyone who hadn’t had enough roscas and muéganos.

When we moved to Oaxaca, the local street food changed somewhat, but the seasonal sweets and aguas still dominate the Semana Santa street food scene. Huge booths are set up around the zócalo, stacked with dulces regionales, candies made from coconut, tamarind and other regional ingredients. One particularly charming seasonal custom here is the Día de la Samaritana, the fourth Friday in Lent, when schools, churches, stores and businesses all dispense aguas frescas to passersby, in commemoration of the biblical “woman at the well,” from booths decorated as wells, complete with flower-bedecked arches. The celebration of popular cuisine, that street food so dear to our hearts, is one of the most appealing aspects of Semana Santa in Mexico. You can capture the holiday spirit, or just celebrate springtime, with some of the following recipes. Additional recipes for fruit aguas may be found in Aguas Frescas: Fresh Fruit Drinks. 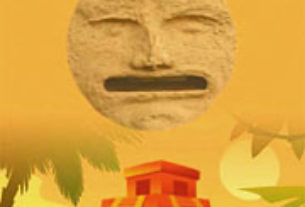