Plaza Garibaldi, 2 a.m., and the mean streets are bopping.

Beers flowing. Flowing friends. Tequilas, too. Maybe a few too many.

What the hell. You’ll get a taxi …

You are a writer and this is a first-person narrative. Maybe you’ll be able to sell the piece. Because you were shot after you boarded that taxi, when you became the victim of an assault and tried to fight off the attackers. It happened, to a journalist named Jan Reid in 1998.

There are other stories. Those of the attackers themselves. What circumstances propelled their destinies to collide so nightmarishly with your own? Who are these people? New York-based writer David Lida has filtered his own robbery experience through this prism in “Taxi,” which appears in the newly-published short fiction collection Travel Advisory: Stories of Mexico (William Morrow, 2000). To say the least, it’s a different approach. The reader almost sympathizes with the bandits — although not much. Rather, the story suggests the implacability of Fate. And who can fight Fate?

Following the 1994 peso devaluation, poverty in Mexico City rose in direct proportion to the currency’s plunge, which is to say it shot up like a kite in a wild convection of disturbed air. A wave of street crime followed. For locals, expats and tourists alike, there was nary a soul who didn’t have his or her own harrowing tale of assault to narrate, or knew someone that did.

Taxi robberies emerged as a common tale of woe. Hailed off the street, the passenger boarded the vehicle only to be kidnapped a short time later, as a pair of the “driver’s” accomplices crowded in with knives and guns to terrorize the victim — either robbing the person outright or journeying from ATM to ATM throughout the city, withdrawing his/her money. The latter modus operandi could last for hours, finally ending with an unceremonious shove onto the dusty ground of an obscure shanty suburb, dead center of nowhere. This is what happened to Lida, when he lived in Mexico City, working as a freelance correspondent for such U.S. publications as Harper’s Bazaar and Vogue. Unlike Reid, who did publish his unfortunate first-person piece “Left for Dead” in last October 1999’s GQ magazine, Lida was not shot. He wisely did not resist the assault. The scars left by the attack were psychological rather than physical, but scars are scars.

“I’d been coming to Mexico since ’83, lived here in the early ’90s, and then in 1995 — boom — I’m the victim of this crime that everybody is talking about,” Lida says. “It was a terrifying experience and I felt not only robbed of the money but of my feeling of safety in Mexico. (Yet) when I wrote the story the voice that was most compelling was the taxi driver (cum-bandit). I think the most valuable thing a writer can do is get into the heads of the person the reader doesn’t know. It wouldn’t be as interesting if I wrote it from the P.O.V. of the victim.”

Lida continues: “It occured to me: what are these guys thinking? How do they justify making a living robbing and hurting other people? Now, I don’t think they go around twirling their mustaches going ‘ha, ha, ha.’ So I did my best to get inside what it would be like for someone to justify that decision.”

Indeed, Lida’s oeuvre is to “get inside” the heads of a number of characters who populate distinctly Mexican worlds, in stories such as “The Recruiting Officer,” “Regrets,” “Free Trade,” “Acapulco Gold” and “Bewitched.” They include a burnt-out CIA operative, a skeptical reporter, a gay rock video producer — male and female, American and Mexican, ranging the socio-economic gambit from the maids and streetkids of Mexico City, to well-heeled foreign tourists at resorts in Baja and Cancun.

While the stories may be richly entertaining, often funny, and always insightful, readers should be warned that they’re in for a pretty grim ride. As the writer has previously noted, “if something really rotten doesn’t happen in a short story, I want my money back.” Lida’s own literary influences — Edgar Allen Poe, Paul Bowles, John Cheever — along with his family background, attest to the flipside of life’s coin, in which every silver lining has a cloud.

“I don’t set out intentionally to write stories where something bad happens, but they seem to come to their logical conclusion that way,” Lida says. “I also have a rather dark view about life. My mother was a Holocaust survivor but a broken woman. My brother died of AIDs. So I get here to Mexico City and I’m in heaven because all around there’s crime, poverty, injustice and inequality. Having said that, I love the place and I hope the point of view of the Mexican characters shows that I see the bad things that happen here but recognize that we’re all human.”

Several stories in “Travel Advisory” have been previously published in Zoetrope All Story, Open City and Literary Review. The book itself has received glowing praise from several prestigious sources: Kirkus Reviews (“a depth of vision rarely found even in most novels today”); Publisher’s Weekly (“gritty and unforgiving … a convincing, unvarnished portrait”); and Paper Magazine (“… flows freely from devastating satire to equally insightful compassion.”) Barnes & Noble have also selected Lida for their “Discover Great New Writers” program.

Lida entered the world of letters via a route common to many scribes: disparate experience, and lots of it. Foregoing university for a life of adventure, he drifted from the Big Apple to New Orleans and over several years scored work as a busboy, bellhop — even a brass-polisher on the Mississippi Queen. He was also a shipping clerk and proofreader, before turning to freelance journalism. Lida went on to file stories from Madrid, Paris and London and Madrid for Interview, the Village Voice and Elle. But it is evident that Lida really got his fiction writer’s legs through living in the Mexican capital, where he also met his future wife, Yehudit.

“This is the country I feel most at home in, sometimes it feels more like home here than in the United States,” Lida says. “I come from a very disorderly and chaotic family and so I think I just felt right at home when I got here. Most cities that I really like are very difficult places, and the truth is, the world is not a fair place. I love Mexico City but we cannot pretend that a lot of really rotten things don’t go on here.” 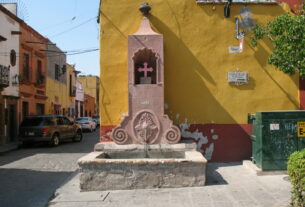