Please pardon me. I have neglected Mexico City. It has been years since I have told you how much I love it.

Don’t laugh. For much of our time in Mexico, the really big city has meant life-threatening smog, bumper to bumper deadlocks and keep your hand on your wallet. Careful on the metro and never, ever flag down a taxi for fear of getting kidnapped.

It is much improved but it remains too big, too hectic, too liberal, too much of several things. I will say Mexico City is alive, as in vibrant, colorful, musical, congested, confusing — really confusing to this old country boy from rural East Tennessee. Some folks from Utah don’t get it, either. Most from Jocotepec never go near.

Mexico City is the only place on Earth that would close the big trash dump without a functional replacement. Unbelievable. But it is moving on up. It even has parking meters in Polanco.

What a place! Street vendors offer bootleg DVDs before Los Angeles can get them wrapped and shipped to market. There are clever knockoffs of many famous brands. Low risk. Slick profits. Other observations:

Mexico’s newest generated colorful conversation. It was conceived to connect then with now. It was going to be ready on Sept. 15, 2010 as part of the bicentennial celebration. Alas and alas, it was more than a year late reaching Paseo de la Reforma. The president dedicated it a day earlier than announced to avoid the ridicule of protesters.

Government says the cost, with a few overruns, was $77 million. Mexicans, taught to be suspicious of the establishment, caught a whiff of corruption. So, it is 341 feet tall, made of steel and quartz, weighs 1700 tons. It can’t have cost that much. Think what that expenditure could have done for education.

My favorite political friend says I am missing major progress, that I can leave my gas mask at home, that air pollution has been reduced by half. Several people now ride bicycles. A few drive experimental electric cars. Twenty-two million others don’t.

He also says I am unreasonably conservative, that more and better gay rights, financial encouragement for single mothers and free Viagra are the world wave of the future. He flinched when I asked about abortion and euthanasia.

I have never tried to do a list of Mexico City highlights but there are stately cathedrals, marvelous museums and magic marketplaces. There is incredible architecture in the Centro Historico. You really should see Parque Mexico in the spring, when jacarandas are in bloom.

Be bold. Go to a wrestling match and cheer for the good guys. And have a dish of roasted peanuts. If you like pomp and ceremony and patriotism, check out flag ceremonies in the Zocalo, up at 8, down at 6. Some older people will put hand over heart. Beautiful.

Statues and plazas, great as they are, fade into ordinary when compared with mind-boggling protests about anything, presidential elections, bus fare, food prices, corn subsidies, even the rights of prostitutes. Nobody does protests better than Mexico City.

Thousands marched in July opposition of vote-buying, a time-honored tradition. Can you imagine nude bicyclists in an anti-car protest? The flesh peddlers came and went. Nude farmers complaining about NAFTA were another matter. Tractors are so slow to go.

There is so much to do and see and buy. Stop, look and listen and be careful crossing streets. The city is a kaleidoscope of action, sounds and smells, a mass of humanity, tall buildings, great restaurants, music on street corners, belching buses back to back to back and taxis going zip, zip, zoom. The subway system moves four million or more commoners per day.

Some time ago I gave up on the thought of successful navigation. My GPS just can’t handle it. There are 632 Juarez Streets. Hidalgo Street is less common. Only 624. This is the truth: There is a squiggly, dead-end street named Hidalgo in a Hidalgo neighborhood, a few blocks from a municipal borough called Miguel Hidalgo. The trick is finding it.

Get a guide. That way, when you get lost, you’ll have company at taco time. Social scientists tried to convince me that Zurich is the world’s most livable locale. They said Mexico City is dead last, rock bottom, in environmental neatness. Sorry about that.

There is promotional talk of solutions. I keep wanting to believe it. I suppose there are encouraging signs. Some days you can see the mountains.

But don’t trust my judgment. We just don’t stay long enough. I do hear that for a wild and crazy place, it can be several degrees of fun. We enjoy walking tours, a few blocks at a time. We do not fear the volcano. We do not fear bird flu. We visit with the hope that the threat of other dangers is also exaggerated.

Wimps are scared of their shadows. Adventurers live and learn and leave. I’ve been told that tourists with just a hint of common sense generally enjoy Mexico City. Lots of people don’t get mugged. Many walk around unmolested. Some venture out at night and make it back. A few dine and dance and don’t even get short-changed.

My Mexico City theory is to play defense without becoming a coward. Be alert. Pay attention. Do your exercises and quickness drills. There may be times in a crowd when it becomes necessary to fracture the sticky fingers of a pickpocket.

Having said all that, I must admit the city is one intriguing monster. There is a great divide in pesos. Some of the richest and poorest live there. Contradictions? There is awful slum poverty but four artificial beaches for those who can’t afford ocean outings.

Until now, I have resisted making smart remarks about the rock school. Can you imagine civilized government spending public funds helping create a new crop of rock stars? Four years of instruction in how to write lyrics that don’t make sense and sing and play noise? It’s all in the name of artistic freedom and show biz.

No need for me to tell you that Mexico City is the financial and cultural center of the country. Strange mix — so much beauty, so much dirt. Then and now are many years apart and yet, in places, they are side by side. Segments of Chapultepec Park are said to be as they were centuries ago. Fascinating.

It has been said that off in the distance, there is a faint ring-ring-ringing. It may not be the ice cream salesman. It might be alarm bells. Fair warning. 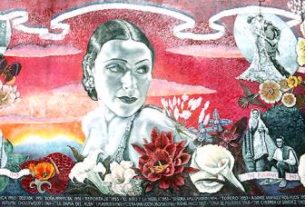