7 A.M. The sky is something of a steel gray, like before the sun comes up or on dark cloudy days before a storm. It hasn’t rained for about four months so we can probably rule that out. The roosters are crowing from various places in Colonia San Juan. Pretty soon they will be herding sheep, and maybe a few milk cows, through the streets to pasture. Most everyone is still sleeping. It’s Easter vacation time in Mexico.

Tlaxco is a small town in an agrarian area with small farms. It is about 1 ½ hours north of the city of Puebla and maybe 2 ½ hours northeast of Mexico City. There are a few small clothing factories and maybe a half-dozen saw mills, none of which are very noticeable to outsiders. The land which is covered by the town was once part of one or more haciendas. The Posada Merchant, a hotel on the Plaza, is one of the remaining hacienda buildings. The main structure has adobe walls which are two feet thick with high open-beam ceilings and old, worn wooden doors. It has a lovely courtyard with colorful bouganvilla, roses, etc.

Tlaxco is at an elevation of around 8,000 ft. above sea level. It is part of Mexico’s Central High Plains. It lies at the foot of mountains covered with pine. Often, in the early morning I watch the clouds pushing over the mountains, and with the first light of day, they are beautiful.

Tlaxcala is the smallest state in Mexico. It is, by comparison, one of the more politically quiet and economically stable states of Mexico. It has a lot of tourist traffic, consisting of people from Puebla and Mexico City passing through Tlaxcala to their vacation homes and other places where tourists go. However, about a year ago, it was one of the few stops President Clinton made on his visit to Mexico. Historically, Tlaxcala played an important role in the invasion of Mexico, as an ally to Cortez and an old, unconquered foe, of the Aztec empire.

There are thousands of small towns or villages all over Mexico that are a delight to an adventurer or someone who is interested in nature, antiquities, history, archaeology, or the diversity in culture and traditions. Not far from here in a lovely, semi-tropical, mountainous region, are two villages in close proximity. In one village, Totonaca is the dominant language, and in the other, Nahuatl, the language of the Aztec. In addition to the differences in language, dress and traditions, there is the Spanish influence, and of course influences from the rest of the world, such as a curious American or foreign coffee buyers. 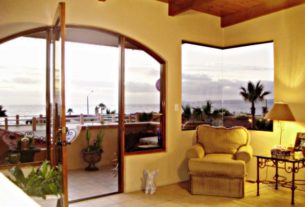