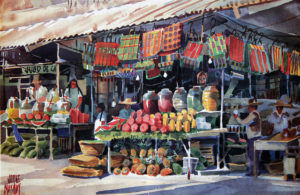 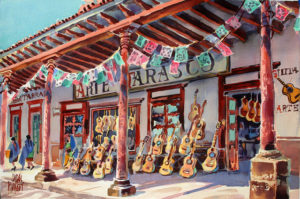 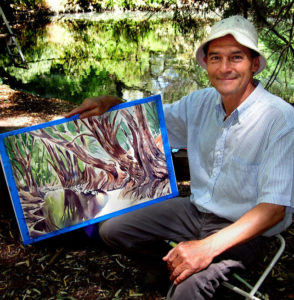 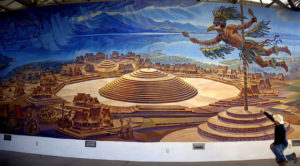 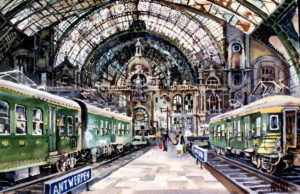 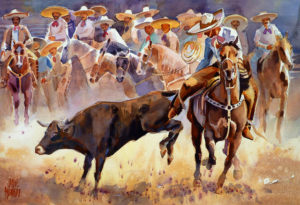 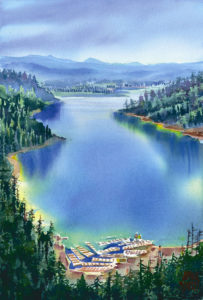 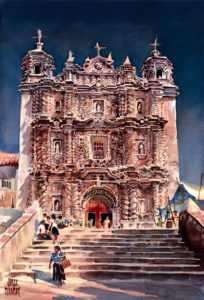 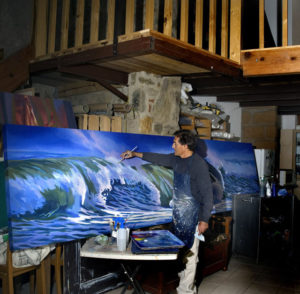 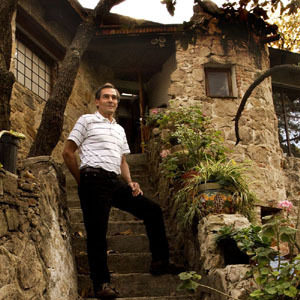 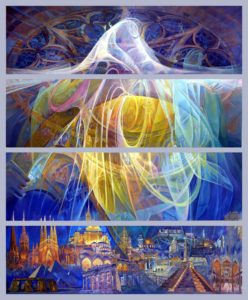 “In the paintings of Jorge Monroy we see the hand of a master, the expression of an artist, a cultivated talent forged by the hammers of study, constancy, dedication and creative energy.” Godofredo Olivares

Jorge Monroy’s art is well known in Mexico because his charming watercolors have appeared every week in the newspaper El Informador for more than thirty years. Fewer people are aware that Monroy is also an excellent muralist and a master of acrylic painting.

Monroy was born in Morelia, Michoacán in 1951. “As a child,” he says, “I couldn’t resist drawing everything I could see, from sunflowers to Superman.” As a result, he eventually entered the Escuela de Artes Plásticas at the Universidad de Guadalajara. “I became a painter,” he continued, “and I knew I would probably die of starvation, so I also became a vegetarian, studied yoga and prepared myself for a life of austerity.”

However, instead of expiring in a garret, Monroy managed to keep himself alive by painting watercolors and was even able to marry and raise a family. He has also succeeded in traveling abroad for months on end and always returns to Guadalajara — where he now resides — with a portfolio full of acuarelas.

“In all these years,” he says, “I’ve never suffered an artistic crisis — my enthusiasm has never diminished. Whatever I see, I want to paint. That’s my problem.”

Like most watercolorists of his generation, Monroy studied under master painter Alfonso de Lara Gallardo at the University of Guadalajara’s School of Fine Arts. Specializing in watercolor techniques, he chose Mexican and European landscapes and buildings as his favorite subjects. His first exhibition took place in Guadalajara in 1972. Since then, he has traveled far and wide throughout Mexico, Europe, Australia and the United States.

Although Jorge Monroy’s principal production has been watercolors of landscapes or buildings, he has also worked with acrylics, assisting a number of muralists in the city’s Escuela Vocacional. In 1999, he worked with Alfonso de Lara Gallardo on Guadalajara’s largest mural, “Historia de la Salvación,” a 640-square-meter painting which now adorns the walls of El Templo de San Bernardo.

Under the Wings of Mercury

In February, 2009, Monroy completed his first mural bearing his own signature for the foyer of the Guadalajara Chamber of Commerce. The painting is entitled “Bajo las Alas de Mercurio” (Under the Wings of Mercury) and was commissioned for the120th anniversary of the Chamber of Commerce and the 467th anniversary of the founding of the city of Guadalajara. It covers 50 square meters and is painted in acrylics on three panels made of metal and concrete. Unlike some murals, which make use of abstract forms or clashing colors, this one “needs no explanation” according to Monroy, and invites the visitor’s eye to “take a leisurely walk through the streets of Guadalajara.”

The painting is framed on the left by Mercury, the god of trade, and on the right by the statue of Minerva, who was, among many other things, the goddess of commerce. The façades of Guadalajara’s cathedral and Degollado Theatre take center stage, to which the viewer’s eye is led by subtle lighting. From here the eye can wander into old colonial buildings, down quiet side streets or to a hospital or hotel in the heart of the modern city. What is particularly pleasing is that one scene smoothly blends into the next, with no abrupt or jarring change.

The universal appeal of the mural will be obvious to anyone who observes the behavior of people walking into the Chamber of Commerce building. Most stop for a quick look at the painting and end up mesmerized by it, accepting, without a second thought, Monroy’s offer to take the viewer on a virtual paseo (walk) through the city.

When asked, in 2009, whether he would consider doing another mural, Jorge Monroy replied, “I thoroughly enjoyed this project. It took me out of my studio in Pinar de la Venta and brought me into contact with all the people who go in and out of the Chamber of Commerce. I actually went to the foyer with a pair of earphones, figuring I would listen to music while I painted, but I never used them once, during all the months I was working on the mural. Instead, I was constantly interacting with passersby who stopped to watch me paint. And those people influenced the way I painted. Somehow, all of them are in this mural and that’s something that doesn’t happen when I paint alone in my studio. Would I like to do another mural? The answer is yes, and if you come upon a wall that needs a picture, just let me know.”

Approximately one year later, someone did approach Monroy with a blank wall in need of a mural: a long, curving wall inside the newly completed, beautifully designed, Interactive Museum at the foot of the sprawling Teuchitlán archeological site. The people in need of a painting were archeologists Phil Weigand and Rodrigo Esparza, who had been working for years to unearth the secrets of a 2000-year-old civilization whose “pyramids” — entirely based on complex circular designs — can be found all over western Mexico. The museum is located 40 kilometers west of Guadalajara, among the verdant hills around Tequila Volcano.

Because of Jorge Monroy’s mastery of light, the mural immediately grabs the attention of a visitor to the museum, who may easily gasp in astonishment as he or she is immediately drawn into the mural which graces the museum’s 30 meter-long curved inner wall. After a step or two, a large mysterious figure on the far left grabs the visitor’s eye and one instinctively begins to walk in that direction, now engaged in a journey into the past, into the world of the Teuchitlán Nation 2000 years ago.

The mural covers 125 square meters of wall space and is painted in acrylics. Monroy pointed out that this work is mainly based on imagination. Since documentation, especially graphic documentation, of life in Teuchitlán 2000 years ago is scarce, “This was an exercise by trial and error, with the final decision often in the hands of the archeologists. Creating it called upon every talent I could muster.” As an example of this process, Monroy pointed to the image of the Bird Man, flying high above the circular pyramids. “The feathers are authentic in the sense that they come from birds found here in the past, but we don’t know how these were attached to the Bird Man’s body. However, in burials here, archeologists found individuals wearing great numbers of bracelets, each with a small hole in it. We decided to use these to hold the feathers.”

The Teuchitlán mural turned out to be a nine-month project for Monroy, who merely comments, “For me, the time flew by. It was a marvelous experience.” Monroy’s assistants in this mammoth project were painters Ilse Hable, Cristina Partida and Luis Eduardo Gonzalez.

Jorge Monroy’s next and most recent mural is much smaller than its predecessor and is on display in an unlikely site: a funeral home.

“Finding an appropriate theme for the lobby of a funeral home sent me on a long journey of soul searching,” he says. “I knew that people of all faiths would be walking in the door, probably grief-stricken and possibly depressed. And so, I wanted to find a theme that crosses the boundaries of all religions and might offer a ray of hope to every member of mankind. I began by thinking about the world’s temples, churches, mosques and synagogues and how all of them lead us to gaze upward and it seemed to me one symbol uniting all members of the human race is the symbol of light, the beauty of light shining in the darkness, the light from which we all came and to which we will all return. And then I happened to come across a marvelous photo of an ordinary match being lit, where the camera had captured all the subtle shades of color and the shapes of swirling gases which spring into existence when fire is born. So, you may see something of this in my mural, and perhaps a lot more.”

Using the talents so well displayed in the mural he painted for the Chamber of Commerce, Monroy has filled the bottom fourth of his new work with representations of 18 different monuments which human beings have created over the millennia to encourage people to lift their eyes to the light. You will recognize Stonehenge, the pyramids of Egypt and Chichén Itza, the Cathedral of Chartres, Hagia Sophia in Istanbul, the Grand Mosque of Mecca, the Dome of the Rock in Jerusalem, Mont Saint-Michel in France and many others, each of them subtly blending with the next as only Jorge Monroy can do it and, of course, all of them connected by softly glowing filaments to the nebulous, swirling Eternal Light at the top.

This mural measures 3.8 by 6 meters, divided into four sections, and was done in acrylics. You can view it and several other outstanding paintings by Monroy anytime day or night at Infinity Funeral Home in Guadalajara.

The Painter in the Woods

To find out about Jorge Monroy’s latest projects and plans, I caught up with him at his studio-in-the-woods, hidden high in the hills of Pinar de la Venta at the edge of Guadalajara’s Primavera Forest. Here in his hideaway, he has tall pines and oaks for companions and the songs of mockingbirds, robins, solitaires and Inca doves for background music.

At one end of his spacious studio, where he can work on really large canvases if he wants, he has a desk with the largest computer monitor I’ve ever seen, the perfect medium for viewing his huge collection of digital photos of his works. “These pictures are all that I have of my old paintings,” he says. “Those canvases are all gone.”

Over a glass of fine Merlot, I asked Monroy about his recent and future projects. He opened a folder and showed me a set of ten large reproductions of paintings he has just finished for the National Cattle Ranchers Convention. “They asked me to paint the nine “suertes” or skills which charros (cowboys) must demonstrate in a rodeo,” he told me, “but I only had a couple weeks to do the job as well as my usual paintings for El Informador. I ended up producing 14 watercolors in three weeks. Honestly, I don’t know how I did it!”

When I asked about upcoming projects, I discovered that the Red Cross would like an eight-square-meter Jorge Monroy mural for the 100th anniversary of their founding in Jalisco, while the State Water Commission wants one (size unknown) for their new building in Chapala, and at the same time the archeologists in Teuchitlán are requesting numerous paintings to illustrate various displays in their new museum.

“A few years ago, I seemed to have lots and lots of time on my hands,” said the artist with a wistful look, “but now, I’m not sure when I’ll ever get a chance to fulfill my dream of many years, which is to go to Spain to make the Pilgrimage to Santiago de Compostela. It’s an 875 kilometer walk, you know, but for me it will be a camino de arte because, first of all, the Cantabrian Mountain Range is gorgeous and then all the bridges, hospitals, monasteries, etc. date back to the Middle Ages. Everything is beautiful and, of course, I want to paint it all.”

This is Jorge Monroy. “Whatever I see, I want to paint,” he says, but that is not his problem — it is his gift.

Mexico’s Lincoln: The ecstasy and agony of Benito Juarez 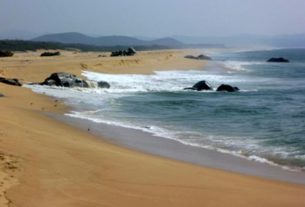