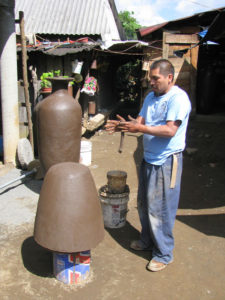 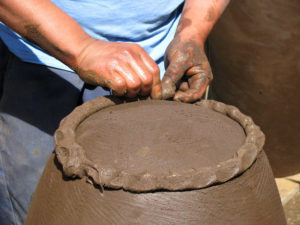 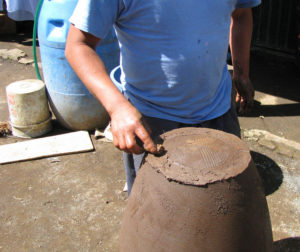 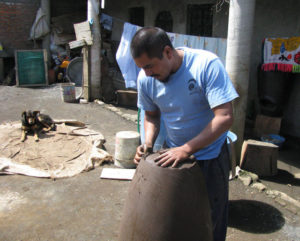 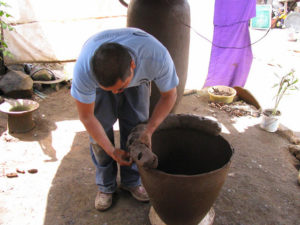 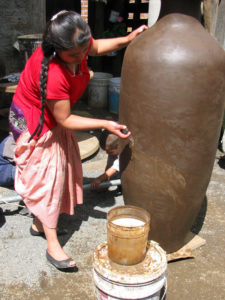 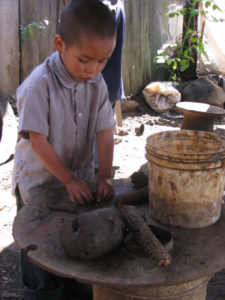 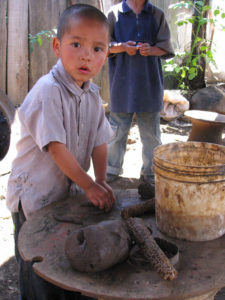 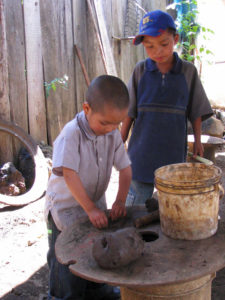 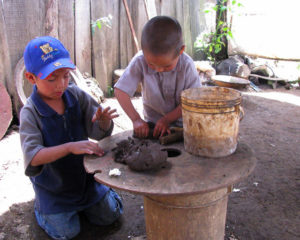 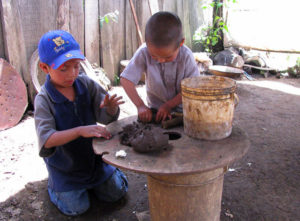 David Santos Alonso massaged the clay flower pot as stinging smoke skulked from the wooden cooking area. Inside the kitchen, his wife Maria Lydia prepared tortillas on a comal over a brick fogon next to a pot of water. Cocuchas — tall clay jars crafed in the Michoacan town of Cocucho — rose from the concrete floor and opened into sensuous lips in the dusky light; clay wrapped in plastic lay in the corner.

I had met David at the Morelia Expo Feria Artisan Show in May. Finding someone from Cocucho who could speak English and explain the pottery process made him a priceless asset. He and his mother, Juana, both had a powerful charisma that captured my attention. After my first visit with his mother at her home, I called ahead to see when he could help me interview his mother, and we set a time and day for me to make an additional trip to Cocucho.

When I arrived at Juana’s place, her relatives informed me she was in her corn field and for me to meet David at his home a couple of blocks away; Juana’s sister-in-law rode with me there. David and Maria Lydia (she goes by Lydia) planned to visit his mother later in the day. In the meantime, I sat and visited with them for a few hours while David worked on his cocuchas beneath some black plastic sheeting. Geraniums grew from pots sitting in the mouth of a tall cocucha with green moss creeping up the sides.

“I was in the States in Oregon,” David said as he placed a roll of clay over the top of a large flower pot, and formed it with a wet corn cob that closed any pores in the dough. He and Heraclio, the grandson of Herme-linda Reyes Ascensio (a local needlepoint artisan in Cocucho), had lived together in that faraway place, along with David’s brothers, Salvador and Guadalupe.

“I was working in the plant nurseries for like six years,” said David, dressed in a pair of blue Dickies and a tee-shirt as he smoothed the cocucha even more with a piece of particle board. “After that, I worked in a factory making moldings for houses.”

David said he had some problems with the police in Oregon where he’d lived between 1988 and 2002. “They put me in jail, send me back to Mexico. My first wife is over there. I have a lot of problems with her.” He’d met her in the states but she was from Cocucho; they’d had a son and daughter together, but he’d had no contact with them in years after their telephone number changed. He heard recently that she was planning to return to Cocucho, but he didn’t know any details.

David’s and Lydia’s two boys, Cesar and Lorenzo, now played outside next to a wet cocucha soak-ing up the sunshine, digging in the slate gray gravel around a barbell made of concrete disks mounted on a metal pipe. A black and white cat named Tzitziki — which means “flower” in Purepecha — rolled in the hard-packed earth. Acurious rooster poked its head around the corner before darting across the workshop.

Lydia left the cooking area and now worked on a cocucha jar that sat outside, rubbing a stone over its surface to make it smooth. David disappeared into the cooking area and returned with a large snake of clay that he draped across the top of the pot, then ran his hand over the piece to draw it into the piece. He worked with the same glowing energy as his mother Juana.

David said he was glad to be back in Cocucho making pots. “It’s how we have the job, my friend. We don’t have other kinds of jobs. I don’t work other kinds, just this.”

The boys are slowly learning the trade from their father, just as he learned from his mother Juana. “She let me do everything. When I was little, I started making little pots, some like little burritos, donkeys, dogs, little birds, lizards.” He looked at the tall pot on which he now worked. “When I was 11 and 12 years old I could make something like this. Cesar, he makes little ones. Lorenzo too.”

The two boys had been dashing about the alleyway between the kitchen shelter, the house, and the front wall between the yard and the street. Cesar took great pleasure jumping from the wooden porch onto the bare ground and racing to the kitchen and then back again, his baggy jeans scuffing together as his legs struggled to keep up with his boundless enthusiasm. Now he ran into the cooking area with a plastic pistol, took a few gulps of mango drink, left the pistol and returned to the house.

Suddenly, two jet aircraft flew overhead and David and Lydia urged the two boys to stop and look. The two children plugged their ears and gazed in awe as the two jets streaked overhead, then returned to their playing. Their mother made a run to the store and returned a few minutes later with bottles of Pepsi wrapped in her rebozo and a couple of onions. Cesar gleefully grabbed a small bottle of Pepsi and raced around the yard. A gust of excitement erupted on the street and David asked if I wanted some ice cream. I said yes and his wife returned with strawberry and vanilla ice cream cones for everyone, which we all vigorously consumed.

Now Cesar began making his own small cocucha at a small table next to his father’s clay, corn cobs, and water bucket. While David took frequent breaks from his own project to give his boy direction, Cesar broke a chunk of clay off the mound, rolled the piece into a long slithery snake between his tiny hands and across the table, folded it over, and rolled it some more.

He rolled another, then attached them to make a circle and pinched the shape into ridges, like bulwarks guarding a castle that would soon become a pot. The boy rolled more slivers of clay and placed them on top of the first layer, tightening his mouth into a little knot of concentration as he followed the process passed to him from his father. Lorenzo soon joined him, constructing his own slightly larger clay pot.

The two boys filled the workshop with their banter as they spoke in excited Purepecha while engaging in their apprenticeship as artisans. Their slow and free-spirited evolution into artisans of speech and craft, schooled by generations of discovery residing in the cradle of their parents’ consciousness, moved gently, methodically, through their souls, molding them into fresh manifestations of humanity.

On Mexican Time: A New Life in San Miguel – Review