I recently watched a video of women in the lush, green Papaloapan region of Oaxaca making yucca tamales. As is quite often the case with tamales of all kinds, it was a group effort. The labor-intensive culinary ritual involved in their preparation seemed a lot easier with the conversation and camaraderie that went on with the production of tamales de yuca. (The name of this starchy tuber has only one “c” in Spanish, making it sound a lot nicer than the English double “c” version, which gives its pronunciation an unfortunate similarity to “yuck.”) Filled with chicken and Oaxacan yellow mole sauce, and wrapped in “hojas de pozole,” the broad leaves of the Calathea lutea plant, these tamales could also have been made with pork, a popular choice, and wrapped in banana leaves.

Yucca appears in the cuisine of several tropical parts of Mexico, of which it is a native, including Veracruz, Tabasco, Campeche, and the Yucatan. It is made into fritters, tortitas (patties), and bolitas (battered yucca), and often flavored with orange, achiote, and other characteristic regional flavors. It is used to make “dough” for meat pie, eliminating the need for wheat flour dough, which is good news for the gluten intolerant. The very frequent use of yucca in dough-based recipes may partly be because of the high perishability of wheat flour in tropical climates.

In the Papaloapan region, yucca is often used in place of corn to make tortillas, especially during Semana Santa, when they are spread with black bean paste and accompany mole amarillo. It is also used in desserts and sweets such as budín de yuca, or yucca pudding, and torrejas, which are something like French toast. In Chiapa de Corzo, in the Grijalva River Valley of Chiapas, a regional dessert called suspiros is made with yucca and eggs, and closely resembles the Spanish suspiros de monja (“nun’s sighs”) except that yucca replaces wheat flour.

Sometimes called cassava or manioc root, yucca, or Manhiot esculenta, is high in Vitamin C and is a good source of fiber, as well as providing some iron and calcium. It is widely regarded as an anti-inflammatory, and the Journal of Inflammation states that it may be effective in treating both arthritis and intestinal infections. Its high carbohydrate content makes it a staple food in regions where it grows, just as rice, corn and potatoes are dietary essentials in other areas.

Yucca is similar in texture and firmness to the potato, and can be used in its place in soup and stew recipes. It should be stored in a cool, dark place and used within a week. In warm, tropical climates its shelf life is not as long, and it should be used within four or five days from being harvested by pulling it out of the ground. It can be peeled, covered with water and refrigerated to extend freshness, or frozen for several months. Frozen yucca is often found in supermarkets where the fresh vegetable is not available. When we lived in Oaxaca, fresh yucca was nearly always available in mercados and supermarkets. It can be boiled, steamed, or used as a dough.

When used as a dough, the boiled yucca should be thoroughly rung out to eliminate excess liquid, and passed through a food mill to eliminate any stringy fiber. The thick, dark brown skin should always be removed before preparing yucca in any dish. In Mexican markets, yucca is sometimes sold with the thick center fibers (part of the taproot) removed. If not, cut it away and discard it before slicing, chopping or grating the yucca.

One kilo (2.2 pounds) of yucca yields about 2 ½ cups of pulp. Try using yucca instead of potatoes in making French fries, or grate it, squeeze out liquid, and use it instead of potatoes in potato pancakes or latkes. Add it to a Yucatan or Chiapas style meat stew. Remember that yucca is fairly bland, so you’ll have a blank canvas for using the lively flavors of Mexican herbs and spices. 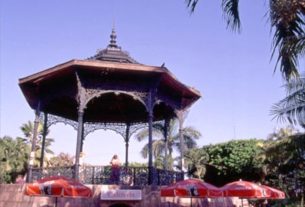 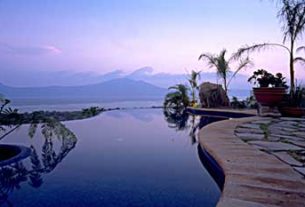 1 thought on “A Staple Food From Tropical Mexico – yucca”