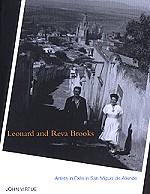 Virtue paints a much more complex and enthralling picture of Leonard Brooks than of his wife Reva. After a relatively uninspired start, Virtue’s discussion of their careers really comes alive after the couple moves to San Miguel in 1947.

Both Leonard and Reva were enormously talented. Virtue argues that circumstances conspired to make it virtually impossible for Reva to pursue her career as a photographer when confronted by Leonard’s own growing fame as a painter and author. Instead, Reva curtailed her own artistic development to become her husband’s most active and devoted promoter.

The single person normally credited with being the pioneer of the art colony in San Miguel is Stirling Dickinson, an American who settled here in 1937 to run the town’s first school of Fine Arts. In the aftermath of the Second World War, Dickinson managed to convince many others to brave the trip south and enjoy the stimulation of new sights and sounds while eking out a living by teaching. Leonard, who had finished a stint as a war artist, arrived with his wife Reva in 1947.

They intended to stay only a year, while they worked out what to do next. They ended up staying more than 50 years.

Shortly after setting up home in San Miguel, Reva began to develop her photography skills. She proved to be a natural, always insisting on holding her twin-lens reflex camera directly in front of her heart, to ensure she would “feel connected to the subject”.

When asked to take a portrait of a child who had just died, Reva overcame her initial reluctance and agreed. The series of photographs she took that day has become world famous. Her portrait of the child was included in the San Francisco Museum of Art’s “Women of Photography”, after the Museum selected Reva in 1975 as one of the top fifty female photographers of all time.

Her powerful portrait of Eladia, the child’s grieving mother, was entitled “Confrontation”. It was published in the New York Museum of Modern Art’s “The Family of Man” exhibit, “the most viewed photographic show in history.”

Reva earned the recognition of such famous exponents of her art as Ansel Adams and Edward Weston. She would continue to take outstanding photographs, but none as compelling as those in her “Dead Child” series. Reva was 90 years old when she died in 2004. Her rich legacy includes some of the finest photographs ever taken in Mexico. Samples can be seen at the

The one great unanswerable question is just how Reva’s photographic career would have developed if she had not decided to limit her hours behind the lens and in the darkroom to focus her energies instead on promoting her husband’s work.

Virtues’s meticulously documented work, full of details and anecdotes, reveals how San Miguel’s popularity mushroomed following an influx of GIs after the war visiting the town to attend the Fine Arts school where Leonard taught. A Life Magazine article in January 1948 only served to accelerate the trend.

Famous Mexican artists were also attracted to the town. For instance, David Alfaro Siqueiros, one of the “big three” Mexican muralists (alongside Diego Rivera and José Clemente Orozco) was invited to give classes. His appointment had unexpected consequences. Concerned about his left-leaning politics, and upset by his demands for unreasonable quantities of paint and other materials while executing a mural depicting Ignacio Allende, the art school’s owner closed it down.

Most of the teachers stayed on, opening a second school. It too ran into difficulties and closed in 1950. This time, several teachers, including Leonard and Reva Brooks, were given an armed escort to the border and expelled from Mexico under the infamous Article 33 of the Constitution. Fortunately, with the help of a campaign orchestrated by Siqueiros and other sympathizers, and of General Ignacio Beteta, who greatly admired Leonard’s paintings, the order was quashed ten days later, and Leonard and Reva were able to return. The art school moved to the Instituto Allende in renovated eighteenth century buildings with huge grounds.

As Virtue points out, anti-American sentiment is not a new phenomenon. In the early 1950s, the local priest in San Miguel, Father José Mercadillo, expressed violently anti-American feelings, going so far as to claim that Americans were “determined to make San Miguel a focus of communist propaganda”. There certainly were some American communists in the town, but Mercadillo eventually saw the light and became a true friend to the foreign community.

Claims about communist cells in San Miguel continued throughout the 1950s. Bart Quint, writing in the New York Herald Tribune in 1957 claimed that “two of Mexico’s most picturesque colonial communities – Cuernavaca and San Miguel de Allende – have become the headquarters of some of America’s riches and most active communists.”

And certainly, the exploding art (and music) scene in San Miguel attracted all kinds of luminaries to the town, from politicians and writers to artists and film stars. Even Hollywood moved in. The movie “The Brave Bulls”, starring Mel Ferrer, was filmed in San Miguel, leading to the memorable headline “Paradise of the Depraved” in the Mexico City daily Ultimas Noticias.

Virtue’s anecdotes recall a veritable who’s who of San Miguel society, including Heath Bowman, Charles Allen Smart and Mackinley Helm among many, many others.

Leonard the painter and author

Leonard Brooks’ reputation had grown. He “painted Mexico as the Mexicans painted it”. While his early paintings were usually representational, many of his later paintings were impressionist or abstract. They included collage acrylics, many inspired by his San Miguel studio and garden. A series of exhibitions in the 1950s received favorable reviews. Leonard’s paintings, and prints of Reva’s photos, were bought by most of the famous visitors to San Miguel, including film director John Huston.

Sales of his paintings were modest, but sufficient to encourage him to make regular trips to Canada, taking paintings to galleries in Vancouver and Toronto. In the late 1960s and 1970s, Leonard’s paintings, tapestries and collages were featured in several hugely successful exhibitions.

Inspired by his success teaching students, Leonard recognized the potential for “how to” books for artists. He wrote several best-selling books on painting techniques, bought by both beginners and professional artists, covering subjects such as watercolor, oils and collage. He also found the time to illustrate two articles in the popular monthly Ford Times, including an article about Mexico in the December 1953 issue.

Besides being a painter, Leonard Brooks was also an accomplished musician. He played first violin in numerous concerts with the Guanajuato Symphony. In the 1960s, he effectively launched, single-handedly, the San Miguel music scene, when he started to give free music lessons to local children. He badgered and cajoled friends into donating instruments and time, and subsequently headed the music program at the San Miguel Cultural Center for 25 years. Many famous musicians spent at least part of their vacation time in San Miguel; some played in his Chamber music quartet. Leonard encouraged dozens of local youngsters to play the violin. Among them were Daniel Aguascalientes and his five brothers. In 1976, they formed the now famous group Violines Internacionales de los Hermanos Aguascalientes, which plays concerts throughout Mexico and in some U.S. cities.

In 1992, the Leonard and Reva Brooks foundation was established at Queen’s University in Kingston, Ontario. The aims of the foundation include ensuring the conservation and display of their joint art and photography collection, and providing scholarships and financial aid for Mexican students to study music at Queen’s University.

Any misgivings that Leonard might have had that his art was more appreciated in Mexico than it was in his native Canada, were finally laid to rest in 1998. In June of that year, both he and Reva held one-person shows in Toronto and in Kingston. The exhibitions, supported by national TV and press interviews, were a great success. Reva’s prints at the Bulger gallery in Toronto attracted the largest crowd the gallery had ever witnessed.

Leonard and Reva Brooks made a truly extraordinary contribution to San Miguel de Allende. Without them it would surely not have become the place it is today.

The source for this article, and all quotes, is:

Getting to the heart of Oaxacan cuisine: A cooking class with Susana Trilling