The objects in my house have become a form of dialogue between my housekeeper Yolanda and me. I put things in places where they are artistically pleasing to me. That is why the Virgin of Guadalupe has resided for a year in my bathroom, along with other sculptures and paintings of female forms.

But when I arrived home after a month in the States, I found my large terracotta Virgin moved to the small table below my entryway nicho. Around her were placed a few cacti in small pots that I’d had up in the nicho next to a grouping of stones, greenery and pre-Columbian replicas. Now the Virgin stood solidly in front of them, the nubs of white candles rising from attached candelabra on each side of her.

Yolanda had promoted the Virgin from being a mere decoration to her proper place of prominence during this pre-Christmas week that in Mexico is dedicated to the Virgin. I agreed with the sentiment, but not with the esthetics of placing her in front of what I considered to be the artistic focus of my entryway.

And so Yolanda returned to work on Wednesday to find her Madonna respectfully installed into her own shrine atop the dining room buffet. Around her were clustered the female forms that I have been collecting for most of my adult life. Only recently have I realized that they are all Madonnas.

In a clay sculpture made by my friend Dan, the effigy of a baby doll rises from a teacup. Over her head is draped a mantle. A kneeling woman is a replica of a thousand-year-old figure in the Peking museum. The standing totem with ammonite head attachments that extend like an exaggerated chignon is a universal female spirit fashioned by an acclaimed California artist who also happens to be a friend. Other regional Mexican Madonnas share space with the figures of pre-Columbian women, their stomachs swollen with child. Keeping watch over them all is a crude terracotta angel with wire-attached arms and blue polka-dotted skirt. Out of her half-eggshell head sprout cutoff lengths of horsetail reeds.

Candles and greenery complete the shrine, which marks a halfway point between Yolanda’s Catholic devotion to established ceremonial patterns and my more individualistic devotion to creating my own rituals.

As I enter the room, Yolanda is examining the figures. ” Rata o murcielago?” she asks as she examines the figure with shell extensions. “Is it a rat or a bat?”

Yolanda looks puzzled. The unusual universal spirit fashioned by my friend Sharon cannot be stretched by her eyes to look like any Madonna of her experience. It is confusing, these foreigners who draw their spiritual strength more from the art of objects which symbolize faith than from the faith itself. But it is one of many things we have come to accept in each other in the one-and-a-half years we have been in close acquaintanceship, and when I next enter the room, I notice that she has lit candles in front of all of the Madonnas – both hers and mine. 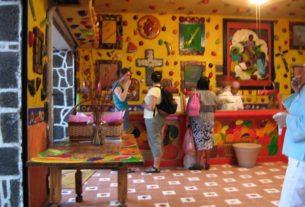