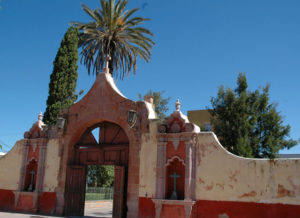 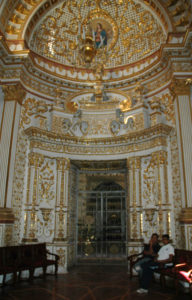 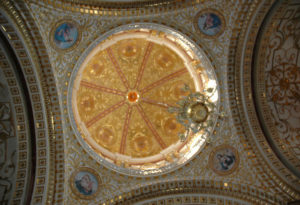 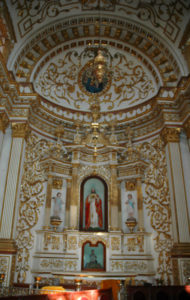 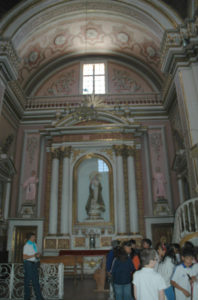 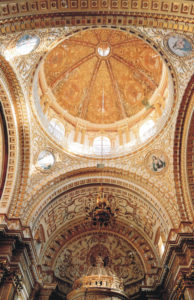 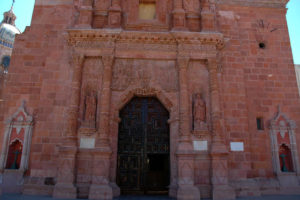 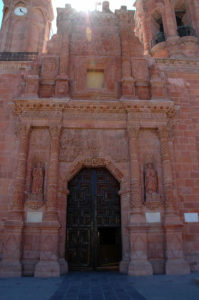 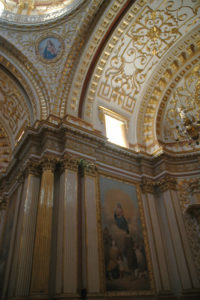 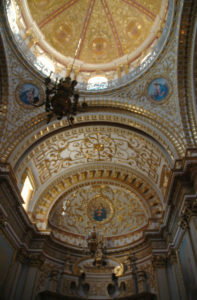 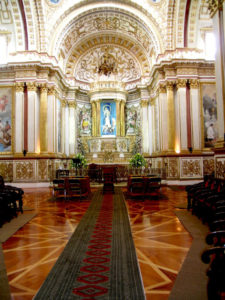 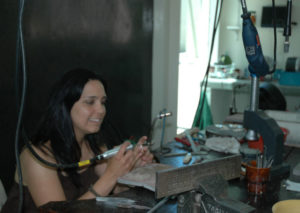 There are also tables where townspeople line up to buy regional treats such as empanadas – pastry turnovers stuffed with sweetened condensed milk, freshly made panela cheese and a sweet made from tuna, the fruit of the nopal or prickly pear cactus. These are sold along with gorditas, flavored ices and nopalitos with red chile and pork.

It is a lively scene, beguiling in and of itself. But the real prize of Guadalupe is just across the street in a complex of historic buildings housing the magnificent Church of the Virgin of Guadalupe with its three chapels and a convent, home to Franciscan monks. Part of the convent, once the largest Franciscan convent in the world and now home to the last order of Our Lady of Guadalupe in existence, has been turned into the Museo de Guadalupe. It is here that the wonderful art that belongs to the convent – seemingly endless rooms filled with religious artifacts – is on display.

“It is one of the largest collections of religious art in North America,” says Arturo Villanueva, our tour guide today, who notes there are some 1,000 exhibits.

Indeed, as we walk from room to room along the clay brick floors worn by the footsteps of monks whose feet trod here for more than three centuries, we are presented with an amazing collection paintings, statuary, furniture and aged manuscripts.

“Many of the major religious paintings from the 18th century are here,” continues Villanueva as we climb to the second floor on broad stone steps and the immense floor-to-ceiling oil painting Virgin of the Apocalypse by Miguel Cabrera comes into view. There are other works here by Cabrera, founder of Mexico’s first academy of painting, including The Veneration as well as the famed La Anunciación by Cristobal de Villalpando, which was begun shortly before the monastery was built in the early 1700s.

It’s quiet in the museum. We are the only ones here on a Wednesday morning and it adds to the atmosphere of almost being immured in the past. The ceilings are wood timbered and the carved wooden doors that connect the passageways are imposingly large. Part of the monastery was built around a courtyard and we can view the domes and towers of the outside through casement windows as we walk along the corridors.

The four segments of the courtyard square are on the second floor – or was it the first? It’s easy to become lost in time and space here as galleries and courtyards seem to lead off in all directions. Here, a progression of enormous oil paintings depicts the progression of the life of Saint Francis. Turning a corner and following an old hallway, suddenly we are at the doorway of the biblioteca, which contains hundreds of volumes of books, including the Libro de Antiphons or book of chants whose pages, Villanueva tells us, are goat skin and held together with glue made of pig skin.

There are also maps, the desk and table used by the monastery’s librarian and even a selection of spectacles. It is an enchanting look back in time. Nearby, a warren of small rooms, the cells where the monks used to sleep, gives us a view of the austere life of monasticism.

Outside in the bright sun, we walk next door to the cathedral, built in 1707, with its three chapels – the Sanctuary of Our Lady of Guadalupe, the Dark Chapel and the Chapel of Naples.

Villanueva tells us that the exterior is made of cantera rosa, a pink quarry stone also used in many of the buildings in Zacatecas. The intricate Baroque-style carvings are made by immersing limestone in water for several weeks until it becomes soft and can be carved. Then, as it dries in the hot sun, it becomes a hard stone again.

We walk first into the Sanctuary of Our Lady of Guadalupe, a magnificent overload of gold, cream, rose and maroon with arches, columns, vaulted ceilings and a feeling of immense richness and peace.

A painting of Our Lady Of Guadalupe is encased in an 18 karat gold frame and flanked by gleaming white pillars and side panels of gold and pink. This is the centerpiece in a room filled with gold, statuary, candelabras and an extremely ornate altar. The sanctuary is open to all, but Villanueva mentions that the Capilla de Nápoles or Chapel of Naples, to the left side of the entrance way, is frequently closed except for special occasions. However, he has secured us admission and we walk towards the chapel, built in 1847, unprepared for the sense of awe we feel as soon as the door swings open. The room is shaped like a cross with the walkway to the main altar being about twice as long as the two aisles that jut to the side. All lead to statues enshrined by gold columns, alabaster white walls and a domed ceiling highlighted with gold filigree. Colorful statues of saints flank the columns. Delicate paintings of Biblical scenes are encircled with gold. The wood parquet floors are also gold and white, and the walls that aren’t covered with gold are painted with religious murals.

There are three types of gold here, Villanueva notes and from what he says, I can assume that the closer you get to heaven, the more costly it is. Up to the chair level, the gold is 14 karats, up to the ceiling it’s 18 karat gold and the ceiling is 24 karat gold.

The paintings on either side of the altar are made of silver and relics of bones. Crystal and gold chandeliers hang from the ceilings. The room has a Versailles-type feel and it’s as if we are encased in the most beautiful of jewel boxes.

After all this gold and creamy ivory, we are somewhat jaded when we step out into the courtyard in front of the entrance way, walking past the fountain and through the large wooden doors set into the stone barrier fence. If gold defines the interior of Guadalupe with its magnificent chapels, we are now on our way to view the ore that provided the money for the gold – silver, which was mined in the mountain ranges surrounding Guadalupe and Zacatecas. Between the sprawl of homes and shops that connect Zacatecas to Guadalupe is the Centro Platero de Zacatecas, a modern collection of buildings which house silver workshop. The artists, both men and women, do their silver work behind glass counters filled with finely wrought silver jewelry. It is a friendly place, with jewelers cheerfully talking to their customers as they use tiny mallets and butane torches to create their works.

It is busy here. Businesspeople in suits mingle in the broad plaza which fronts the U-shaped collection of buildings. Visitors, looking for bargains, enter and exit the numerous shops. A catering service sets up tables for an outdoor lunch. If the convent and museum represent the history of Guadalupe, the bustling Centro Platero de Zacatecas showcase its present.