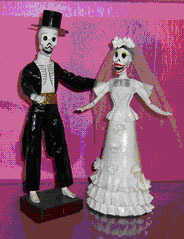 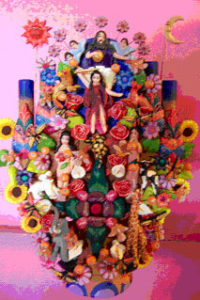 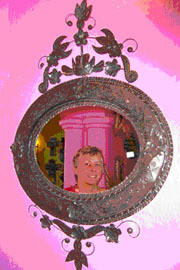 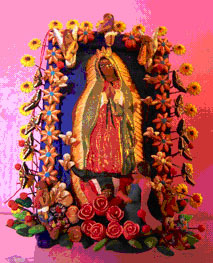 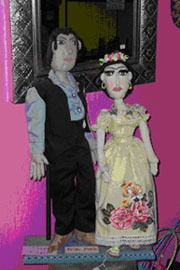 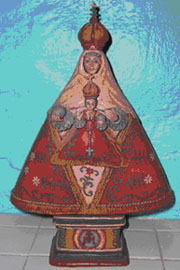 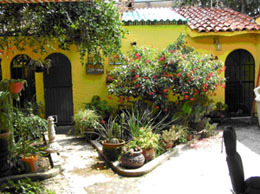 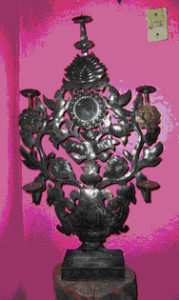 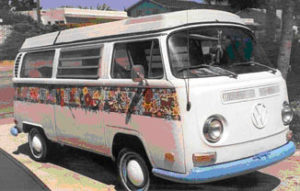 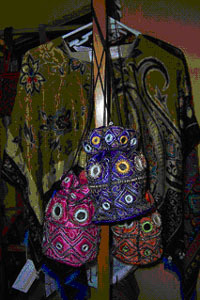 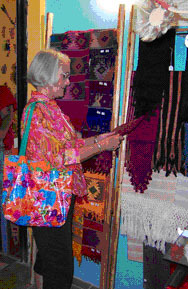 “In Mexico I have found an outlet for creative talents never tapped before. You can do what ever you want. Pick up a plastic bag and make something out of it. Pick up a seed pod, paint it and add legs, and it’s an animal. Where else but in Mexico would someone put a fancy dress on a skeleton and create a whole new art form?”

Anyone who has lived in Jalisco’s Lake Chapala area for very long probably knows Marianne Carlson — if not in person, at least by sight or reputation. Since opening the Avant Gourd gallery in Ajijic in 2000, she has moved and changed her gallery name several times, and she has just opened a new one — the “Galería Maestros del Arte” at Ramon Corona 11, just a few doors north of the Lake Chapala Society.

As you enter, you will probably find Marianne seated at the desk to your right. If not, you will know her by her smile and her short blond hair. Always in shorts and a sleeveless shirt, she is perpetually busy. Ambitious, energetic and generous, she has done much to promote the work of artists throughout Jalisco, Michoacán and beyond by first seeking them out and then by buying and reselling their art in her gallery.

The gallery is a feast for eyes. An entire shelf of Catrinas (fancifully dressed female skeleton sculptures) shares a wall with a number of Marianne’s own sculpted and painted gourds. One room holds a long wall full of huipiles (loosely fitting blouses), another of colorful rebozos and beautifully embroidered purses. Tin ornaments, ornate metal mirrors, wooden carvings and a kaleidoscope of colorful clay and wooden sculptures cover lime green and vivid pink walls.

In 2001, Marianne started the Feria Maestros del Arte, a three-day yearly event that brings in artists from all over Mexico.This year for the first time, an entire busload of artists will be coming from Oaxaca, bringing alebrijes (hand-carved wildly painted animals and figures), ceramics, weaving, miniatures, carpets, and papier-mâché.

At the Feria Maestros del Arte, there will be an entire booth of Catrinas sculpted by Laureano Martínez Guzmán and painted by his wife María. “They aren’t your usual Catrinas,” says Marianne. “María’s sense of color is not typical of most Mexican art. Her colors are more muted and lifelike and they don’t cover the figures in the heavy glaze typical of most Catrinas.

Returning artists will display a wealth of art forms. There will be handmade paper from Puebla, silk and cotton hand-woven rebozos from the state of Mexico, Ojeda knives and hand-carved masks. Recycled papier-mâché flowers are crafted by handicapped and troubled children of the Centro Integración de Tapalpa A.C. in Tapalpa, Jalisco. Punched tin objects, assemblage wreaths, huipiles and other hand-embroidered items by José Flores can be seen. In addition, there will be lots of Catrinas, as well as pineapple pottery from Michoacán made by another “Great Masters” artist, Hilario Alejos.

In between Ferias, the work of most of these artists can be found in Marianne’s gallery, whose three colorful rooms are stuffed with intriguing folk art, including her own fanciful painted gourd art.

“I probably travel about four weeks a year, looking for new artists,” Marianne says. Sometimes she flies, but more often she can be seeing tooling around in her 1970 Volkswagen Bus.

“I bought it nine years ago, before I moved here,” she explained. “I knew I wanted a Volkswagen in Mexico, but it was so ugly. It was totally white, but so beat up that I drew the symbols all over it and invited all my friends to a party to paint it. I had it all set up with chairs and paint cans all around the van. I put a paintbrush in the right hand of each friend and a glass of champagne in the left and by the end of the evening, I had a freshly painted van. They all signed their names. It was a way to bring my friends with me. I’ve touched up the paint a few times since moving to Mexico, but essentially, it’s as my friends painted it. I’ve even named her ‘Tawanda’ for the female battle cry in Fried Green Tomatoes (a book by Fanny Farmer that has also been made into a movie.)

Marianne’s pre-Mexico life was as varied as the illustrations on her van. After growing up near Seattle, she worked as the manager of an Arabian horse ranch, ran a wine tasting room in San Luis Obispo and worked in a graphic and copy shop, a stereo place and for the county. Her last job before moving to Mexico was at the Diablo Canyon Nuclear Power plant in San Luis Obispo.

Always crafty, she had made beaded jewelry and had also worked in macramé and as an airbrush artist, using clothing as her canvas.

“Moving to Mexico opened my creative doors,” explains Marianne, “The juices started to flow. Although I am very computer literate and have done a bit of contract computer work since I moved here, basically I didn’t want to do that anymore. In Mexico I have found an outlet for creative talents never tapped before. Now I’m so busy I don’t have time to do it all. In Mexico, we have a lifestyle conducive to doing more with our lives. The tranquility and beauty of this place, the fact that so many other artists live here, prompts everyone to take chances. Why not? There’s definitely something about Mexico that makes a lot of people explore new areas. You can do what ever you want. Pick up a plastic bag and make something out of it. Pick up a seed pod, paint it and add legs, and it’s an animal.” (Indeed, Marianne sells these animals made from the seed pods of the poinciana tree in her gallery.) “Where else but in Mexico would someone put a fancy dress on a skeleton and create a whole new art form?”

This spirit of inventiveness is not limited to art. Once, when on one of her art excursions, Marianne noticed a wobble in her wheel. Stopping quickly by the side of the road, she discovered that her wheel had come entirely off and was being held in place merely by the metal cover, which extended partially over the wheel.

“A kind Mexican man stopped and within minutes had hand-fashioned a temporary cotter pin out of a nail. It held long enough to get to a garage.”

The fact that she would move from a job in a nuclear power plant to an artist community in Mexico is not so hard to understand after she reveals more of her life.

“I’ve been travel-ing around Mexico for 40 years, initially in Baja; but the first time I traveled to the mainland, I knew I’d live here one day. I first moved to Mexico 22 years ago. I lived in Cancun the first year it opened as a resort. It was wonderful, but it wasn’t the right timing for me. I traveled to Belize and went to Spanish language school in Guatemala. That’s where I started learning Spanish. I went back to the States, but I always knew I’d wind up back in Mexico. It just took awhile.”

“Now I never address a Mexican in English. I always use Spanish. I need to refine it and I will, but basically, I can get in and out of any situation without resorting to English. One of my first words was ‘ despacio‘ (slowly) and I still use it a lot. Mexican people are so willing to help. It’s got to be the easiest country in the world in which to learn a language.”

“The first time I drove into the Lake Chapala area, I knew it was the place for me,” she confesses. Since then, she has moved to four different houses within the area. Most recently, she has bought a house in Chapala less than two blocks from the market square, and she knows this is where she’s going to stay.

Early in September, she told of her upcoming plans. “Tomorrow I’m taking off in Tawanda to try to find an up-and-coming tree of life artist in Metepec. Someone who is good but unknown, with reasonable prices.”

And she found him, too! We will see him at this year’s Feria, which will be held on November 10, 11 and 12 from 10-4. For the second year, it will be held at La Huerta, the events center just West of the Ajijic Cemetery on the Chapala-Jocotepec highway. This year there will be two golf carts ferrying customers and packages to and from their cars in the parking lot or along the carretera. Admission will be 20 pesos and customers can re enter as many times as they wish on the day of purchase.

This year, the bar, restaurant and dessert table will be prepared and managed by a newly-formed lakeside Mexican women’s cooperative. Thirty pesos will buy breakfast of several egg options accompanied by a tamale or refried beans, tortillas, and a beverage: coffee, tea, agua fresca fruit drinks or atole (a special Mexican drink made out of masa, the ingredient from which corn tortillas are made.) Café de olla, chocolate and atole may also be purchased separately. Midday fare will include quesadillas, burritos and other authentic Mexican dishes. These dishes will include a beverage for 50 pesos. The daily specials will be chiles en nogada (stuffed mild chili peppers with nut sauce) on Friday, birria (goat) or chicken in mushroom sauce on Saturday and pozole (hominy soup) on Sunday, all for 60 pesos each. For dessert, the women will create their special “Impossible Cake,” which is chocolate cake with flan custard on top, as well as other treats prepared by a dessert chef. The bar will offer additional beverages and drinks.

Other activities will include a fashion show of traditional Mexican clothing each day at noon.

One of the other benefits of the fair is that it gives locals a chance to meet and interact with artists from around Mexico. Every year, Ajijic citizens play host to various artists. Ajijic locals who would like to host individuals or families can contact Donna Williams at 376-765-5937 or at dwilliams82@prodigy.net.mx

A further opportunity to meet the artists will be the Friday night “Meet the Maestros” reception where the public may share in wine, hors d’oeuvres, music and conversation. Only 100 tickets are available for 150 pesos each. Tickets will be sold beginning in October at Galerîa Maestros del Arte, Ramon Corona 11, or call Marianne at 376 765 7485 to pick up or reserve tickets.

If this story about Marianne and her gallery has slowly shifted into a story about the feria, it is probably appropriate, for this is how her life always seems to turn out — her own needs becoming intricately intertwined with the needs of others. It is never enough to remain as-is, for there is always a new artist around the bend, like this year’s addition of Tonalá mask artist Prudencio Guzmán.

Whatever vision Marianne has of her own future, it will most probably involve Mexico. 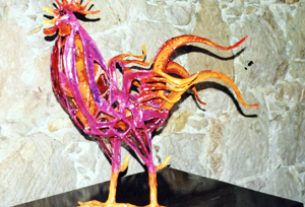 Where to shop for leather goods in Leon, Guanajuato?