I think that it is time to cover some of the Spanish terms used in construction. There isn’t room in the space I have for this column to cover all the terms but perhaps a brief primer is in order.

First, the proper term to use to address any worker is not “usted” but “tu”. If you use usted you send a message that you really don’t want to send. Usted infers respect in a way that allows an alvanil (mason) to do what he wants, as opposed to what you want. It tells the alvanil that he knows more than you do. He doesn’t, simply because he is not going to live in your house. You are!

Now for some of the terms used for the material. Arena is the word for sand. There are two types of sand one is arena del rio and the other is arena amarilla. With river sand you use cement and only cement as the binding agent. With yellow sand you use cal and cement for binding agents. Yellow sand also has salt in it which can “boil” out in plaster after the plaster dries and is subsequently exposed to moisture. This condition is known as salitre. This fact can influence what mix is indicated for what areas. For instance, a yellow sand plaster mix would not be suitable for the outside walls of a house.

Other building material that one should know is laja (flagstone), cantera (cut stone), roca quebrada (broken rock which comes out of a quarry), and roca bola (rock picked up out of fields). Laja comes in three common types: Laja de Sous is a local flagstone which is the least expensive but rather thin at times. Laja de Talpa, which is more expensive but flatter and thicker. Laja de sangre de pigon, is the most expensive, but thick and rather pink or red in color.

Cantera is any cut stone. It can be in the form of tiles, columns or in the form of arches and other structures. There are three common types of this material as well. One is cantera negra, one is cantera blanca, and the other is beige. There are as many variations on the color theme as there are uses for cantera.

Rocs quebrada is quarry stone popular for building walls. It is a large crystal and has many straight edges, which makes wall building easier. Roca bola is rock that is actually picked up out of the fields. It is just as hard as the quarry rock and is just as easy to use for walls although the alvanil has to know something about breaking it. The grand advantage of roca bola is that it costs considerably less than roca quebrada.

There are two types of arches (arcos) that can be formed. One is the arch, which is a segment of a perfect circle; it is known as arco de punto de centro. The other arch is more like an ellipse and is called arco de punto buscado. I won’t give away the albaniles secret for forming it, but I will tell you that the only tools they use are a stick, a string, and a pencil.

To make a building or a wall straight you need to know where level is. The word for level is nivel. Nivel is buscado with a mangera de plastico claro or clear plastic hose. The hose is nearly filled with water then one end of the hose is held up to a mark on one side of the area to be leveled and the other end of the hose is held up to the other side. When the water stops moving in the hose the alvanil can mark two points that are exactly level.

I hope you enjoyed this little Spanish lesson in construction terms. Who knows, it could come in useful – sometime or another.

Mr. Worthington is a long-time resident of the area, builder and landscape architect. 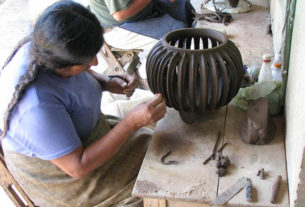 3 thoughts on “Spanish terms for building and construction in Mexico”