Anyone interested in purchasing land Lakeside has watched the prices skyrocket over the last two years. It’s next to impossible to find single lots because the contractors are buying open land, subdividing and offering construction lots — a combination land and building deal.

Several friends and myself banded together a couple of months ago and decided we’d look for a parcel of land large enough for eight to ten lots, get a good deal and subdivide ourselves, providing the necessary infrastructure–water, access roads, electricity, and phone.

Two of the participants are contractors, so it’s not as crazy as it seems. In the process of looking for land, we’ve learned a lot about Mexican culture, customs and laws.

We’ve looked at nearly twenty properties. About six weeks ago we found the perfect parcel. Sloped up the mountain side of the highway, each lot has a beautiful lakeside view. We found out about the property before it was listed on MLS through a new realtor who is a friend of one of the couples in our investment group. The property is listed with a new real estate agency and, because the realtor is new in job, the broker from the office oversaw the transaction. Another woman in his office was the listing agent.

Agents here really do work for the seller because that’s who’s paying their commission. We knew this, and hired an independent attorney who is Mexican and fluent in English, having worked previously in the States.

We were shown a copy of the registered deed with an attached drawing of a triangle-shaped lot of 6900 square meters. After hours of drawing, we agreed on a nine-parcel subdivision with lots ranging from 600 to 1100 square meters. We amicably agreed among ourselves who would own each lot and we had the attorney write up an offer for the entire parcel with several contingencies:

1. Water rights needed to be available
2. The property had to pass requirements for drainage and sewage.
3. We required access to the property from the highway (the owner of the lower piece of property had constructed a huge wrought iron gate, restricting access to the road leading to this property).

Electric and phone access was already available to the property above ours and water from a well on the lower property was pumped up to a midway holding tank (above the piece of property we were interested in) to service the owners above.

Maybe we could get the owner of the well to sell us water rights. The broker told us a new municipal well was just completed only 100 meters from the land we wanted and would begin operation within a couple of weeks.

Our attorney went to the records department and searched out the title. It turns out the broker neglected to show us the last page indicating the 6900 square meter parcel we were making an offer on had never been legally subdivided from the property across the road.

We added a fourth contingency. The owner must officially subdivide the two parcels and register the road as a public access road. We were told by the broker that by Mexican law, since it had never been registered, after ten years, it automatically became a public access road. The owners of the land we were interested in would force the owner of the land below us to take down her gate.

We were still worried about water, so the broker said he’d check with the water company. In a few days he informed us it would cost about $2,000 per subdivided lot, to bring water to our land. The asking price was $150 pesos per square meter. Adding that substantial one-time water access cost, and the rest of the improvements necessary, we figured our total price at $220 pesos (or about $22 US) per square meter. Lots one-half mile away are currently selling for $900 pesos per square meter.

We asked to get the quote in writing, but were informed that the water company wouldn’t do that.

Our attorney paid a visit to the water company. The well, it turns out, is 260 meters away, and they expect it to be operational sometime late spring. Remember, that’s Mexican time. The water company wouldn’t make an estimate this far in advance, but when they did, they would put the quote in writing.

It also turned out that the broker had no signed listing. Just a handshake agreement that he could sell this piece of land.

Misrepresented? You bet. No listing, no registered plot, no access road, no water. We backed out of the deal, poorer, but a lot smarter. We each paid $117 US for the attorney’s services. We’re sad we didn’t get that property, but we’re glad we didn’t end up paying thousands of dollars for land we could neither access nor bring water to.

Fraud? Probably. But a lawsuit against Mexican nationals by expatriates is a very unproductive activity.

We’re still looking. I think it would be wonderful to live in a neighborhood with friends, reduce costs through buying materials in bulk, leverage construction supervision and have some level of control on what might be built next to you. For example, we had all agreed to build single-level homes and alternate them up the slope so no one’s view would be obstructed, to share in the cost of common walls and provide for a small common area where we could occasionally have outdoor potlucks.

We know that the lots will double in price simply by subdividing and improving them and believe that by eliminating the developer and marketing costs, our homes will double in value as soon as they’re built. To me, this will be a fun, educational and profitable project.

There’s still beautiful land available, but most parcels are bigger than we need. Anyone out there interested?

PS. Some of you have expressed interest in the progress of my book, titled “Midlife Mavericks: Ordinary Women. Extraordinary Choices.” It’s about women reinventing the second half of their lives in Mexico. I now have a wonderful New York agent. She believes in the book and is, as we speak, trying to rustle up a publisher. 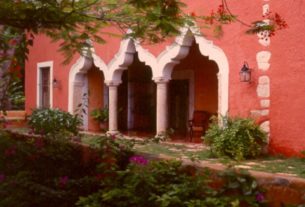 September in the Mexican sierra: an abundance of apples