There was sunlight pouring through the stained glass window depicted on this month’s cover, as I sat down to interview its creator, Sergio Aimar, at his studio and home in Seis Esquinas. Born in Mexico City on October 7, 1968, his parents moved to Guadalajara six months following, where young Sergio remained until he was nearly seventeen. Pursuing a life-long interest in art, he left Mexico to study a variety of disciplines in San Luis Obispo, California.

At college, Sergio took drawing, painting, graphic design and more, but was never satisfied with the fruits of his labors; something was missing. He told me how he spent the summers of that period picking fruit in British Columbia to finance his studies, which was also where he was introduced to the art of stained glass. In this exciting format were the brilliant colors he had always searched to create, but now with the help of the sun as opposed to the brush and canvas. He apprenticed himself to a Quebec artisan for a winter and returning home to Mexico, has practiced his craft for the past nine years.

He spent nearly a decade at his ranch in Durango, where he farmed cattle, grew corn, beans, and fruit, and made stained glass doors, windows, and lamps, some of which he sold or exchanged with artist friends for samples of their work. Sergio enjoys the solitude and concentrated nature of stained glass work which, he says, he can do for ten to twelve hours a day quite happily listening to music. With his wife Marta, and their children, Brandon, 4, Maria Fernanda, 3, and Andrea, 7 months, he recently decided to move away from the ranch to somewhere that would offer his kids a better education. Sergio has never been a fan of large cities, and chose to settle in Ajijic five months ago, for the tranquility and a market for his wares.

Sergio makes his own designs or works to spec patterns. He visits the site where the stained glass is to be installed and gets an idea of what colors and shapes would be harmonious in the setting, what kind of light he’ll have to work with. 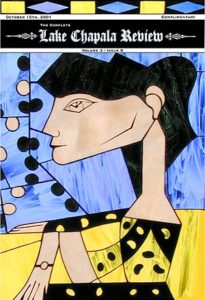 Approved designs are transferred onto craft paper and the individual segments cut out to trace the pieces of glass. The pieces are then cut and polished before being edged with copper foil; the foil is what the solder adheres to and fuses the glass segments into a finished stained glass piece. There is also the older, straight lead technique, where lead foil is used to separate and hold the fragments. Sergio prefers the copper foil which allows for finer detailed work, but for some clients the antique, bulkier style of lead is the effect they’re looking for. The stained glass window featured on this month’s cover is a reproduction of a Picasso painting, recently commissioned by a local resident.

Sergio is a warm, reflective person and well suited to his chosen art, which requires patience, precision and feeling. He told me he enjoys the labor, though, and helping choose the colors that will shine into peoples homes and lives.