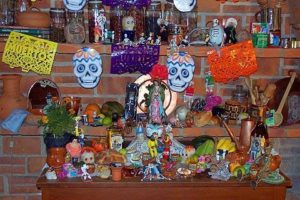 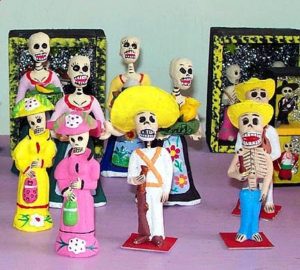 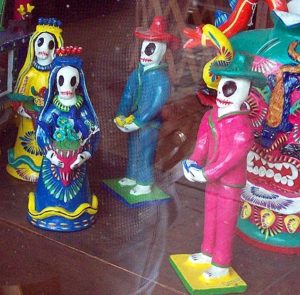 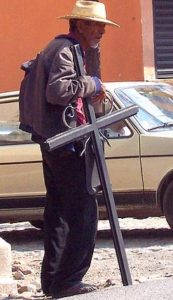 Foreigners have more trouble understanding Los Dias de Los Muertos than any of Mexico’s other fiestas. At first glance, Day of the Dead decorations, colored paper garlands, little skeletons performing daily tasks and sugar skulls inscribed with names remind visitors of Halloween. Other tourists discover that much like Memorial or Remembrance Day back north, families here visit, clean and decorate graves of loved ones for the November 1 and 2 holidays. Many families honor their ancestors and dead with home altars, laden with harvest fruits, traditional bread with crossed bones on dough on top, all to greet the spirits as they return to the home for 24 hours each year.

Blending ancient cultures with the church

This holiday is a perfect example of the complex heritage of the Mexican people. The beliefs of today’s Mexican are based on the complicated blended cultures of his ancestors, the Aztec and Maya and Spanish invaders, layered with Catholicism. The origins of the Days of the Dead reach into the ancient history of Europe and Mexico. In the eighth century, the church decreed November 1 as All Saints Day. Setting aside the day to honor the martyrs and saints was an attempt to replace the 2000-year tradition of the Celts and their Druid priests who combined harvest festivals and celebrated the new year on November 1.

The Celtic dead were believed to have access to earth on Samhain, October 31st, when the boundary between the worlds of the living and the dead relaxed. The Celts danced around huge bonfires, wearing animal heads and hides to confuse the spirits and burned crops and animals as offerings to the returning dead.

Around the end of the first millennium, the church reinforced its attempt to cover the Celtic celebration by designating November 2 as All Souls’ Day to honor the dead. All Souls’ Day was celebrated with parades, big bonfires and the people dressed as saints, angels and devils.

In the language of the day, All Saints Day and All Souls’ Day were known as All-hallowsmas, and October 31 was “All Hallowed’s Eve” or Hallow’e’en.

When the Spaniards arrived in Mexico they encountered two-month celebrations honoring death, the fall harvest and the new year. For more than 500 years, the goddess Mictecacihuatl (Lady of the Dead) presided over Aztec harvest rituals using fires and incense, costumes of animal skins, images of their dead and offerings of ceramics, personal goods, flowers and foods, drink and flowers.

While the church attempted to transform the joyous celebration to a suitably tragic image of death and a serious day of prayer focusing attention and reflection on the saints and martyrs. The people of Mexico did not fully adopt the early priests’ ideas, and by keeping their familiar ceremonies, All Saint’s Day and All Soul’s Day evolved into the celebrations that today honor the dead with color, candles, joy

The Aztec and Mayan beliefs

The Aztec, Mayan and other indigenous traditions have enriched the Mexican’s attitude about death. From these ancestors has come the knowledge that souls continue to exist after death, resting placidly in Mictlan, the land of the dead, not for judgment or resurrection; but for the day each year when they could return home to visit their loved ones.

Daily life in ancient Mexico was so uncertain and difficult that death was expected at every turn. Death, in fact was revered, believed to be the ultimate experience of life, life’s own reward, even welcomed as a better option when people are struggling for survival.

The Mexican still views death as a transition of life, a normal stage in the circle of life on earth, a natural progression, not an ending.

Writer Octavio Paz commented about his people’s relationship with death saying, “The Mexican is familiar with death, jokes about it, caresses it, sleeps with it, and celebrates it. It is one of his favorite playthings and his most steadfast love.”

Los Dias de Los Muertos is a time for remembering friends, family and ancestors. A lovely tradition that resonates with the center of the belief was retold on the website Latino.com by Victor Landa, from San Antonio, TX.

Landa quotes the legend, “In our tradition, people die three deaths. The first death is when our bodies cease to function; when our hearts no longer beat of their own accord, when our gaze no longer has depth or weight, when the space we occupy slowly loses its meaning.

The second death comes when the body is lowered into the ground, returned to mother earth, out of sight.”

The third death, the most definitive death, is when there is no one left alive to remember us.”

The act of preparing an altar by placing photographs, flowers, candles, favorite foods and drink of the loved one provides a special time to remember, and to transform grief into acceptance. The living invite the spirits of the family to return home for a few hours of laughter, tears and memories.

An important aspect of the holiday is the closure that it provides for families who have lost a loved one during the previous year. Without embalming, burial must take place within 24 hours of death. During this short period, the body is laid out in the coffin at home, surrounded by candles, flowers, family and friends. While the family and friends gather, and sit in vigil during the night, then return for another week to recite the rosary, there is often little time for acceptance or reality. Preparing for the return of the spirit each fall lets the family remember and honor their dead, and gives them a chance to heal.

Some families prepare the altar of offerings at the family grave site, lighting a candle for each dead one, remembering the names, and placing flowers or coronas (wreaths) at the cemetery. Many stay to visit, eat, drink and pray while they keep a vigil during the night. All night, throughout the cemetery there is a grand family reunion of huge extended families, alive and dead, as one by one, through stories, memories and dreams, the dead return. On this night, those who wait realize the importance of living to be well remembered, working to be well respected and loving to be well missed.

Once the night has passed, and the spirits have returned to their world, the ones remaining known that for another year they have triumphed in the struggle of life and that the only way to celebrate death is to live with courage. They have faced death and have won, saying, “Look here, you old bald skull – you fleshless one – you didn’t get me – I have survived to live again today.”

Even families with very limited budgets spare no expense when preparing the altar to honor their family. They want their spirits to enjoy the offerings and to return each year to continue this special spiritual companionship.

The altar is prepared in a place of honor in the home, using empty boxes on a table to form a pyramid of three or more levels, then a white tablecloth covers it all.

Four candles are placed on the top level to represent the cardinal directions. A candle is lit for each dead family member, and one extra so that no one is left out. The candles, which represent hope and faith, burn during the night, so that there is no darkness.

Copal is the resinous sap of a Mexican tree, burned as incense since the time of the Aztecs as an offering to the gods. On the Day of the Dead altar, the scent attracts spirits, drawing them home. It is also used to cleanse the area, and to ward off evil.

While most altars are laden with the favorite foods, sweets, drinks, and harvest fruits of each family spirit, even the most basic altar includes these basic needs:

A washbasin, soap, towel, mirror and comb are placed nearby so the spirits can clean up when they return.

The hand crafted skeletons, Calaveras are funny and friendly rather than frightening or spooky. They represent the beloved dead ones, their occupations and hobbies. As they are placed on the altar, the delightful skeleton figures bring back fond memories and cause the grieving ones to smile. The figures with the smells of favorite foods, help the spirits find the right house.

Three calaveras, which represent the trinity, are placed on the second level.

Colorful tissue paper, papel picado, is cut into intricate designs and strung to flutter over around the altar. This custom comes from the Aztecs who used paper banners in rituals. The colors used represent:

Black for the Prehispanic religions and land of the dead

Flowers, symbolizing the brevity of life, are massed and fashioned into garlands, wreaths and crosses to decorate the altar and the grave. The marigold is the most traditional flower of the season. In Aztec times it was called the cempasuchil, the flower of 400 lives.

The fragrance of the cempasuchil leads the spirits home. Sometimes paths of the petals lead out of the cemetery and to the house to guide the spirits. A cross of marigold petals is formed on the floor so that as the spirit approaches the alter, he will step on the cross and expel his guilt.

Personal items of the spirits remembered, the child’s toys, household saints, photos of those honored are added to the altar, along with the tools and utensils used each day, serapes, guitars or drums, gourds for carrying water and cigars or cigarettes.

The Mexican flatters and woos death, he sings to her, dances with her, lifts his glass to her, he laughs at her. Finally, he challenges her, and in the challenging, death loses her power to intimidate him Once he knows death intimately, death is no longer wrapped in a cloak of mystery or causes him to fear the darkness.

Once the fear of death has been defeated, the clutch she has on the hearts and minds of the living is lessened once and for all. Death’s morbid side is buried under music and remembrances, while skeletons laugh and dance and sing as Mexico celebrates life in its embrace of death. 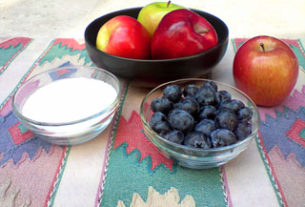 Are you related to the Aztecs?