I should explain at the outset that I have lived in Ajijic on the shores of Lake Chapala for the past five years and there are days when I’ll admit I feel surrounded by Americans and Canadians. I can see all the reasons for living here as happily as I do — the climate, the cost of living and the presence of so many friends and acquaintances and all the activities they generate. It’s no wonder that we outsiders number in the thousands here. 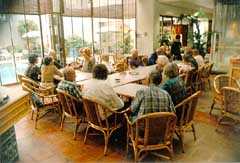 Which is why it’s a surprise to visit a likeable, livable city like Morelia for the first time and find there’s almost no gringo community there. In fact, one resident put the number at 100 to 150 total. And only a handful of those are the retirees who are so prevelant in Jalisco. Most Americans, for example, are associated with the university in Morelia, as both teachers and students. On Wednesday evenings a number of American residents, mostly retirees, get together at the Holiday Inn at 5:00 for drinks and conversation and the exchange of a few paperback books and magazines. (Editor’s note — the group now meets at the Fiesta Inn.) The night we were there 20 people attended, plus my wife and I. I was told there have been evenings when only two people showed up.

Everything is informal and unstructured. No one seems to want to start a club or any kind of organized activity. The very suggestion makes them throw up their hands. Which seems strange to this Lakesider who belongs to a regular weekly book club, a bi-weekly discussion group, a computer club and who hosts a regular Wednesday night poker game. I should also add that my wife drives visitors on Thursday morning fund-raising tours of the stately homes of Ajijic.

I’m sure critical mass has something to do with it. Obviously something or someone attracted people to the Lakeside once there was a nucleus of people there. When a sizeable number of people arrived, then the clubs and activities were born. But why didn’t a similar process take place in Morelia. 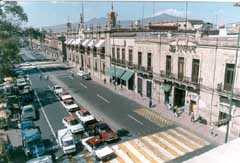 It’s an attractive city, with a wonderful climate. It has an international airport and is within easy reach of several other Mexican centers. It has first class shopping. Even those who like American style shopping can find Wal-Mart, Price Club, Office Depot, Blockbuster Video, Ace Hardware, and more. The city has arts festivals and lots of cultural activities. El Centro is attractive. In fact, it’s a UNESCO World Heritage Site and its many, many historic buildings are protected, making El Centro particularly appealing. Yet, among all those historic buildings you’ll find lots of coffee shops, cyber cafes and other up-to-the minute attractions.

In fact, there are days when you think there’s just too damn much shopping in Morelia. For some reason, city authorities have allowed vendors, literally by the thousand, to set up stalls selling everything you can think of all over El Centro. Every street is covered and no sidewalk seems to escape. It makes for enormous clutter and also makes the zocalo one of the least attractive and interesting of any Mexican city that we have seen. For example, during eight days in Morelia we never heard a single note of live music being played.

Nonetheless, it’s an extremely attractive city overall. The cathedral, which took 104 years to build, is a place you must visit if you go there.The nearby Casa de Artesanías features work by hundreds of artists, in all media. It’s the kind of place that made me wish I owned a bigger house so I could have made a few purchases. The city also has other attractions, such as a zoo and a planetarium.

It isn’t that I’m advocating that Morelia should have a huge colony of Americans and Canadians running all kinds of clubs and organizations and charities. There are times when many of us at the Lakeside area become a bit apprehensive about the effect we may be having on the local community, even though it’s also easy to point to obvious benefits. Morelia is light years away from that kind of “gringo saturation.”

During our short stay there we met some very attractive people, people we’d like to know better. Let’s start with our hostess, Janie Salinas, living in her 300-year old house in El Centro. She and her late husband, Greg, bought the place 20 years ago for $30,000 and, today, Janie sounds as though she wouldn’t take any offer on the place. 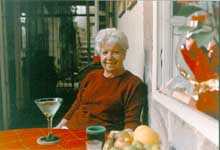 Jennifer Rose, a regular contributor to Mexico Connect, also has a house in the Santa Maria area, a ten-minute drive from El Centro. We were happy to spend a few nights house-sitting there, keeping an eye on her property and her dogs while she made a quick out-of-town trip.

There must be something about writers being drawn to each other because almost all of the people I talked to at that hotel get-together were involved in writing in some way.

Brian Schaefer, a businessman turned author of childrens’ books was the first one. He is new to Morelia but seems ready to settle there.

John Parkyn, a former New Zealand journalist, now married to a Mexican lady, is living fulltime in the Santa Maria area and is working on his first novel. 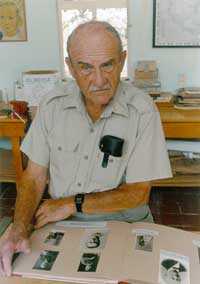 And, in the household of Hans and Marj Nienstaedt, Marj is at work on her fourth book of poetry. This one will be published in both English and Spanish. Husband Hans, a Dane, 77, is a former forester who is working on a detailed family genealogy that covers eight generations of people in Denmark, England, Russia, Germany and, now, Mexico.

Hans was in forestry all his life. He has a Master’s degree in forest management and a Ph.D in Forest Genetics. He has hiked all over the area surrounding Morelia and is still consulted in his field. Both he and Marj are multi-lingual.

All of these people know each other but, apart from mild socializing, don’t make any attempt to do anything in an organized way as a gringo “community.” Also, particularly in the case of the Nienstaedts, they have many Mexican friends and neighbors.

Of course, the answer to the question posed in the title of this article may simply be that no one has promoted the place.

In the case of the Guadalajara and Lake Chapala area I can think of two promoters who were responsible for bringing many, many people here — Fran and Judy Furton in Guadalajara and Curt Hyman, a Canadian, in Guadaljara and the Lakeside area.

My wife and I came here five years ago as a direct result of reading and subscribing to the material produced by both parties. Indeed, we attended one of the Furtons’ Tuesday seminars within forty-eight hours of arriving in Guadalajara. I particularly remember the late Judy warning us about the dissolute “country club” life out at the Lake. Nonetheless, that’s where we ended up.

For Canadians, Curt Hyman did a particularly effective job of describing life in Mexico with his monthly newsletters. He — and the U.S. dollar exchange rates — must surely be a primary reason for the large proportion of Canucks living here or visiting regularly during the winter months.

I realize that living in a community where there’s such a large and powerful group of outsiders may not be everyone’s desire. And it’s possible that future developments may be more than the Lake Chapala area can safely tolerate.

Nonetheless, following a month-long tour of several Mexican colonial cities, my wife and I agree that, for the moment at least, as “gringos,” we are living in the best place. We loved Morelia and would consider it as a possible place to move to someday. But in the meantime, we appreciate the frequent brunches and comidas we enjoy with friends, the ease with which we can trade books, magazines, videos and CDs, the ease with which one can find assistance with computer problems, or other problems, for that matter. They’re the benefits that come from having that critical mass of people one can relate to with the least number of language and cultural barriers.

After our month-long tour we realize even more that Mexico is a truly wonderful country with a great climate, lovely people and more history and culture than we ever imagined. However, for day-to-day living, we also appreciate the presence of a substantial number of our own kind of people. There’s absolutely no substitute for the friendship and support that follows from all of the people we’ve met in the past five years.

As for Morelia, we would cheerfully go back there anytime for a visit. And if the day ever comes when the Lakeside area simply becomes too North Americanized, it would be high on our list of places to escape to.

Personally, I was rather taken with the Santa Maria area. Those houses high on the long ridge above the city looked awfully attractive with their fabulous views of such a unique and beautiful city.

3 thoughts on “Why are there so few ex-pats living in Morelia?”