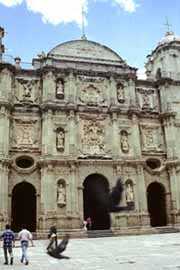 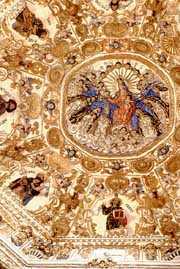 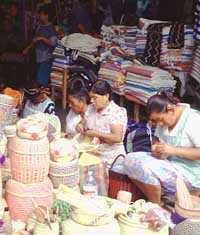 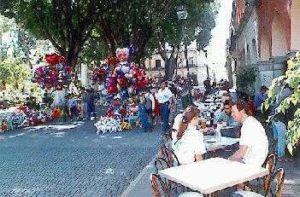 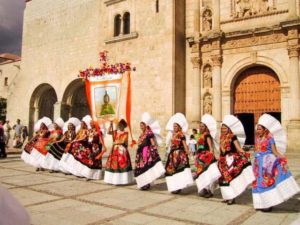 What is it like in Oaxaca? It’s like no other place in all of Mexico. It is as close to a true mixture of the various Mexican cultures as can be found. Visitors to Oaxaca City will find a large number of Zapotec Indians, descendants of the great Zapotec Empire, which existed even before the Aztecs or Mel Gibson.

Colonial Oaxaca may be one of Mexico’s poorest states, but it is rich enough to have produced the great Benito Juarez.

When traveling to Oaxaca, you might want to go during the last two Mondays in July, and partake in, or just watch as others partake in, “The Guelaguetza” (the offering) and check out the colorful regional dances.

We saw The Guelaguetza danced by professionals at the five-star Camino Real Oaxaca, the former convent of Santa Catalina, when my friend, Tomás, and I stayed there. It’s one of the most beautiful hotels in the world, built in 1576, and meticulously restored to its former Spanish baroque style of architecture. The original stone floors remain cool on warm summer nights, and wide stone archways, supported by massive, thick pillars, are a study in graceful design. Steep stone steps leading to the second floor are smoothed low and deep in the center like a wide “U,” due no doubt to the many spiritual feet that once trod there.

The feet we witnessed one evening were far from spiritual. They were dancing The Guelaguetza. The Guelaguetza is performed weekly, and was to be performed that very night in the Camino Real’s vast dining room. Observing the performances of these magnificent looking dancers sporting massive feathery headdresses that would make Florenz Ziegfeld pea-green with envy, was as exhausting as spending ten days on a treadmill in your local gym with a 50 pound bale of hay tied to your head. They whirled, twirled, leaped and cavorted, sometimes as lovers and other times as warriors. It certainly is an effective way to get one’s heart started.

Food was set up at a long table at the back of the room, and diners had time to return for second helpings before the show began. All in all, it was a most pleasurable experience and it had it’s extremely amusing moments. When Tomás I and first entered the dining room, we saw no vacant tables, so we took two empty seats at an otherwise-occupied table for ten. In an effort to be friendly, one of the diners asked Tomás what he did for a living. Just for fun, knowing we would never see any of these people again, he replied, “I’m a rocket scientist,” and the man beamed and cried, “What a coincidence! That is what we do! This is our annual conference of rocket scientists!” I’m not making this up. It really happened.

A sight not to be missed at Camino Real is the beautifully carved stone basin called Los Lavaderos (the laundry), located in the center of one of the hotel’s patios. It’s where the Dominican sisters of the convent used to wash clothes by hand using water from the city’s aqueduct. It is only one of many calming areas in this place of beauty and history.

Walking from the Camino Real to the Zócolo about four blocks away, we discovered art galleries, charming shops with reasonable prices, and the magnificent Santo Domingo Cathedral with incredible frescoes and artwork on every inch of the interior. This Cathedral boasts a ceiling so profuse with golden portraiture that one’s neck can get stuck in a permanent crick from trying not to miss anything. One gets the distinct feeling that Michelangelo himself may have inspired the artists. Santo Domingo Cathedral surely has more gold in it’s interior than there ever was in Fort Knox.

The Zócolo features many wonderful restaurants with tables both inside and on the sidewalk, serving what Oaxaca is most famous for: mole. The chicken mole negro is a memorable eating experience even Wolfgang Puck cannot equal, and the quesillo-stuffed fried squash is probably better than in other cities, as is nopal cactus salad, and chicharrones, the like of which you’ll rarely find elsewhere.

The eyeballing is fabulous. To watch the street musicians, vendors, and children in the Plaza Principal with their special elongated balloons used in nightly dueling, is better than television; one never tires of it. Music abounds and, if you want to drive the tuba player crazy, just stand there sucking on a lemon, for he cannot play if he salivates.

For more than two thousand years, Zapotec and Mixtec families have come from the countryside into Oaxaca City every single day to sell their wares, as did their parents and grandparents before them. The market is a cultural extravaganza that titillates all the senses simultaneously with violent colors, intense fragrances, buzzing conversations, fabrics at once soft and rough, and the blissful taste of mole.

In the bustling Oaxaca market, every type of mole is available: chocolate, verde, rojo, coloradito and amarillo. You can watch someone with generations of experience grind cacao beans for hot chocolate, and better chocolate does not exist on the planet, not even in France or Hershey Pennsylvania.

The food and sightseeing are wonderful both within and without Oaxaca City limits.

Twenty-four miles outside the city, you will find two of the most interesting sights in the world: Mitla, a fascinating and sacred place that has been there since 900 B.C. and, six miles west of Oaxaca City lies Monte Albán, the first city in North America, with its tombs, courts, and pyramids, there since 200 B.C.

When women visit these historical sites, they should be sure not to wear a dress, as the steps are extremely high. Men shouldn’t wear dresses either for the same reason. It boggles the mind to think how the original builders, probably slaves and shorter than people are now, could maneuver up these heights without tearing more important things than their loincloths by such stretching. Talk about a Thighmaster!

On the way back from Mitla, we stopped in the town of Santa Maria del Tule to see the Arbol del Tule, a tree that is one of the oldest living things on earth, and which stands in the churchyard. This mighty tree has a circumference of over 160 feet at its base. It has been around at least 2,500 years and possibly as long as 3000. It is an amazing thing to walk around it and realize how much history has taken place since it was a mere sapling.

While there, we noted more Mexican tourists than foreign.

Also in the outlying areas of Oaxaca City, we discovered the gloriously talented rug weavers of unparalleled artistry working with all-natural dyes. They kindly paused in their work to answer our questions about their art, and even invited us into their homes for some Mexican coffee. We then bought some of the world-famed black pottery that is sold along the roadways leading to Oaxaca City, as well as unbelievably magnificent wooden carvings of animals, later decorated with tiny, museum-worthy, intricate designs. Again, the artists invited us to take part in humble luncheon fare with their families. Oaxacan art is sold everywhere, but to see it actually created before one’s own eyes is fascinating, and the kindness of the artisans will be remembered for a lifetime.

We happened upon a village traditional wedding, surprisingly lavish in its dress and music. A local band accompanied the wedding procession down the town’s dusty main road, blaring happy Mexican tunes. Later research provided the answer to “How can a town so obviously poor host a wedding so extravagant?” The entire community always pays for the weddings of villagers as it does for all rites of passage, including baptisms and funerals. Everyone is regarded as a member of one big family. Rarely do the bride and groom set up housekeeping right away but remain living in the home of the groom’s parents for several years. Then all villagers show up to build a new home for the couple, from cutting down the trees to preparing the lumber for a simple wooden hut. If this “debt” to their neighbors cannot be repaid in kind by the husband and wife during their lifetime, it will be inherited by their children. This is a powerful and loyal way of life that has held together even when Mexico as a nation has gone through political disarray.

Oaxacans express themselves politically by parading peacefully through the city. True, there was a great deal of negative political influence after the last election, causing unusual notoriety, but that appears to be over.

Now that we can once again safely visit this illustrious, historical, and artistic city of light, we must appreciate its wonders before the economic inequities of the global economy destroy its way of life, replacing cotton with acrylic, pottery with plastic, and traditional clothing with jeans and T-shirts.

I am planning my fourth trip to Oaxaca this year and hope to find it as I left it: brilliant, friendly, and joyful.

Who is Subcomandante Marcos