Photo gallery: Obsidian in Mexico: gift of the gods 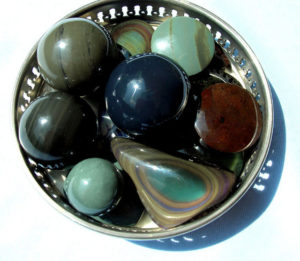 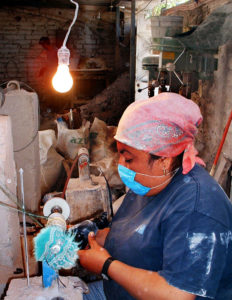 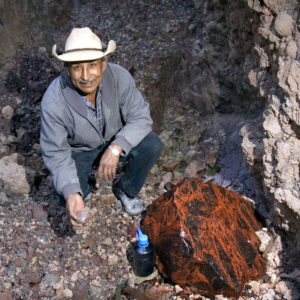 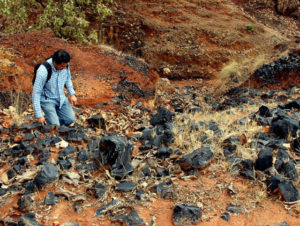 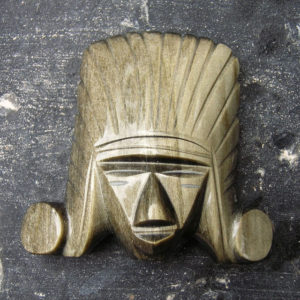 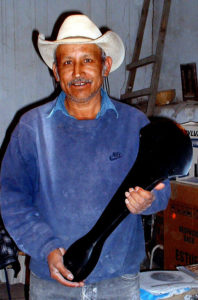 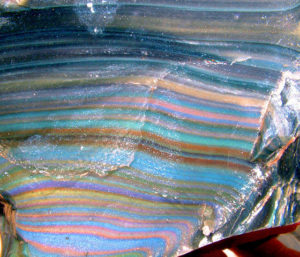 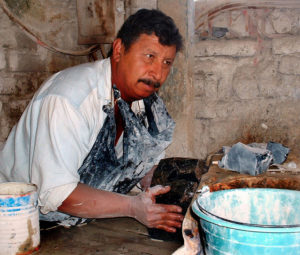 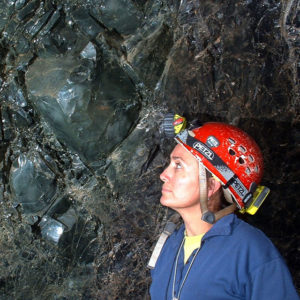 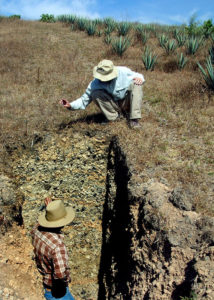 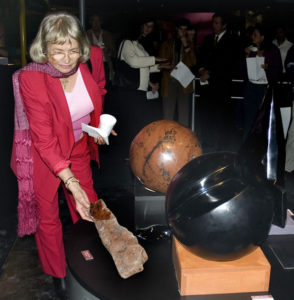 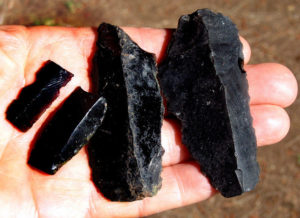 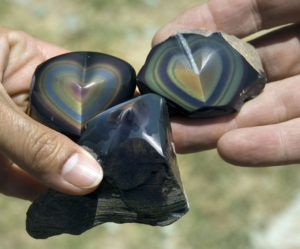 The third-largest deposits of obsidian in the world are found west of the city of Guadalajara and are superseded only by the deposits of Africa’s Rift Valley and the Oregon Plateau. Obsidian forms when lava cools quickly or is degassed in other ways.

West Mexico’s obsidian probably began as lava oozing out of cracks in the side of Tequila Volcano several million years ago, well after the volcano’s more dramatic eruptions into the air. Less than 90,000 years ago more lava came forth from the Colli area, where today we find the Primavera Forest. As a result, the Tequila-Colli axis became one of the world’s greatest ancient mining zones for this natural glass, providing the pre-Columbian inhabitants of what is now western Mexico with a priceless “gift of the gods,” which dramatically shaped their destiny.

Curiously, most of the people living in the Guadalajara area today have never seen an obsidian mine and few would recognize a piece of obsidian lying at their feet even though the ground is strewn with it for at least 100 kilometers west of the city.

The many colors of obsidian

I confess that I, too, had very little interest in obsidian until the day I walked into Don Eleno’s obsidian workshop in the sleepy village of Navajas, located 30 kilometers southwest of Guadalajara.

Don Eleno was a little man wearing a sombrero and a warm smile that radiated serenity. He led my wife Susy and me into a cinderblock yard partially covered by a tin roof. The air was filled with dust and the roar of spinning grindstones.

“This is my partner Manuel,” said Eleno over the din, taking us to a big man in bib overalls who was pushing a huge chunk of obsidian into a howling buzz saw — with his bare hands. Fortunately, they switched off the noisy machines as Eleno led us to a table covered with objects representing the most recent output of the workshop. “¡Ay qué bonito!” exclaimed Susy, picking up a sleek, ultra-modern black sculpture of a cat. In fact, all the other pieces on the table were just as attractive: some representing animals, some just simple forms, some very chic, and all of them beautifully polished.

“This sphere is made of sangre-de-indio (Indian Blood) obsidian, said Eleno and these pieces, well, you have to take them into the sun to appreciate their colors.” To our amazement, a tear-shaped piece which seemed black in the shade suddenly came to life in the sunlight, revealing bright bands of color deep beneath the surface. This, we were told, is known as rainbow obsidian. By now, Eleno and Manuel were bringing us other pieces, which, when turned in the sunshine, glimmered with a golden or silver sheen.

The artisans of Navajas had started out producing small hearts and butterflies, but as time went by, a benefactor began to bring them clay models made by accomplished Mexican sculptors, challenging them to render these works of art in obsidian. As a result, Don Eleno and friends were soon creating elegant sculptures which have found their way to museums and even to homes overseas.

After marveling at the many colors of obsidian in his workshop, we asked Don Eleno where the raw material had come from. “The sangre-de-indio obsidian is from a hill just outside Navajas,” he told us, “but we trade with people as far away as La Lobera, a little town about 65 kilometers north of here. That’s the place where the best rainbow obsidian comes from.”

Once our sights were fixed on locating different colors of obsidian, we were inevitably led to the one man who knows more about the subject than anyone else in the area: archeologist Rodrigo Esparza, whom we now refer to as “the Obsidian Detective.” Esparza explained to us that the colors in obsidian come from traces of different minerals embedded in it. “A microscopic amount of iron gives you red, while a tiny bit of copper makes it green.” Once upon a time archeologists went to great lengths to describe all the colors in an obsidian knife, for example, in an attempt to pinpoint where in the world that object had originally come from. This approach was not very successful and it was only recently that a breakthrough occurred.

“Neutron Activation Analysis now gives us a printout of every last trace element in a piece of obsidian,” says Esparza. “We have exact measurements of rare elements like rubidium, lanthanum and molybdenum and we can now prove that an obsidian artifact unearthed in California, for example, originally came from an obsidian mine in the Mexican state of Jalisco. Imagine how useful this is for determining pre-Columbian trade patterns.”

From this archeologist we learned a lot about the many ways obsidian was used in the past. To our surprise, we discovered that no metal knife on earth can have as sharp an edge as an obsidian blade. This is because obsidian is glass and has no crystal structure, whereas metals are limited to the structure of their crystal boundaries. An obsidian scalpel is said to be many times sharper than a metal one.

The Spaniards discovered all this the hard way when they first encountered the Aztec macahuitl, a flat wooden sword tipped with obsidian blades held in place by chicle. It is said the Mexicans could slice off a man’s leg with this sword and chronicler Bernal Diaz del Castillo describes the decapitation of a horse by macahuitl:

Pedro de Moron, was a very good horseman, and as he charged with three other horsemen into the ranks of the enemy the Indians seized hold of his lance and he was not able to drag it away, and others gave him cuts with their broadswords, and wounded him badly, and then they slashed at the mare, and cut her head off at the neck so that it hung by the skin, and she fell dead.

Of course, obsidian was also used to make arrowheads, scrapers, jewelry and a wide range of objets d’art. Modern artisans still scratch their heads trying to figure out how the Aztecs produced the paper-thin disks they sometimes used as earrings and pendants.

In the course of time, we have hunted for deposits of rainbow obsidian high in the mountains and found blue, black, grey, red and chocolate-colored obsidian in the cool oak and pine forests less than an hour’s drive from Guadalajara.

Perhaps the most curious obsidian deposit of all is the mine of San Isidro Mazatepec, which can only be enter by crawling on one’s hands and knees. The mine is 35 meters long and as dark as a cave. It also has a colony of vampire bats that looked none too happy about our intrusion into their inner sanctum.

The combination of darkness and vampires were precisely the factors that inspired archeologist Phil Weigand to invite our caving club to take charge of surveying the mine and producing an accurate map of it. Crawling through an obsidian mine turned out to be a novel experience for us, as we must usually watch out for delicate calcite stalactites overhead, but in this case we were ducking thick, razor-sharp spears of obsidian.

At last we came to a big side room, the farthest reach of the mine. Here we found a large chunk of black, yet distinctly green-tinted obsidian, protruding from the wall. It was obvious that miners had carefully chiseled away part of the wall with the intention of freeing this particularly large and beautiful piece. Evidently, something had prevented them from finishing the task. Could it have been the shouts of arriving conquistadores? And how many centuries ago had these indigenous miners dropped their tools, crawled out of the mine and possibly fled for their lives? Standing in the utter blackness, touching and examining this uncompleted job allowed me to feel the flesh-and-blood reality of these previous inhabitants of Jalisco in a way that no pyramid or ruin has ever done.

Indeed, to people without metal tools, obsidian must truly have seemed a divine gift, providing them with the sharpest imaginable blades and arrowheads for hunting, eating and fighting as well as a perfect medium for artistic expression and even allowing them the luxury of high-quality mirrors. In addition, this substance — so plentiful in this part of Mexico — was scarce in many other places and therefore invaluable as a trading commodity.

We know that obsidian mining and shaping was big business in pre-Columbian western Mexico because archeologists have catalogued more than 1,000 mines and quarries in the area and estimate that there may be up to 4,000 more. They calculate that over 2,000 tons of artifacts were produced from the high-grade obsidian found in the two largest deposits, La Joya and El Pedernal.

The procedure was to shape pieces of good quality into truncated cones, or cores. The very best of these were then taken to an island in the former Laguna de Magdalena to be turned into useful tools or beautiful jewelry. The island was once known as Itzlitlán. Itzli is “obsidian” in Nahuatl and tlan means “place,” so this island is the “Place of Obsidian,” and here excavations have revealed layers of debris several meters deep, proving that the island was in continuous use as a huge obsidian workshop for 2,000 years, going back to the very foundation of the great Teuchitlán Nation and stretching right up to the arrival of the Spaniards.

On Itztlitlán Island, skilled artisans would place an obsidian core on the ground between their feet. Then, with a round “hammer stone” in one hand and a deer-horn or bone chisel in the other, they would skillfully tap the top of the core and break off long, razor-sharp sticks of obsidian which were then formed into prismatic knives, arrowheads, scrapers, etc.

In the 1930s, the lagoon was drained by the government (even though it was considered sacred by the native peoples) and the island was turned into just another hill, today known as El Cerro de Las Cuevas, located north of San Juanito Escobedo. For two millennia, however, Itzlitlán was possibly the largest obsidian workshop in the world and the heart of the economy of more than one civilization.

How far through the Americas the influence of Jalisco’s obsidian technology and trade reached is a study that has only barely begun, thanks to the development of Neutron Activation Analysis. Artifacts made in Jalisco have already turned up as far north as Arizona, where it has been proven that the Anasazi and Hohokam peoples used tools made from Jalisco obsidian. If more surprises of this sort are forthcoming, archeologists may be obliged to rethink the influence of tiny Itzlitlán Island and western Mexico’s vast obsidian deposits on the pre-Columbian history of the Americas.