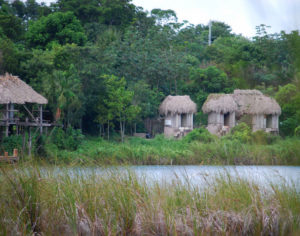 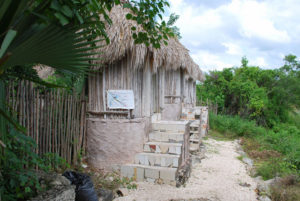 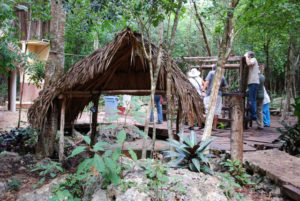 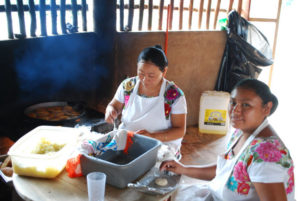 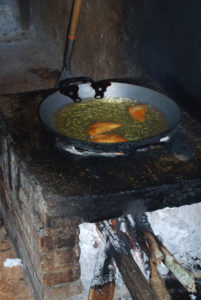 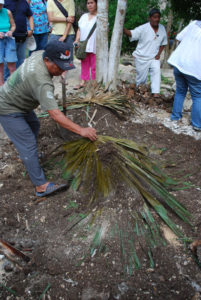 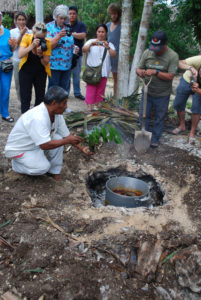 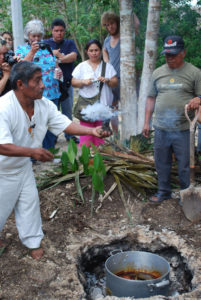 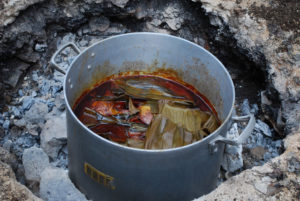 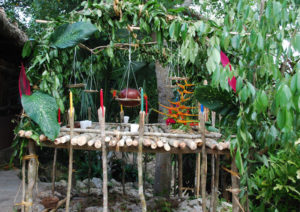 The monkeys, they tell me, are asleep in a cave across the lagoon. But other than that disappointment, my trip to Pac Chen, a micro sized Maya village in the jungle of the Yucatan Peninsula, is the perfect way to step back in time.

To get here from Playa del Carmen, our home base, we traveled the bustling four lane coastal highway to Tulum and then headed east towards Coba, one of the many archaeological sites that dot this region where the Maya empire reigned supreme centuries ago. Northeast of Coba, the road turned into a paved path that seemed endangered of being encroached on either side by the jungle. We passed a smattering of thatched wooden huts, but the villages that we had seen on the major roads had all but disappeared. So far, we had been traveling for two hours and the sophistication of Rivera Maya, with its cruise ship ports, shopping plazas and restaurants, seemed even further away.

“When you see the tall palm tree, take the first road to the right,” instructed my friend Jeanette Rigter. The road to the right, which rose and dropped through lush, impenetrable looking forest, took us even further from civilization. There were, I noted, no electric lines.

“Pac Chen won’t be getting electricity until the end of the year,” Jeanette informs me. Needless to say, my cell phone screen reads “no service.”

At first, Pac Chen looks to be almost abandoned, thatched roofs over stick sided buildings seem empty of people. But after parking and walking a long narrow stone path, we come to the heart of this village, perched on the edge of a lagoon that is ringed by jungle growth and chit palms with their fan-like fronds.

The main buildings are the open air eating area with its grill inset into stone, a thatched hut that juts out over the water’s edge and is a good place to catch the breeze as it blows across the lagoon, and another open air structure, topped with thatch, where a series of hammocks are strung, swaying gently in the wind that lifts little waves off the lagoon. In a smaller building, four women mix masa into balls, then flatten them with their hands into perfect circles. They take scoops of mashed squash, dropping the mixture on to the circles and then fold them over to make empanadas, a kind of turnover.

One woman feeds wood into the fire that flickers beneath sheets of metal. Set on top are large skillets of bubbling oil. As the women finish their empanadas, they place them into the hot grease where they bubble as they cook. One woman scoops out glowing embers from another fire and carries them in a shovel to the outside grill where she places them underneath the comal or flat griddle. Once the surface is hot, she begins placing painted clay pots filled with rice, soup and warm tortillas on top.

Despite the heated work, the women look beautiful in their white dresses with colorful embroidery and I marvel how pristine and crisp the dresses remain. At home, my apron is coated with food remains within minutes of starting to cook.

As this part of the meal nears completion, the men, many of whom have been playing with the children of this small village (some 100 residents in all), begin to gather around the pib, the deep hole in the ground that was dug the night before. Under the ground is a big metal pan containing a pig which, covered with dirt and banana leaves, has been cooking on the hot embers for the last 12 hours. Cochinita pibil takes its name from the underground oven and is the centerpiece of our meal, and the ritual of uncovering the pot begins as the women finish their part of the dinner. The dirt is swept away and then the banana leaves removed, one branch at a time. The village shaman, an older man in a white cotton tunic and pants, arrives to say a blessing. He waves sweet incense and chants in the ancient Maya dialect which is distinctly different from Spanish as he circles the pib. We are here during the days leading up to Hanal Pixan, the Maya celebration of the Day of the Dead, and thus the celebration is geared towards this holiday of welcoming back those who have passed away. Though for us who don’t understand the holiday, the sugared skulls and elaborately decorated altars at first seem somewhat macabre, the holiday itself is very referential and welcoming to the spirits of the departed.

Once the shaman has completed this part of the ceremony, the pot is pulled from the earth and it is moved to a small outdoor altar, decorated with brightly colored flowers, that stands next to the outdoor grill. The shaman further blesses the meal and then the food is served by young girls, some looking no older than seven or eight, who carry big platters to the rows of tables that sit under the palapa or thatched roof terrace. More girls carry large pitchers of a hibiscus flower drink and horachata, a drink derived from rice. Taking the thick tortillas from the stack, we make tacos from the succulent and so tender pork that has cooked in the ground all night, and heap our plates with freshly-made empanadas and fill our bowls with a vegetable soup containing squash and corn and whose taste is delicate and rich.

Later, after our meal, we can choose to canoe on the kayak, take a walk through the jungle to Balam Kim, a cenote or water-filled sink hole where we can swim in its deep underground recesses, take a zip line ride or just lie in one of the hammocks with the sweet scent of jungle flowers filling the hot and humid afternoon air.

“Their life is very simple but very full,” says Jeanette about the villagers. Indeed, it seems that they without their electricity and miles from anywhere, and they have chosen well. 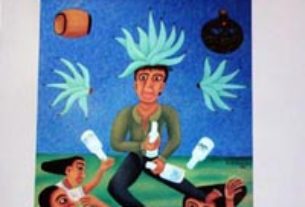