There wouldn’t be many Irish people in the United States if it wasn’t for a Mexican fungus.

The census of 1841 in Ireland recorded a population of about 8 million. This figure was a staggering 300% more than sixty years earlier. The staple Irish food at that time was the humble potato and Ireland’s rapid population growth during the early part of the nineteenth century was based on the so-called “potato economy”.

But if Ireland was bursting at the seams in 1841, just a decade later the population had fallen to 6.5 million and by 1900 to around 4 million.

The major cause of this decline was the Irish potato famine, during which millions died of starvation when their staple crop failed. Of those who survived the famine, many were forced to emigrate to greener pastures – to any place where a job would guarantee food and a roof over their heads. This tide of emigration carried many Irish people to North America, particularly in the north-east of the United States.

And where does a Mexican fungus come in?

Well, it turns out that the Irish potato famine was caused by a fungus (properly known as Phytophthora infestans) that originated in Mexico and which is capable of reproducing not only sexually but also asexually. This fungus results in a disease called “late blight” in which entire fields of mature potato plants may be completely destroyed within days. Both foliage and tubers are affected. The name “late blight” is appropriate since the fungus strikes late in the growing season, close to harvest time. Infected tubers are subject to soft-rot bacteria which render them useless as food. The discarded rotting tubers can easily re-infect the succeeding year’s crop.

One kind of late blight fungus, A1, crossed the Atlantic in the 1840’s, reaching Europe in 1845 before rapidly spreading across the continent to reach Ireland. Although cultivated potatoes (Solanum tuberosum) originated in Peru, the late blight fungus appears to have originated in the Toluca Valley of Mexico (just west of Mexico City) where it is found in several related wild-growing Solanum tubers.

After the Irish potato famine, farmers learned to control the A1 fungus through careful fungicide applications and better farming methods such as choosing varieties that had some resistance to late blight and planting only healthy tubers.

Since the 1980s, however, farmers have been fighting a desperate rearguard action against late blight as the direct result of the escape of a second kind of late blight, A2, into the cultivated potato population. The problem stems from the fact that A1 and A2 can reproduce sexually, with the potential to have offspring that are strains with more virulence or greatly increased resistance to fungicides. Having two different kinds of late blight as parents greatly magnifies the genetic variability available for future generations of the fungus.

The A2 fungus first appeared outside Mexico in the 1970s and has already spread, with serious economic consequences, to the Middle East, Africa and North and South America. It seems almost certain that it will eventually also disrupt harvests in India and the world’s largest potato producer, China. The A2 fungus is considered the most important threat to potato cultivation worldwide. The current response of hitting it with higher and more lethal doses of fungicide is not in line with public demands for “more natural” (“greener”) farming methods.

How did the A2 fungus escape from Mexico? It was probably unintentionally carried by potatoes exported to Europe during the winter of 1976-77. Europe needed potatoes because a drought a year earlier had reduced its potato yields significantly. Unrecognized, the fungus was then re-transported in seed potatoes throughout Europe and to the Middle East and Africa.

Scientists are now looking carefully at wild potatoes in the Toluca Valley in an effort to try and identify precisely which gene or combination of genes provides these particular wild potatoes with some degree of defense against the worst ravages of the fungi. The wild potatoes presumably must have some kind of defense since they not only contain both types A1 and A2, but continue to yield viable tubers. Mexico’s main center for potato research is the Agricultural University at Chapingo, near Texcoco, on the eastern edge of Mexico City. The University is well worth a visit – if only to admire the magnificent Diego Rivera murals, including one of the world’s great nudes. 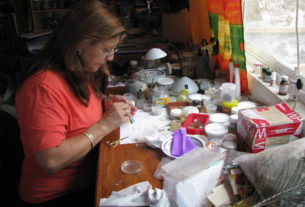