Inside Mexico
Paricutin, the volcano in Michoacan 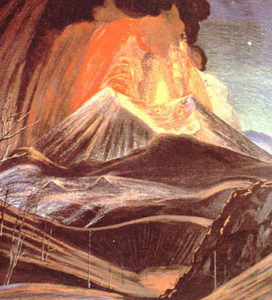 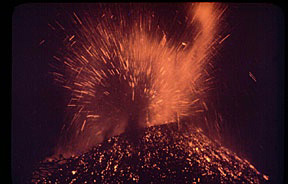 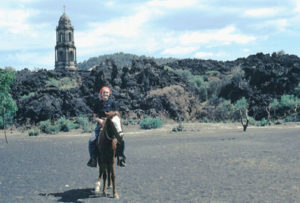 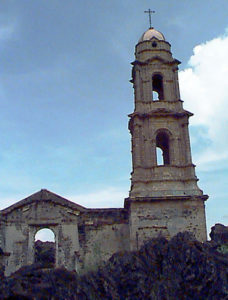 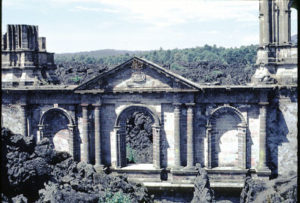 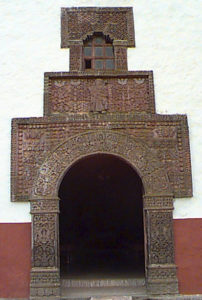 On February 20th, 1943, after a couple of weeks of ominous earth tremors and strange underground sounds, the Paricutín volcano in Michoacán, erupted among prayers and rogations, fire displays and intense noise. The church bells of San Juan Parangaricutiro, five kilometers down the narrow valley, rang by themselves, dancing with the moving ground. Frightened people, not knowing what was going on, talked about the end of the world and punishment from Heaven.

The lava river flowed at a very slow pace, about three meters an hour, but. black volcanic ash covered roofs and roads, fields and flora, destroying everything. There were no crops that year, and soon there was hunger in the land.

The villages of San Juan and San Salvador Paricutín, the last just one kilometer from the rising volcano, were in danger, but nobody wanted to abandon land and home. President Lázaro Cárdenas himself went to San Salvador and tried to convince the people to leave, but, to no avail. The same happened in San Juan, where the President recruited the local priest to speak in favor of the immediate evacuation of the area. The people from Angahuan, a small town above the valley, witnessed their neighbors’ fate with mixed feelings of anguish and relief.

In March, a new lava current aimed directly at San Salvador Paricutín forceing everybody to leave. They moved and founded the new town of Caltzontzin, on land assigned by the government, five kilometers south of Uruapan. Paricutín was completely swallowed by the volcano: and later, Caltzontzin by the urban development of Uruapan.

Meanwhile, the town of San Juan Parangaricutiro stood firm. By February, 1944, the speed of the lava flow was increasing, in spite of the prayers, masses and rogations. In April the river of melted rocks felled the wall of the cemetery. That was the sign for the people of San Juan to surrender their hopes. In the small nearby valley known as Los Conejos, Nuevo San Juan Parangaricutiro was born. “The men and women from San Juan left their dead, but took their memories with them.”

Today everything is tranquil and quiet again. The best way to access the area is to go to Angahuan, the town that survived the catastrophe because it is located on top of the mountains that delimit the valley where the Paricutín stands. From the “Balcony of the Paricutín” you may enjoy a nice vista of the valley below, the Paricutín volcano itself, and the towers of the church of San Juan, still standing above the river of frozen lava.

Angahuan was founded by a Franciscan missionary, Fray Juan de San Miguel, in the XVI Century. As in other parts of Michoacán, the architectural school known as plateresco -a mix of Spanish, Arab and Mexican native ideas- flourished here. The facade of the church of the town is a good example of the intricate designs which characterize this style.

From Angahuan, a winding trail leads down to the valley. Either walking, or on horse back, to go down there is a wonderful adventure. No tall trees, just scant vegetation. Little movement along the way. You can hear yourself as you walk and look and think. This is a silent, somber, almost magical place. The soil is a deep black jewel, glittering in the sunlight. (These are the same metallic ashes that caused so much trouble and pain to the women and men of San Juan.)

After a good walk through and over the solid trenches of frozen lava you will, finally, reach the ruins of the church of San Juan. It is quite an impressive view. An elegant tower rises above the lava, offering a sharp contrast against the rough, menacing waves of black from which they seem to emerge. The walls are still standing there, engulfed and surrounded by the black sea of volcanic rocks. Inside, a small niche protects an image of El Señor de los Milagros, The Lord of the Miracles, to whom the church was dedicated. Flowers and candles surround the icon, silent testimonies of a faith that is always present (in fact, the old town has never been forgotten. Every Holy Friday, the whole community of Nuevo San Juan marches in pilgrimage to their ancestor’s village. They sleep in Patzingo, attend to Holy Mass in San Juan, and lunch over their houses.)

And then, onward to the mountain! A short walk, five kilometers to the north this time. Climb, climb, climb. From the top, there is a majestic view. The paths of lava are clearly outlined from the mouth of the monster volcano to the valley below. The rocks are warm to the touch in one of the small pits. Just a reminder. After a rest to gather up whichever strength is left in you, back to Angahuan again, half-lost in dreams of very cold beer and soft, comfortable seats.

Angahuan is located in the central state of Michoacán. From Morelia, the state capital, take the autopista to Pátzcuaro and then to Uruapan. Then take Mex 37 to the north and Carapan. About 18 km from Uruapan there is a junction with the road that goes to Angahuan, another 20 km or so to the East. Regular bus service is available from Morelia to Uruapan and from Uruapan to Angahuan. 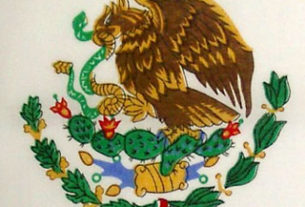